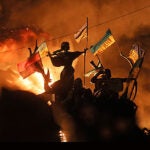 Marshall Ganz ’91, who is credited with devising a grassroots organizing model successfully used by President Obama, said Wednesday evening that religious faith can play a greater role in community organizing.

“Too often, the default position has been to take faith out of the conversation. We can’t have any God talk. People will be offended,” said Ganz, who is a senior lecturer in public policy at the Harvard Kennedy School, a member of the faculty of the Graduate School of Education, and a lecturer on social studies. “Secular fundamentalism has robbed many movements of their ability for moral expression.”

Ganz spoke as part of a panel titled “Faith-Based Community Organizing: How Working With the Religious Other Can Save the World.” The panel was held at the Harvard Divinity School’s Braun Room at Andover Hall.

Over the years, Ganz has been involved in many of the left’s most celebrated struggles, and he said religious faith played a role in each.

Faith provided fuel for the political and social movements of the 1960s and ’70s. Ganz was a voting rights organizer in Mississippi during the Civil Rights Movement, which was organized around African-American churches. Later, he worked with Cesar Chavez, helping to organize Catholic Mexicans farmworkers in California.

The son of a rabbi, Ganz said young people today don’t always make the connection between their faith and the social, political, or environmental change they seek.

“You didn’t just come out of the womb caring about justice,” said Ganz. “What do I care about, and what do we share, and what am I called to do in this world? Those are the burning questions. The answer may turn out to be a faith tradition.”

She recalled unsuccessfully trying to organize New York’s Orthodox Jews around the concept that restaurants should have both kosher food and fair labor practices. It was a lesson that religion and politics don’t always match.

“On the other hand, it’s so important to faith-based organizing — finding common values,” Rothschild said.

Rothschild had more success saving a program treasured by Orthodox Jews at her college, the University of Massachusetts, Amherst, when the people involved in the rescue effort didn’t identify as Orthodox. She said the emails, letters, and in-person pleas by Jews and gentiles restored the funds. The case also raised a critical question about interfaith organizing: Does branding a group by faith make that group more universal and relatable, or exclusionary?

“Thinking about the future of faith-based organizing: Do you want to be more particular?” Rothschild asked. “Is a particular faith-based identity enough to organize around?”

In the case of Boston’s Muslims, reaching out to Jews and Christians helped during a recent controversy.

Yusufi Vali, executive director of the Islamic Society of Boston Cultural Center, said the Roxbury’s mosque’s leaders and worshippers complained that their most consistent contact with the government was with the F.B.I.

In 2010, Vali was an organizer with the Greater Boston Interfaith Organization (GBIO). On behalf of the mosque, he said he approached Gov. Deval Patrick’s re-election campaign and got the Democrat to commit to a visit to the mosque and promise that he would visit others.

When independent Tim Cahill criticized his opponent’s visit as “playing politics with terrorism,” Vali rallied Jewish and Christian leaders to support the mosque. Cahill retracted his statement. Vali trumpeted the interfaith support and subsequent newspaper coverage of a rally as a victory for working beyond his faith.

Vali said that his decision to become an organizer is rooted in his religious beliefs. The Koran, he said, is replete with references to justice. But in building coalitions, Vali said, he looks beyond the beliefs of the people with whom he works.

“The focus has never been on: What do you believe?” Vali said. “It’s about your story. Whether you’re religious or not, we can work together.”

Harvard Divinity School student Usra Ghazi, a junior fellow at the Center for the Study of World Religions, moderated the panel. The event was part of her series, “Interfaith as Antidote: Models of Faith-Based Civic Engagement.”