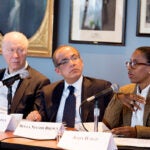 The doings at Davos

Jonathan Zittrain on the rise of a social media giant, born at Harvard

A decade ago, when people wanted to share vacation photos or muse about new movies online, they used MySpace or Friendster. Those star Internet destinations didn’t know it yet, but they were about to be broomed into the dustbin of history, thanks in large part to a Kirkland House sophomore named Mark Zuckerberg and his startup, The Facebook.

Facebook turns 10 Tuesday. Gazette staff writer Christina Pazzanese interviewed Harvard’s Jonathan L. Zittrain by email about its evolution from an online social directory for Harvard College students to a communications giant worth $135 billion and used by 1.2 billion people. Zittrain is a professor of law at Harvard Law School and the Harvard Kennedy School, and a professor of computer science at the School of Engineering and Applied Sciences. He is also the co-founder of the Berkman Center for Internet & Society.

GAZETTE: Facebook began as a kind of social directory for college students. How unlikely was it that something so narrowly cast early on would succeed on such a global scale?

ZITTRAIN: Well, there’s nothing so powerful as an idea whose time has come. Facebook had great execution, and it scaled at what turns out to have been just the right pace. But social networking was likely bound to take off — even if it might have looked more like Friendster in Facebook’s absence.

GAZETTE: Why did it evolve so quickly and deeply? What drove that growth?

ZITTRAIN: The college environment made for the ideal petri dish: lots of comparatively tech-savvy people eager to get to know one another, and not as guarded about privacy, especially since the early Facebook was indeed limited to those who could show a university email address.

GAZETTE: There have been conflicting reports that Facebook has begun losing cachet among younger users. What do you think are the company’s biggest challenges and challengers?

ZITTRAIN: Success can be its own challenge. A platform that has been adapted to so many purposes can find it difficult to satisfy them all. Just ask the makers of, say, Microsoft Word, which has to maintain legacy features for enterprise customers while also being fleet-footed for new uses.

GAZETTE: Is there a chance that privacy concerns will diminish Facebook’s popularity?

ZITTRAIN: I’m sure they already have. But it’s a small vector placed against a massive adoption curve. It’s interesting to me that Facebook hasn’t sought to build localized systems suited to different regions and sensibilities. It hasn’t had a MTV/VH1 split. That’s remarkable.

GAZETTE: What is Facebook today, and what do you think it will be in another five and 10 years?

ZITTRAIN: To me, the question is whether Facebook is, at the end, about managing one’s identity online. Every time someone signs on to a website using “connect with Facebook,” that’s interposing Facebook into an otherwise independent relationship. Currently Facebook’s value is seen in the context of knowing a lot about users — who, after all, specifically tell Facebook what they like and don’t like in a way that they don’t clearly tell a search engine — which in turn enables very targeted advertising. But identity might be a real goldmine over the long term.

GAZETTE: Where will the “next” Facebook come from? Is there an underserved area out there ripe for growth?

ZITTRAIN: I’d like to see better services tied to local communities, a way for people to meet one another in real space in a comfortable way.

GAZETTE: Facebook is now a dominant, mainstream business built on disruptive innovation. And yet two of the biggest technology companies in the world — Facebook and Microsoft — were started by Harvard students immersed in a classic college education. Does that tell us anything about the value of a generalized education as a driver of broad technological innovation?

ZITTRAIN: Both [Microsoft’s] Bill Gates and Mark Zuckerberg have had serious tech credentials alongside that generalist aptitude. I think being ready to combine both can help, not only with an initial success, but with the complicated moves needed to parlay it into a more enduring one.

GAZETTE: Many attribute Zuckerberg’s rapid success as being a catalyst for a palpable spirit of entrepreneurship all across campus, but particularly among undergraduates. Is that a good thing, or does it promote unrealistic and/or perhaps misplaced priorities?

ZITTRAIN: An unrealistic — and likely unhealthy — priority is to see coming to campus as a means of winning a Silicon Valley lottery. But to be able to pursue one’s own deep interests while being routinely taken outside one’s comfort zone by new friends and teachers, that’s the longstanding spirit here that can serve today’s generation of proto-entrepreneurs well, along with whatever comes in the next generation.