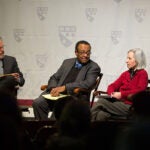 In Q&A, a look at the causes and effects of Kiev’s violent protests

Rallying against Ukrainian President Viktor F. Yanukovych, whose administration some critics call corrupt, anti-government protesters encamped in the city of Kiev’s Independence Square clashed fiercely with riot police this week, resulting in dozens of deaths of both protesters and police.

According to international news reports, hundreds of people have been wounded amid gunfire and explosions on both sides, in the worst violence since the protests began three months ago.

The Gazette spoke with Serhii Plokhii, the Mykhailo Hrushevsky Professor of Ukrainian History in the Faculty of Arts and Sciences and director of the Ukrainian Research Institute of Harvard University, about what’s behind the current wave of violence and any prospects for a peaceful resolution.

GAZETTE: What’s driving the anti-government protests, and who is behind them?

PLOKHII: It started in late November when the Ukrainian government unexpectedly refused to sign an association agreement with the European Union. They were preparing for signing that agreement for a very long time, so the expectations were really high. And then literally overnight they refused to do that. So that’s when mostly young people and students went to Kiev’s main square and camped there. Then a few days later, the government decided to disperse them, using force and violence, and that’s when much larger protests started. Basically it was in support of European integration, but also it was against the violence unleashed by the government. The protests were peaceful and sometimes even festive, and they were going for a long period of time during the height of Ukraine’s winter. It was on Jan. 22 that the first wave of violence happened. There were two or three people who were killed. After that, the government basically removed its riot police from Kiev’s main street, Khreshchatyk, and negotiations started. Negotiations were going along rather well until [Feb. 18]. What happened was that the opposition tried to register in the Parliament a bill that would allow the country to return to the constitution of 2004 that was changed by the current government. That would give more power to the Parliament [and] to the prime minister, and less power to the president. The current government apparently was afraid they didn’t have enough votes in the Parliament to defeat this bill, [so they] refused to register this bill — against existing regulations. …

GAZETTE: After months of relative quiet, why have peaceful protests suddenly turned violent?

PLOKHII: There are a number of explanations. The first one is that this return to the old constitution was viewed as a political compromise. But once the government refused to even register the bill, that meant that there was no prospect for political compromise, and the tensions grew. The second one was that Russia — which was from the very beginning part of this whole story of Ukraine not signing the agreement with the European Union — used the promise of economic assistance to influence the actions of the Ukrainian government. They offered the current government a badly needed loan of $15 billion. They released $5 billion in January and made the release of the rest of it conditional on the crackdown on the protesters. We know that because Mr. Sergei Glazyev, an adviser to Mr. [Vladimir] Putin, [the Russian president,] said that that’s what he believed should be done in Ukraine. On Monday [Feb. 17], we got the word that Russia was transferring an additional $2 billion. And then on Tuesday, they got this violence.

GAZETTE: Was Yanukovych’s rejection of the agreement with the European Union last fall confirmation for people that his government is under Putin’s thumb?

GAZETTE: What constitutional and political changes are the protesters demanding, and why?

PLOKHII: The story begins with the protests, nine years ago in 2004, known as the Orange Revolution. At that time, a compromise was reached where a new round of presidential elections was announced. But also there was agreement on changing the existing constitution and giving more powers to the prime minister, taking them away from the president, making the presidency a weaker office. So when the current government came to power in 2010, they voted to go back to the constitution of 1996, giving enormous power to the president. The opposition recently decided that going back to the constitution of 2004 was the only way to reach a compromise. But [the government] refused even to register the bill in the Parliament. They refused to register it because apparently they are losing support in the Parliament. For example, for introduction of the state of emergency, you need a vote in the Parliament; they’re not doing that. And by executive order now, they are trying to introduce something called “anti-terrorist operation.” These are all signs that the government doesn’t have enough support in the Parliament. They certainly don’t have support on the streets of the capital, and they’re using force.

GAZETTE: Does Ukraine have any democratic traditions? Is there hope of developing any?

PLOKHII: The democratic processes began in Ukraine during [then-Soviet leader Mikhail] Gorbachev’s Perestroika and Glasnost, creating an independent Ukrainian state in 1991. The tradition that developed was a tradition of peaceful resolution of political issues and problems. In 1994, under political pressure, the first president of Ukraine agreed to have early elections, and he lost those elections, and there was a peaceful transfer of power. In 2004, again there was another flare-up, but they reached a constitutional compromise. Again, there was no violence. This time, what is happening is going actually against whatever little political and democratic tradition Ukraine has in the sense that the current government refuses to compromise in any meaningful way. And that led to the clashes. We still don’t know what will come out of it, but what is happening is highly abnormal. No one expected that. No one could imagine something like that could happen in Ukraine because the tradition that developed over the 20-plus years was the tradition that they would find some kind of compromise.

GAZETTE: Why is Ukraine so important to both Russia and the European Union?

PLOKHII: Ukraine is the largest former Soviet republic after Russia, so Ukraine is crucial for Russia’s vision of rebuilding itself as a superpower. The Russian foreign policy doctrine is creation of a sphere of influence in the former Soviet space. And Ukraine is the largest country in that space — physically, in terms of the population, in terms of the economic weight, so in every sense. When it comes to the European Union, now the borders of the European Union are on the western borders of Ukraine. (Ukraine’s western neighbors — Poland, Slovakia, Romania — are all members of the European Union and members of NATO.) So, for the European Union, Ukraine is an important player in its immediate neighborhood. Georgia is another important country in that region. Europe, despite the financial crisis and political crisis, is involved and tries to be a player in the East European neighborhood. But there’s no question that the importance of Ukraine for Russia, given the way Russia views its role in the region, is bigger than the importance of Ukraine for the European Union, with the exception maybe of its immediate neighbors, Romania and Poland. That’s why Russia introduces sanctions and comes up with this carrot of $15 billion, where Europe never did that.  The EU is also unhappy with Russia throwing its weight around because Ukraine is not the first country that, at the last moment, refused to sign an association agreement with the European Union. Armenia, a few months before that, was bullied by Russia into not signing, as well.  This geopolitical context is also a significant part of the Ukrainian story.

GAZETTE: What role has the U.S. government been playing in the region? Are we likely to ramp up our involvement, either diplomatically or militarily, given the escalation of violence?

PLOKHII: The United States was one step ahead of the European Union when it comes to the idea of introducing sanctions against people in the Ukrainian government who are responsible for the escalation of violence. The European Union couldn’t agree on that. And the U.S. already a few weeks ago introduced some limited sanctions, taking away U.S. visas from some members of the government. It looks like the latest violence on the streets of Kiev pushed the European Union politicians over the hill. So now it looks like the United States and the European Union are together and tomorrow there should be … sanctions. … Some people are saying this is too little too late; the sanctions had to be introduced a long time ago, and that might influence the situation. But it’s difficult to say when is the right time, when is the wrong time to do something like that. I would be surprised if the involvement [by the U.S.] at this point would go beyond sanctions. Sanctions can be done on different levels, include different numbers of people, can deal only with the right to visit the United States and maybe can eventually lead to the arrest of bank accounts in Europe and the U.S. My guess would be that the U.S. would be more resolute in that sense than the E.U.

GAZETTE: With its close proximity to Europe and natural resources, why hasn’t Ukraine been able to thrive economically like other former Eastern bloc nations, such as Poland?

PLOKHII: What these protests are very much about is the corruption of the current government. Apart from the recent refusal to sign the E.U. association agreement, that’s what mobilized people. They looked at the association agreement with the E.U. as basically not the right to join the E.U. per se, but as a chance to bring European standards of conducting business in a transparent manner, to make courts independent from the government, and enhance human rights norms in their country without necessarily joining the E.U. It was considered by many in Ukrainian society as a step in the right direction, away from the state of corruption. And once that didn’t happen, that took away the last hope that people had that the government could be reformed and the situation could be improved.

GAZETTE: What’s likely to happen next? Is there any possibility that this conflict could be resolved in the near term to everyone’s satisfaction and without more bloodshed?