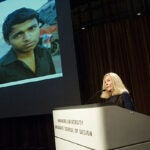 Max Tan ’15 came to Harvard from East Lyme, Conn., for his education, but he also came for this moment.

It was announced in a phone call from Benjamin Zander, conductor and music director of the Boston Philharmonic Youth Orchestra (BPYO), who invited Tan to be the featured violin soloist during the group’s March 7 concert.

Though Tan has been a musician with the orchestra since his sophomore year, “My first thought was: ‘Anyone else in the orchestra can probably do a better job than me!’”

For the concert, Zander said he chose “the sensuous and refined Barber Violin Concerto as the perfect foil for the tumultuous, overwhelming passion of the Mahler Fifth, which is the main work on the program.

“Then I thought about whom amongst the famous violinists on the concert circuit I could ask to perform it. Any number would welcome the opportunity to play with this fabulous youth orchestra in one of the most beautiful concert halls in the world, in one of the most musically sophisticated cities in the world. But then I thought, why? Max’s beautiful and unique violin tone is the embodiment of this music, and he is sitting right in the orchestra as one of the four concertmasters. Max has won the respect and affection of every member of the Boston Philharmonic Youth Orchestra through his leadership, his sweetness of nature, his deep musicality, and his coruscating virtuosity on the violin.”

Tan is part of a rare cadre of students who are working musicians. Late this month, he headed for Austin, Texas, for the week-and-a-half-long Yehudi Menuhin International Competition for Young Violinists, coordinating homework and missed classes with understanding professors.

“I feel like they complement each other in a certain way, academia and music,” said Tan. “I’m really lucky that I’m able to do both here.”

The 21-year-old, who started out on the piano, is a human developmental and regenerative biology concentrator undergoing, in his words, “a major life crisis.”

“I have no idea what I want to do,” he admitted. “In thinking about the concentration, this is probably as far away from music as I can get.”

He’s intrigued by the rapid-paced world of science, and, from his musical studies, understands deeply the discipline and rigor a career in science requires. But he also wants to pursue music, and maybe even do both.

On campus, Tan has performed with numerous groups, including the Brattle Street Chamber Players, the Dunster House Opera, and a solo engagement with the Harvard-Radcliffe Orchestra. He’s also made his mark by helping to establish the River Charles Ensemble, which made its debut at the Arts First festival two years ago.

The group was supposed to be a one-off, but after its Sanders Theatre concert, “people came up and asked about us and our future performances. So, we thought about it over the summer and began hammering out ideas.

“We didn’t want to be just another orchestra that simply performed a classical-music repertoire. We wanted another dimension and a community aspect. What we ended up with is a rigorous and enjoyable music program where people are learning from each other, collaboration is encouraged, where we learn how to play together as an orchestra, without a conductor. It’s like a mini-family.”

The group will play a concert in Sanders on April 19, and is planning a tour to China and Taiwan next January, a project Tan is spearheading with a team of other students.

“I find the community environment very rewarding. I learn so much about everyone and the music that we play,” said Tan of the group.

Tan doesn’t feign interest in pop music. He’s continually listening to the classical and chamber works he plays, attuned for “something interesting, something new,” he said.

Receiving Zander’s invitation was “extremely flattering,” said Tan, who when he plays is constantly at work on emoting, connecting with the audience, and enjoying the music in the moment.

“I always try not to play a piece the same way twice.”

The Boston Philharmonic Youth Orchestra will play at 8 p.m. on March 7 at Symphony Hall.