A musical is born, slowly 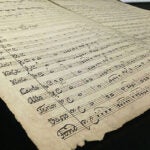 From score to workshop to stage, ‘Witness Uganda’ has defied both odds and pigeonholing

In 2005, Griffin Matthews was hoping to change the world for the better. But three days into his work at a Ugandan orphanage, he said he discovered that its director was embezzling money.

Stunned, the 20-something New York City actor took a walk to try to clear his head. On the road, he met a group of curious, young Ugandans who changed his life. They called him mzungu, white person, and peppered him with questions about his visit there and his life in the United States.

“I had gone all the way across the world, and I was a white person,” laughed Matthews, who is African-American. The teens showed him the cramped shacks where they lived, and explained how many of them had lost their parents to AIDS. When Matthews offered to help, they said something surprising.

Matthews, a graduate of Carnegie Mellon University’s School of Drama with no teaching experience, didn’t hesitate. He met them at the local library the next day, and there they discussed health education, public speaking, and their dreams for the future. His impromptu class turned into a daily meeting, and ultimately gave rise to Matthews’ Uganda Project, a nonprofit that sponsors education for the nation’s orphans.

His experience also inspired the new musical “Witness Uganda” directed by Diane Paulus and on view at the American Repertory Theater (A.R.T.) through March 16.

Like many a musical theater production, the show had a slow, gradual evolution. It began as series of songs written by Matthews and his longtime partner and fellow actor and director, Matt Gould, for a fundraiser for the Uganda Project in 2008. But the pair realized their work had touched a nerve when audience members crowded around them after the performance, eager to share their own experiences with relief work.

“People got so excited that we were telling this story of how difficult it was to help, and so we kept writing,” said Matthews, who plays himself in the show.

As their work blossomed into a full production, it caught the attention of award-winning composer and lyricist Stephen Schwartz, who oversaw a Disney/ASCAP workshop of the piece in 2010. Schwartz mentioned the show to his friend Paulus, the A.R.T.’s artistic director.

“I was knocked out by the music. It had a very original sound, and I always look at pushing the boundaries,” said Paulus of the show’s score, which blends African and American musical rhythms and styles. Of the script, Paulus said she “saw the appetite on the part of Griffin and Matt to make a piece of theater that speaks to our world in a very specific way, to our responsibilities and our global lives.”

The musical also matches Paulus’ vision for expanding the boundaries of theater and her drive to produce shows that “catalyze a community to talk, to debate, to dive into a discussion that we might not otherwise have.”

From the outset, Matthews and Gould, who spent two years in the Peace Corps in West Africa, envisioned a production that would jumpstart conversations about subjects like aid work, sexuality, inequality, and religion — all themes in the show. Each performance of “Witness Uganda” is followed by a “talk back” session with members of the cast. Even before the show began its A.R.T. run, the creative team was getting people talking. Last fall, the pair performed their two-man version of the show for several community and church groups and schools in the Boston area.

On a crisp November day, Matthews and Gould visited Cambridge Rindge and Latin School, where the students wanted to talk after the performance. “What happened to the head of the orphanage?” “What kinds of input did the kids give you for the show?” “What advice would you give students who want to become actors or actresses?” the teens wondered.

The question “Why did you write a musical instead of a play?” evoked a particularly passionate response.

“Witness Uganda,” with its complex subject matter, needed more than just words, explained Gould, the show’s composer, who also plays the keyboard during the production and directs its seven-member band. “It needed the language of the universe,” he said, “which to me is music.”

Gould and Matthews agreed that being an artist comes with a social responsibility.

“We became artists because we believe that there were important things to say and share with the world,” said Gould, “and we still believe that.”

“We believe that going to the theater has the potential to change the way people look at things, and change the way they see themselves and the people around them,” added Matthews.