When the walls come down 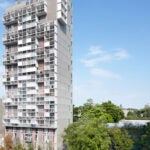 The idea for a wider conversation in the LGBTQ (lesbian, gay, bisexual, transexual, and queer) community first came up during an HBS student retreat last year, as many talked about wanting to build broader and stronger ties with other LGBTQ students in the area, but not having a vehicle to do so, said Ana Mendy, co-president of the LGBT Student Association at HBS and one of the conference organizers.

“We’re a small community and it seemed silly that we were isolated across the river without knowing who the other LGBTQ students were at Harvard. We all agreed that we should be coordinating and getting to know each other,” said Mendy ’09, M.B.A. ’14.

The notion of a conference “resonated” with people across the various Schools, she said, because “having a milestone or something we’re all working toward is a great way to accelerate that collaboration and relationship-building.”

“There aren’t many conferences across all the Harvard grad Schools. When I was an undergrad, I was part of the first Harvard Arab [Weekend], and so, from remembering what that looked like, and the power of bringing together all the Schools, that was kind of our vision,” said Mendy.

Between 350 and 400 students, faculty, and others from across the Harvard community, as well as counterparts from 30 other institutions — including the University of California, Berkeley; Yale Law School; and the London School of Business — are expected to attend the event, which will be held on the HLS and HBS campuses.

“In our community, there are so many issues because the LGBTQ moniker is just an umbrella,” said A.J. Lee, M.P.A. ’14, who along with Mendy and Ma’ayan Anafi, J.D. ’15, is helping lead the 30 event volunteers from across Harvard Medical School, HLS, HKS, and HBS.

“There are individual communities within there and each of those communities have their respective issues, too. So when you’re trying to bring in speakers to cover the gamut of those issues, it’s impossible,” said Lee.

High-profile figures from politics, business, law, the arts, and more will address specific LGBTQ challenges in their realms. Among them: Ken Mehlman, J.D. ’91, President George W. Bush’s 2004 campaign manager and a former chairman of the Republican National Committee; Brian Rolfes, a partner at McKinsey who leads the firm’s global recruiting; former hockey star Caitlin Cahow, ’08, who is now part of the U.S. delegation headed to the Olympics in Sochi; and Ash Beckham, an inspirational speaker whose “Coming Out of Your Closet” video became a YouTube sensation.

Other participants will give “mini TEDx”-style talks on issues such as employment discrimination, while a design innovation consulting firm will lead an ideation session in HBS’s popular new collaboration space (The Hives) to assist small cohort teams in brainstorming about issues such as youth homelessness, bullying, trans inclusivity, and health care.

“Part of the really great thing is that we’re bringing in people not just from different disciplines, but with really different perspectives, just all over the political map, and we’re really excited for the debate that’s going to happen,” said Anafi.

“There’s a lot of power to interdisciplinarity, so I think that’s what we’re trying to harness when we’re talking about attacking some issues,” said Lee.

Although the conference’s scope has already grown far beyond its organizers’ earliest expectations, whether it proves to be a success depends ultimately on what happens not this weekend, but afterward.

“We’re really hoping that — especially out of the ideation session — there’s something that comes out that’s going to be turned into action by the community,” said Anafi. “If we can see those ideas translating into something more beyond this conference, that would be amazing; if we can see an increased community or more cohesiveness, then that would be really amazing too.”

“Ideally, in five years or something, people will look at this conference and be like ‘This is the biggest conference for LGBTQ students in the U.S., in the world,’” said Mendy.