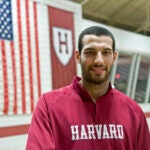 From varsity to intramurals, sports are a key part of University life

When Caitlin Cahow won an Olympic bronze medal in 2006 as a member of the U.S. women’s hockey team, she kept the celebration short. After all, she had to race back to her undergraduate anthropology studies at Harvard.

When people think Harvard, they usually think academic achievement. So at first glance, it might seem that Cahow ’08, who’s also on the U.S. team that will face China in Vancouver on Valentine’s Day, is an athletic anomaly. But that wouldn’t factor in alternate captains Angela Ruggiero ’04, who’s on her fourth Olympic squad, and Julie Chu ’07, who’s on her third. Nor would that account for the Canadian team’s Jennifer Botterill ’03 and Sarah Vaillancourt ’09.

In fact, more than 130 Harvard athletes have competed in the Olympics since they resumed in 1896 (including the first medal winner). Ten Crimson athletes and coaches competed in the 2008 Beijing summer games, six in the 2006 Turin winter games, and 13 in the 2004 Athens summer games. There will be five in Vancouver. There has never been an Olympics without at least one Harvard player or graduate involved.

“Harvard really became my home,” Cahow said, describing why she returned to campus during a short January training break rather than rest up. “This is my central hub. It’s a ‘pay it forward’ kind of a deal. You feel attached to these people for the rest of your life.”

Harvard offers 41 Division 1 sports, more than any other college in the nation. More than 1,000 undergraduates compete in the University’s robust intercollegiate program.

Harvard’s vast club sports program has more than 3,000 participants in 40 sports, with 1,100 young men and women competing in 31 House intramural and 16 freshman league sports and special events. In addition, 8,500 members of the Harvard community spend hundreds of thousands of hours each year at the University’s athletic facilities and in recreational classes.

The motto of Harvard’s vast sports programs, reflected in the wide participation they draw, is “athletics for all.”

For Harvard’s Bob Scalise, Nichols Family Director of Athletics, that motto is paramount. “Athletics for all means exactly that,” he said, “whether someone is an intercollegiate athlete and wants to compete at the highest level of their sport, a club athlete, or part of the intramural or recreational programs. It’s for everyone. We have a very broad-based mandate.”

While academics are undoubtedly the priority for students arriving at Harvard, the strong sports programs prove a bonus for many. The ability to compete at a high level while balancing course work has even meant a professional career for a few talented graduates.

Four former Harvard football players are now making their mark in the NFL. Matt Birk ’98 plays center for the Baltimore Ravens, Desmond Bryant ’09 is a defensive end for the Oakland Raiders, and Chris Pizzotti ’09 is the back-up quarterback for the Green Bay Packers. Last season’s starting quarterback for the Buffalo Bills was Harvard’s Ryan Fitzpatrick ’05. Other one-time Harvard stars have found success in the National Hockey League, including Don Sweeney ’88 and Ted Donato ’91, the Crimson men’s hockey coach. Forward Dominic Moore ’03 plays for the Florida Panthers, and current freshman Louis Leblanc opted to play for the Crimson instead of the Montreal Canadians. Tennis player James Blake ’91 has found success on the pro circuit.

Still, while Harvard’s strong program allows athletes to compete against some who are the best in their fields, preparing Harvard students for professional sports careers isn’t the primary goal of any Harvard coach. Across the board, they agree that their purpose is preparing undergraduates for life and the world beyond Harvard’s ivy-dappled walls.

“Sports reveal character, and that’s sometimes something you are unable to see in the classroom,” said Katey Stone, Harvard’s women’s hockey coach. “A life balance is the most important thing.”

After 16 years as Harvard’s head football coach, Tim Murphy has seen his share of titles and Harvard standouts. For Murphy, though, what sets a Harvard athlete apart is the University’s avoidance of scholarships.

“At Harvard you have no financial incentive to play. From that sense, athletics at Harvard are as pure here as at any school in the country. … Here, you play for the love of the game and your teammates.”

Emphasizing that goal, in his office overlooking Harvard Stadium, Scalise has hung a giant whiteboard. Written at the top in bold black letters are the words “Education Through Athletics,” the core component of Harvard’s athletic mission.

“We feel you can learn the lessons of athletics whether you are an aspiring Olympian, a team member, an intramural or club participant, or a recreational athlete. Those lessons include the importance of teamwork, leadership, resiliency, risk taking, the importance of maintaining a healthy lifestyle. These are all very valuable lessons for everyone to learn, that’s our philosophy.”

Star basketball player “Jeremy Lin is wonderful, and his story tells people that we can compete at the highest level, but that’s the tip of the iceberg of many, many thousands of stories of people whose lives we touch,” Scalise added. “They have their own success stories. They aren’t in Sports Illustrated. They are the kids who get involved and win an intramural championship and bond as a House together. That’s fabulous.”

As in academics, hard work is a key for athletes to thrive. For two hours each night on the third floor of the Malkin Athletic Center, young men and women wage fierce combat against each other. The noise level is jarring, a symphony of electronic beeps that signal hits, the sharp crack of steel on steel, and the slap of fast-moving feet against a narrow, metal strip.

But as soon as members of Harvard’s fencing program are done sparring, they put down their swords and head as a group to dinner at a nearby dining hall. Like all of Harvard’s athletic programs, camaraderie is a hallmark of the team. For the fencers, the bonds run deep. They travel and compete together, and they practice in tandem, coaching each other and offering advice and encouragement.

“The team is awesome,” said Noam Mills ’12, a top-ranked fencer who just returned from Qatar, where she was competing with the Israeli national team. “Aside from being good fencers and good athletes, they are also really amazing people,” Mills said, adding that being part of the team made her transition from Israel to Cambridge much easier.

“You just help each other get pumped up. … It’s the people who make it,” said freshman Felicia Sun, who is looking forward to fencing’s NCAA championships, which will be hosted by Harvard in March. “They are not just other fencers, they are my teammates, and they are my friends, and that’s what keeps me coming back.”

Head coach Peter Brand, who has run the program for 11 years and led his players to the NCAA championship in 2006, said coaching the team has been his “dream job.” But for Brand, no title can replace the bonds that the players form and the life experience they gain.

“I believe these relationships and bonds are possible because sport represents a universal language. In the fencing room, what we try to do is use this sport to bring people together, no matter what their origin, background, religious beliefs, or economic status. I also believe that when people participate in sport they can experience real exhilaration even as they learn the ideals of teamwork, a skill that will hopefully serve to the betterment of the Harvard community and society as a whole.”

Prior to heading for Vancouver, Cahow chatted with Stone, her former coach, at the Bright Hockey Center and prepared to take the ice to practice with her one-time team. While at Harvard, Cahow was part of a powerhouse squad that won two ECAC titles and made it each year to the NCAA tournament, twice reaching the final. She said she was “floored” when she first met Stone, and heard her message.

“I just was struck by how welcoming and honest she was. She said, ‘We recruit people more than we recruit players. We look for character, and we build character, and those are the most important things about this program. You are going to play great hockey, and you are going to make the best friends that you have ever had in your entire life, but our hope is that you come in a great person and you leave an even better person.’ ”

“I couldn’t believe it. It wasn’t about the power play, it wasn’t about the record or statistics, it was about ‘we want you to become the best possible person that you can be through being a part of this program,’ and I was sold.”

Men’s soccer is another strong Harvard program, and last fall the team advanced to the third round of the NCAA tournament before losing to Maryland. While star forward Andre Akpan garnered broad public attention, another talented player quietly came into his own. Both Akpan and central defender Kwaku Nyamekye ’10 were picked in the recent Major League Soccer draft. Akpan ’09 just reported to training camp with the Colorado Rapids. Nyamekye, who will graduate in the spring, will join the Columbus Crew in June.

During his winter break, Nyamekye, a tall player with a knack for moving forward and attacking with the ball, trained with Rangers Football Club, a team in the Scottish Premier League. A native of Switzerland, where he began playing soccer as a boy, Nyamekye admits that he chose Harvard for the academics and that a career in business is likely in his future.

But for now he is content to follow his dream of playing professional soccer for as long as he can. Aside from the Harvard soccer program giving him the opportunity to compete at the top of the collegiate game and win two Ivy League titles, Nyamekye said he will always remember the camaraderie he had.

“It really shows that, more than being just smart students, Harvard kids are really multifaceted,” said Nyamekye, “and it brings a lot of students with a lot of interest together. … It adds an interesting dynamic to the college experience and to college life.”

Competition comes in many forms at Harvard. Students in the intramural program appreciate that they can compete and put in as much time as their schedules allow.

“It’s a total break from whatever you are doing,” said Fabian Poliak ’11 of Leverett House, who plays on its B-squad volleyball team. “To me it’s a huge break from studying, great exercise, and a lot of fun.”

Harvard’s diverse club program also affords students the chance to compete in sports and movement, from badminton to ballroom dance.

For senior Khoa Tran, who took up martial arts as a boy to stay out of trouble and learn how to say no to peer pressure, the tae kwon do club team has proven invaluable.

“It’s a way of life, not just a sport,” said Tran, who became an instructor with the team and now is passing along his passion to the next collegiate generation.

Harvard long ago decided to keep its sports in context as a supportive part of College life. Still, teams that combine passion, talent, drive, and dedication can win championships too.

Although Harvard’s sports programs focus on the student athletes, they also have been involved in many sports firsts, including:

“The fact that people can come to Harvard and, whatever their talents, whatever their interests might be, they can pursue them to whatever level they want is a very important message,” said William R. Fitzsimmons ’67, Harvard’s dean of admissions and financial aid, who attributes his commitment to staying in shape to his early Harvard experience as a hockey goalie.

When he travels on recruiting visits, Fitzsimmons said he conveys that message to prospective Harvard students who regularly ask him about the College’s intercollegiate, club, intramural, and recreational community.

“I tell them,” he said, “that it is a very important piece of Harvard life.”

Gervis A. Menzies Jr. contributed to this report.