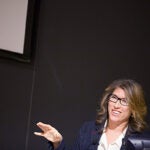 Akinori Abo, a master carpenter from Japan, picked up a thin-bladed crosscut saw and drew it quickly through a 6-inch block of wood. Each time he pulled the rattan-wrapped handle back, the blade hissed and aromatic sawdust streamed to the floor. Abo’s final cut drew a burst of wild applause.

It may seem odd to applaud a man for sawing wood, or demonstrating a carpenter’s square, or drawing a heavy plane across a wide board. But consider that Abo’s shavings were three times thinner than a human hair, curling up from the plane like a paper scroll. Or that the block of wood afterward was as smooth as ivory. The applause, from 50 onlookers at Harvard’s Center for Government and International Studies (CGIS), was an acknowledgement of awe for Abo’s craftsmanship.

His intimacy with his tools — each plane tuned like a piano, each saw blade lovingly sharpened — showed a mind in concert with muscles, a harmonious lineage of style that dates back more than 1,300 years.

The demonstration by Abo, who has been a master carpenter for 40 years, launched “The Thinking Hand,” an exhibit of the tools, traditions, techniques, and woods of traditional Japanese carpentry. (The exhibit is open through March 25 at the Japan Friends of Harvard Concourse in the CGIS Building at 1730 Cambridge St.)

Included are displays of tools used for primary shaping, fine shaping, and joinery. There is a display of the four woods most common in Japanese traditional building, along with boxes of shavings from each, which exhibit-goers are encouraged to smell. A daiku, or master carpenter, can identify each wood by its scent alone.

In the exhibit, there are two architectural scale models of the kind long used by daiku to project the complex geometry of projects that often use irregularly shaped native wood.

The exhibit also features a full-size sukiya teahouse that Abo built in Japan and then reassembled in Cambridge. The structure, which is modest and tiny and seemingly fragile, has the usual features intended to embody serenity, simplicity, and the spirit of wood that lives on after cutting: round pillars, tatami floors, and walls of lashed members ready for a stucco of earth.

“It’s a 3-D jigsaw puzzle, very precisely joined,” said Harvard anthropologist Theodore C. Bestor of the  structure, which is open for two shoeless visitors at a time. Bestor, an authority on Japan’s food and popular culture, is director of the Reischauer Institute of Japanese Studies, an exhibit co-sponsor that is celebrating its 40th anniversary this academic year. “The Thinking Hand,” he said, is the biggest anniversary event of this year.

Helping Abo saw, plane, measure, and mark during the Jan. 17 demonstration was his 28-year-old apprentice, Takumi Kato, a fifth-generation carpenter. Providing a running translation at the demonstration was Harrelson “Hap” Stanley of Pepperell, Mass., who studied carpentry during a dozen years in Japan.

Harvard’s Graduate School of Design (GSD), the other co-sponsor, plans a permanent display in Gund Hall for the traditional tools, which were donated by the Takenaka Corp. The axes, saws, chisels, gimlets, planes, hammers, and other implements of wood and hand-forged steel represent Japan’s golden age of tool-making during the Meiji period a century and more ago. By then, samurai were no longer allowed to carry swords in public, and so makers of the famous tempered blades sometimes turned to making fine tools.

Tadanori Sakamoto, chief researcher at the Takenaka Carpentry Tools Museum in Kobe, Japan, was on hand for the demonstration. He said “The Thinking Hand” was the first such show organized outside Japan, and the first outside the museum to include such a comprehensive array of tools.

The exhibit displays 62 tools. There are seven saws, some as flexible as flyswatters. There are 18 chisels, some as broad as a hand, and each named for a shape or task: pairing, trowel, dovetail, striking, butt, mortise, and more. The exhibit’s 14 planes, some as big as a cutting block, have names like smoothing, side-shaving, roughing, and concave. Then there are the marking tools, like those Abo demonstrated from his own kit: the square, the bamboo inking pen, the ink pot with its animal shape, and the spirit level. Other tools represent a history of carpenter’s tasks that are as old as the building process: gauges, sharpening stones, and double-headed hammers of steel and oak. Abo hefted two at once, like dumbbells.

“They’re trying to get these tools out of the warehouse and out into the world,” said exhibit co-curator Mark Mulligan of Takenaka and its museum. The GSD “is not exactly a museum,” he said, but the donated tools are very welcome, since they are artifacts “close enough to the things we teach.”

Mulligan and Lippit visited the museum in Kobe last year, where they tried their hand at pulling a variety of planes along wood. (In Japan, traditional carpenters pull their saws and planes; their American counterparts push.) That humbling experience, said Mulligan, explains “why neither of us is up there” among volunteers at the demonstration eager to plane wood, Japanese-style.

“The Thinking Hand” provides a fast and accessible way to travel into another culture, and a nearly vanished age of hand tools, intricate joinery, and sensuous wood smells, an environment in which carpenters start a job with a walk in the woods to identify the right trees to fell.

In a related event, the GSD and the Reischauer Institute will co-sponsor “The Way of the Carpenter: Tools and Japanese Architecture,” a Japan forum presentation by University of Tokyo scholar William H. Coaldrake, author of “The Way of the Carpenter” (1990). It’s from 4 to 5:30 p.m. on Feb. 7 at Tsai Auditorium S010, CGIS South Building, 1730 Cambridge St.