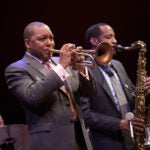 It’s both a dream and a nightmare scenario for anyone seeking a career on the musical stage: Stand alone in front of an acclaimed Broadway star, sing your heart out, and then await the critique.

That’s exactly what Harvard College students Joshuah Campbell ’16, Mark Heath ’14, and Amy Sparrow ’15 got the rare chance to do when Tony Award-winning vocalist and actor Brian Stokes Mitchell stopped by Agassiz House Thursday to lead a master class for singers as part of Wintersession 2014.

Stokes Mitchell is best known for his dramatic roles and leading-man turns in Broadway musicals such as “Ragtime,” “Kiss Me Kate,” and “Man of La Mancha.” An accomplished film and television actor, he is also a noted recording artist and concert recitalist who has performed with the nation’s top orchestras at Carnegie Hall, Lincoln Center, the Kennedy Center, and the White House.

Although gifted with a lush baritone that can move deftly between the Great American Songbook and show tunes, Stokes Mitchell, who was on campus for a concert at Sanders Theatre that evening, offered students his insights on vocal interpretation, not technique.

“I try to understand the song from the writer’s point of view,” Mitchell said of his approach, adding that he finds it easier to interpret a song if he gets inside the construction and ideas behind a piece before playing creatively with it.

To illustrate how singers can put their own imprint on even the most shopworn numbers with some smart preparation, Stokes Mitchell performed “The Impossible Dream” from “Man of La Mancha.”

Along with his accompanist, Tedd Firth, Stokes Mitchell sang the showstopper in the familiar, heroic style of Richard Kiley’s original 1965 recording, and riffed on the Stephen Sondheim torch song “Losing My Mind” from “Follies.”

Then, deconstructing the lyrics line by line, he analyzed the words and ideas, as well as the musical prosody — the way a song’s syllables and melody inform and support each other to tell a story — and toyed with different phrasings and transitions to show how the song’s emotional power is directly influenced by a singer’s musical and expressive choices.

“When you personalize songs, the better your performance is going to be and the more individual your performance is going to be,” he said. “Because nobody’s ever seen your version of it, and nobody knows what you’ve been through in your life, and nobody’s heard your phrasing of it and the way your experience affects your phrasing and the way you choose your notes. Make it as personal as you can, and that will guide you.”

Bringing one’s own history and feelings to a work helps unite the singer to the song, which, in turn, brings it alive for an audience, he told students.

“If you find in your life really specific things about every single line, people in the audience aren’t going to know exactly who you’re talking about or what you’re talking about, but what they’re going to feel is the experience that came from you, and that’s what makes them” identify and feel the song, he said. “That’s how you connect with an audience.”

Stokes Mitchell’s visit was part of an ongoing effort to bring more celebrated working artists to Harvard to help guide young performers, said Thomas Lee, executive director of Learning From Performers, the program that runs the master classes under the umbrella of the Office for the Arts at Harvard. Past master talents have included lyric soprano Renée Fleming and stage actress and singer Christine Ebersole.

“It’s just absolutely so necessary for students who are interested in singing and acting to work with people who are really doing it, with professionals,” Lee said just before the class. “The students who are performing … they all work with vocal teachers, and they’ve done productions here at Harvard. But to get the chance to meet and work with a professional who’s been doing it for so long is just invaluable.”

Lee said because students at the College don’t concentrate on the performing arts, the Learning From Performers program “tries to fill that gap.”

“It’s just a wonderful experience … there’s just a real spark of learning. They just gain so much,” he said.

Stokes Mitchell and Firth provided the student singers, who were accompanied on piano by Dylan Marcaurele ’16 and Jessica Rucinski ’13, with spot-on feedback and coaching about their individual performances. They also offered some keen advice about the importance of body language and the need to research different arrangements and recordings to understand how a song has evolved over the years before putting their own spin on it. Like any discipline worth studying, it’s a process that never ends, Stokes Mitchell said.

“The cool thing about being an artist of any type is that it’s a constant exploration,” he said. “You’re trying to reach this thing that’s impossible to reach, this perfection, this full understanding of something that you’re doing. And the more you study it and get into it … the more you start seeing more spaces, and you start seeing more depth in it, and you realize more places you can go.”