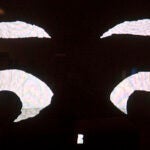 One of opera’s brightest stars shone her light on a few Harvard student singers and a group of fans at Paine Hall on Tuesday (Feb. 9).

Renowned soprano Renée Fleming gave an informative and entertaining master class for four Harvard undergraduates who performed Italian, American, and French arias for the down-to-earth diva. Displaying her humor and charm, Fleming offered the young performers equal amounts of praise and practical advice on developing their vocal range and technique.

“We are going to have a fun time together,” Fleming told the singers, their undergraduate accompanists, and a standing-room-only crowd, in an event sponsored by the Office for the Arts at Harvard’s Learning From Performers program and the Harvard University Department of Music.

She didn’t disappoint, revealing her good nature and engaging style with amusing anecdotes about everything from a jaw condition that once forced her to sing a performance with her mouth almost shut, to opera’s notoriously tragic repertoire.

“I made the mistake of singing one happy-ending piece at the Met, and I got complaints,” she recalled with a laugh. “They were so disappointed that it ended well.”

Fleming challenged Sofia Selowsky ’12, a mezzo-soprano with a deep register, to explore her voice’s higher range while working on “Cruda Sorte,” from “L’Italiana in Algeri” by Gioachino Rossini. Hesitant, Selowsky obliged, ending her session on a high note that drew loud applause.

“That was really lovely,” chimed Fleming, adding, “You’ve got this.”

“Obviously, no one told you this is hard,” Fleming remarked to Bridget Haile ’11 after her performance of “The Trees on the Mountain” from the opera “Susannah” by American composer Carlisle Floyd. The soprano complimented Haile on her poise and comfort with the song, and encouraged her to work on her interpretation of the piece, and to feel the “passion, anger, and despair” of the character.

Working largely on breath support and technique, Fleming took each of the singers through a variety of exercises, occasionally coaxing them into comical positions that yielded solid results. She made Haile hold her own nose to help her to reach a high note, and she placed Michael Cherella ’11 up against the wall to help him to align his body, keep his head up, and develop resonance while singing “En Fermant les Yeux,” from the opera “Manon” by Jules Massenet.

Later, she encouraged the singers, on their own time, to try singing while lying down.

Fleming even involved audience members, making them inhale during one exercise and then release their breath in one long, sustained hiss, briefly transforming the space into a giant snake pit.

Music was in the genes of the Pennsylvania native who grew up in Rochester, N.Y., surrounded by singing. The daughter of two voice teachers, Fleming considered a career in music teaching as well while at the State University of New York, Potsdam, before going on to study at Rochester’s Eastman School of Music and Juilliard’s American Opera Center in the 1980s, launching her professional career.

Known as the “the people’s diva” for her charisma and easygoing persona, Fleming debuted at the Metropolitan Opera in 1991 as the Countess Almaviva in Wolfgang Amadeus Mozart’s “The Marriage of Figaro,” a part considered today by many to be her signature role. A multiple Grammy winner, she has performed at famed opera houses worldwide and is known for both her vocal lyricism and dramatic flair.

She also regularly hosts the Metropolitan Opera’s “Live in HD” broadcasts, taking viewers on intimate, behind-the-scenes tours of productions and introducing the stars of the shows while they take a break between acts.

Fleming’s voice, a full, lyric soprano with a range of rich sound, delighted the crowd as she worked with the aspiring singers. There was a collective gasp from the audience each time she opened her mouth to sing the pitch she was looking for or the phrasing of a particular line.

In his 2006 memoir, Joseph Volpe, former general manager of the Metropolitan Opera, wrote that listening to Fleming was like “watching a bird in flight.”

“I’ve watched the most brilliant American singing career of my time grow opera by opera,” penned Volpe, who led the company from 1990 to 2006.

The soprano’s visit was part of Harvard’s Learning From Performers series. The annual program, created in 1975 by the Office for the Arts, hosts 15 to 20 artists involved in music, dance, theater, film, television, visual arts, and interdisciplinary arts. The visiting artists interact with undergraduates through lectures, seminars, master classes, workshops, and residencies.

The event attracted a diverse audience: music students and musicians, admirers and fans old and young who packed the theater. Even a collection of visual artists — a three-dimensional design class from the Massachusetts College of Art — was on hand. Their teacher, Taylor Davis, a former visiting faculty member at Harvard’s Carpenter Center for the Visual Arts, brought her freshman students to the class to help them “see detail with more clarity.”

Fleming stayed well past the two-hour mark to make sure she answered all questions from the audience.

Before the class began, Fred VanNess, a graduate student and a tenor studying opera at the nearby Longy School of Music, eagerly awaited the singer he called “breathtaking.”

“This is a fantastic opportunity to learn from one of the greats.”

Selowsky beamed her way off the stage after her final note.

“I am glad she pushed me to do that, because I realized sometimes you just have to let it go to see what your voice can do.”

Her accompanist, Matthew Aucoin ’12, said working with such an established talent was a “gigantic thrill.”

“She is really sort of the dream person to be giving this master class because she has been able to blend real artistic integrity with an extraordinary kind of appeal,” said Aucoin. “That is something that young musicians strive to maintain. She’s an idol of many of us.”