Protectors of the Maya 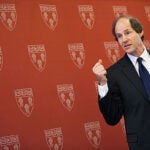 This is the 11th in a series of stories about Harvard’s engagement in Latin America.

COPÁN, Honduras — On a steamy afternoon in late August, a blue helicopter flashed over Copán, Honduras, carrying the country’s vice president to the official opening of an archaeological site, the product of a collaborative effort to protect the area’s treasured Maya heritage.

The site, Rastrojón, sits atop a hill at the eastern edge of the Copán valley and affords visitors a spectacular view. Considered both a sacred place and a strategic outpost, the area is covered with fragments of stone and the remnants of buildings that once housed Maya nobility and the elite guard who protected them.

When Honduran Vice President María Antonieta Guillén de Bográn arrived at the rocky outcrop after her flight and a short ride up a bumpy, dusty path off of Copán’s main road, Harvard’s Bill and Barbara Fash, fixtures in the area for more than three decades, welcomed her with warm smiles.

Since 1977 the husband-and-wife archaeologists have been an integral part of the local landscape, working closely with community residents and Harvard students to decipher and decode the mysteries of the Mesoamerican civilization and preserve the rich ruins for future generations.

But when the Fashes noticed several years ago that much of their top trained talent was leaving the area, migrating into other types of work, they established Proyecto Arqueológico Rastrojón Copán (PARACOPÁN), a training program that teaches local young people to become to guardians of the past.

“We wanted to have a group of people who would be able to see the entire process, from formulating the research and conservation design, through the initial mapping of the site, to the recovery of the sculptures that were still visible on the surface, and then into the actual excavation and conservation,” said Bill Fash, the Charles P. Bowditch Professor of Central American and Mexican Archaeology and Ethnology in Harvard’s Department of Anthropology.

Rastrojón became the perfect test locale for the new program. For the past seven years, the site’s secrets — ­like the intricate feline sculptures that are key to its evocative name, “Precious Puma Hill” — have been carefully uncovered, documented, and preserved by the Fashes, Co-Director Jorge Ramos, and the newly trained team of experts.

“We realized there was need for a new generation of young people who would be able to carry forward the work that archaeologists and conservation specialists and architects and other kinds of scholars have learned over the past 30 years of really intensive work in Copán,” said Bill Fash.

In addition to Guillén de Bográn, the guest list for the site’s opening day included U.S. Ambassador Lisa Kubiske. Both officials praised the collaborative nature of the work.

“Sustainability is very important for this type of project,” said the vice president. “It needs to involve and include the local community.”

Kubiske said the project is both a vital training opportunity and a way to augment U.S.-Honduran relations.

“The Fashes have worked so hard to try to train students at Harvard in field archaeology, but also to train locals to be able to be the leaders of this project in the future,” she said. “Honduras needs people like that. … It’s really important.

“This is a very positive project. It almost lends a human face to relations between our two countries,” added Kubiske. “It’s not government-to-government, it’s nongovernment-to-nongovernment. For the United States, that’s very important.”