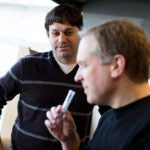 Could be what makes subcutaneous obesity relatively healthy

“Beige fat” cells found in healthy subcutaneous fat in mice play a critical role in protecting the body from the disease risks of obesity, report researchers at Dana-Farber Cancer Institute, who say their study findings may have implications for therapy of obesity-related illness in humans.

A report in the journal Cell suggests that the presence of beige fat, a type of fat cell that can burn energy to release heat, is what makes subcutaneous obesity relatively healthy compared with visceral fat inside the abdomen, which largely lacks beige fat cells and is associated with increased risks of diabetes, heart disease, and death.

Excess calories in overweight people are stored in fatty tissues mainly composed of white fat cells. Beige fat is present in scattered deposits in adult humans, mixed in with white fat. Beige cells can activate a “thermogenic” mechanism that burns stored fat to make heat. When this occurs within white fat, the process is called “browning.”

“The findings indicate that PRDM16 and beige adipocytes [fat cells] are required for the ‘browning’ of white fat and the healthful effects of subcutaneous adipose tissue,” noted the authors. In the future, the discovery “might lead to pharmacologic strategies to treat obesity-related diseases,” said Cohen, the study’s first author and an instructor of medicine at Harvard Medical School (HMS). “The goal would be to create healthier fat” — possibly by manipulating PRDM16 in the body, he said.

Spiegelman’s research group has been at the forefront of discoveries in the past 20 years about how different types of fat cells emit chemical signals that influence body metabolism, in some instances promoting health and in others disrupting metabolism, leading to diseases such as diabetes, hypertension, fatty liver, and heart disease. “Fat cells are the central signaling system to measure how much energy is in your body and what the body needs to do about it,” explained Spiegelman, the Stanley J. Korsmeyer Professor of Cell Biology and Medicine at HMS.

Cohen, a cardiologist and postdoctoral fellow in the Spiegelman lab, was interested in the function of beige fat in a physiological context as well as the well-known observation that overweight people whose extra pounds are deposited mainly as visceral fat inside the abdomen and around the liver and other organs have increased risks of high blood pressure, diabetes, and heart disease. People who carry extra weight subcutaneously under the skin of the hips and thighs (a pear-shaped pattern) are largely spared these added risks.

Spiegelman and others have proposed that increasing the amount or the activity of beige fat in people might be useful in treating diseases related to being overweight and obese. Skeptics have argued that beige fat is of minor importance in the overall metabolism of the body.

“Identification of pharmacological activators of PRDM16 targeted to beige adipocytes could hold promise as a new class of therapeutics,” they suggested.

Support for the research was provided by National Institutes of Health grants.