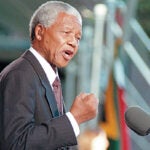 The world’s biggest lottery took place on Friday, but nobody won a giant check. Instead, the 32 national soccer teams that qualified for the 2014 World Cup in Brazil next summer were divided into eight groups of four for the first round during a glitzy, televised ceremony in a Brazilian coastal town.

To the dismay of American soccer fans, the U.S. team landed in the “group of death,” which most experts agree contains the toughest opponents in the preliminary round. The United States will face soccer juggernauts Germany and Portugal as well as a strong team from Ghana.

In the run-up to the event, which will be held June 12 through July 13 at various locations in Brazil, the organizers have faced construction delays, violent protests, and, most recently, the collapse of a massive crane that destroyed part of a stadium in São Paulo.

Judith Grant Long is associate professor of urban planning at Harvard’s Graduate School of Design. Her current book project, “Olympic Urbanism: From Rome to Rio,” analyzes the oft-heard argument that the Olympics are a catalyst for urban redevelopment. For the project, she conducted archival and field research in 15 host cities, from Rome in 1960 to Rio de Janeiro in 2016.

Long spoke with Gazette reporter Colleen Walsh about the impact that hosting such a large-scale international event can have, the benefits it leaves behind, and the social issues that can accompany it:

GAZETTE: How do you think protests might affect the event this summer?

LONG: Given the recent protests around the Confederations Cup in June, this is a critical issue facing World Cup organizers in Brazil. It is interesting to witness how protests against mega-events appear to be gaining traction in Brazil more than they have recently in other countries that have hosted either the Olympic Games or the World Cup. I suspect this will turn out to be an important moment in the history of global mega-events, because two trends are intersecting in Brazil: On the one hand, there is the increasing cost and scale of these mega-events, which raises red flags among prospective hosts. On the other hand, there is an emerging middle class in Brazil with increasing economic and political mobility, and a keen interest in social equity issues. Taken together, these trends may lay the groundwork for a degree of social protest against mega-events that has not been seen before.

GAZETTE: How do you think the country will react if Brazil gets knocked out of the tournament in an early round?

LONG: That’s an important issue. For those visiting from outside of Brazil, the success of the event is largely colored by the carnival atmosphere, and the success of their favorite team. For Brazilians, the progress of their team through the tournament will be very important in determining how they view the cost of the event. If Brazil wins the World Cup, then the sting of the billions of dollars spent will be far less felt. If Brazil is eliminated in the early rounds, one might expect a very different opinion about public spending on the stadiums. Their success in the tournament will also affect the level of social protest, I expect, in that there will be less broad public support for protests that interrupt the event in any way if the Brazilian team is winning.

GAZETTE: What are the types of specific benefits associated with hosting such a large-scale sporting event in a country like Brazil?

LONG: There are three main benefit categories. First, there are economic benefits, which include the creation of new jobs and taxes, as well as foreign trade and branding strategies. Second, there are urban redevelopment benefits that organizers hope will arise in the form of new private investment in the areas surrounding each stadium. Third, there are what academics like to call “psycho-social” benefits, which I call the “feel good” effects. Brazilians are proud to be hosting the World Cup, which is a source of civic pride. Brazil is featured on the world stage for the duration of the event, which contributes to the city’s image, particularly if the tournament is run successfully. Finally, since soccer is Brazil’s national sport, the provision of new stadiums across the country is intended to increase access to the sport, at both amateur and elite levels, which in turn seeks to deliver local social and health benefits.

GAZETTE: Some reports estimate the cost of this World Cup at more than $3 billion. Do the costs of preparing to host such big sporting events outweigh the events’ economic and social rewards?

LONG: Any analysis that looks solely at economic benefits, relative to the price tag of these mega-events, is unlikely to show that the benefits exceed the costs. For this reason, mega-events are typically positioned in a way that talks about other kinds of benefits, be they urban redevelopment, which includes the stadiums and the infrastructure, as well as the branding, civic pride, city image, and other kinds of intangible benefits. For example, my research tracks how there are political advantages to packaging mega-events within larger city building projects because urban redevelopment benefits take a long time to materialize, and are hard to track. As a result, many politicians who approve mega-event construction projects based on a larger urban redevelopment scheme can be relatively confident that they will not be in office at the time that the urban outcomes can be measured in a meaningful way. So overall — given that the economic benefits rarely pencil out — the fact that cities and countries continue to show interest in hosting mega-events suggests that these other kinds of benefits and political rationales are really the key motivations. These are the topics that researchers need to study to better guide prospective hosts as they plan for and deliver mega-events.

LONG: Brazil is a wonderful country with a long and colorful history of just-in-time-delivery in its large-scale construction efforts. It is not unanticipated or surprising to anyone who follows these projects to find that Brazil is a little late in meeting construction deadlines at this point in the cycle. In fact, one need only go back as far as the 2007 Pan Am Games in Brazil to see a similar flurry of last-minute concerns, and modifications to construction projects as a result. Not that Brazil is the only country to reveal these kinds of delays, of course. My bet is that in the best Brazilian tradition, the necessary infrastructures will be sufficiently complete and the stadiums ready for play by the time the World Cup opens next June.