We can work it out 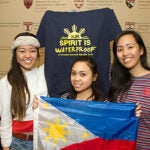 ‘Our spirit is waterproof’

With political gridlock and partisan brinksmanship in the U.S. Congress at an all-time high, when the sight of opposing party leaders huddling to hammer out a budget deal is news, political scientists recently looked at the history and causes of disagreement in American politics. Now, they’re bringing their insights to bear on what most of the public agrees has become an intractable situation.

The key to getting beyond polarization and legislative stagnation, they say, is to find a way to the bargaining table and a way to negotiate.

In a comprehensive report published this week by the American Political Science Association, a task force of scholars from across the field considered the “institutional disincentives for cooperation and rewards for conflict” as well as “negotiation myopia” — the cognitive, emotional, and strategic errors people make that thwart agreements and mutual gains, and frequently foster legislative inertia. They also offered some best practices for pursuing substantive action through “deliberative negotiation.”

“We’re coming out with this analysis at a time when you might think it’s least useful because there’s the least chance for people to negotiate,” said Jane Mansbridge, Adams Professor of Political Leadership and Democratic Values at Harvard Kennedy School, and the current association president.

Both the U.S. House and the Senate are now more ideologically polarized and rife with party conflict than they have been since 1906, according to the report. Yet given the current climate, Mansbridge said, now may actually be an ideal time to offer guidance on reaching agreements.

“In this moment of crisis, we thought it would be helpful to bring forward what political science knew about negotiation and put it before the American public and members of Congress” and to make clear “how important negotiation is for democracy,” said Mansbridge in an interview.

“But to do that, we actually had to collect what political science did know, and that meant, in many cases, writing for the first time” an analysis of negotiation in Congress using the categories and findings that negotiation scholars have developed over the years, said Mansbridge, who co-edited the 182-page report with Cathie Jo Martin, a professor of political science at Boston University.

Mansbridge explained why there has been surprisingly little work on negotiation until now in political science. “There’s no quantitative record of what goes on in negotiations, so you have to use retrospective analyses and things that political scientists are a bit less comfortable with,” she said. “But its being hard to study doesn’t mean it shouldn’t be studied.”

Mansbridge said the goal of the report is to educate both members of Congress and the public “about the idea that Congress must negotiate, that this is a very important part of its role and that [negotiation] isn’t just a matter of giving things up, it’s also a matter of exercising creative intelligence, thinking hard about the problems of the country, and coming up with creative deals.”

“If we could recognize that this period of high polarization comes from structural factors — such as the signing of the 1964 Civil Rights Act and the subsequent realignment of the parties, the electoral closeness of the parties in the last 30 years, and the constitutional separation of powers — and accept that these structural factors are unlikely to change and therefore this is not a temporary crisis, then we would see that this is something we need to face as a polity,” she said.

Structurally, our system of government, with its sharp separation of powers and safeguards against majoritarian rule, makes virtually everything difficult, if not impossible, to accomplish without some sort of negotiation. But if American politicians adopted some key “rules of collective political engagement,” as is done in some European democracies, there would be a greater chance of breaking stalemates and making win-win deals, the report suggests.

Those “rules” recommend that negotiating parties:

“The impacts of rules of collective engagement embedded in governing institutions have effects not only on negotiation myopia,” the biases that negotiators bring with them to the table, “they also have significant effects on strategic calculations of interests, possibilities for coalition building, and patterns of democratic struggle,” the report found.

Simply allowing Congress to continue down a do-nothing path has costly and unseen implications for the nation.

“We’re particularly damaged when we’re in a situation of drift. By drift, I mean there are forces outside of the political process that are going in some direction already, on their own steam,” said Mansbridge. “When that’s happening and you don’t act, you allow that drift to continue. In a standard model, not acting leaves you at the status quo. … If the status quo is tolerable, it’s relatively fine to not act. But if you have drift, then it’s very, very problematic,” which is where the government is now, although there has been some progress on budget negotiations.

To get anywhere requires what some hardliners say they refuse to do: compromise.

“I would be very happy if, recognizing that, people readdressed the importance of negotiation and recognized that our representatives should be negotiating. They should not only be compromising, they should also be thinking inventively about ways of coming up with solutions that work as deals. Of course they should deliberate on the common good and they should also work on trades that can be made — actual negotiations,” said Mansbridge.

“We as a public should come to understand that [compromise is] not dirty, that it is not bad, that it is instead what we want people to do. It’s creative, it’s good, and it’s appropriate to politics.”