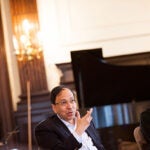 Harvard had a role in several timeless holiday carols

On Christmas Day in 1863, poet and Harvard professor Henry Wadsworth Longfellow wrote the words for “Christmas Bells.” The poem reflected the despair he felt at the grinding Civil War, but by the work’s end it hoped for “peace on earth” and “good-will to men.”

By 1872 the poem had been set to music and became one of the holiday season’s most enduring carols, “I Heard the Bells on Christmas Day.” It has been a standard since then — “wild and sweet / The words repeat” — sung by an eclectic mix of artists, from Elvis Presley and Johnny Cash to Bing Crosby and Pedro the Lion. The carol is one example of the hand of Harvard personalities in many holiday standards.

For instance, in 1849 Edmund Hamilton Sears, an 1837 graduate of Harvard Divinity School, wrote the lyrics to “It Came Upon the Midnight Clear.” In 1855, Unitarian minister John Sullivan Dwight, Harvard Class of 1832 and an 1836 Divinity graduate, wrote the English translation of the haunting classic “O Holy Night.” In 1868, Phillips Brooks, Class of 1855, who has since lent his name to Harvard’s chief society for good works, wrote the words to “O Little Town of Bethlehem.”

On the lighter side, in 1948 onetime leader of the Harvard University Band Leroy Anderson ’29 finished composing “Sleigh Ride,” a sprightly orchestral favorite.

Another light-hearted holiday classic has a more tenuous connection to Harvard. “Jingle Bells” was written and composed by James Lord Pierpont, a native of Medford in suburban Boston and the son of Harvard Divinity School graduate John Pierpont.

The elder Pierpont was an energetic abolitionist before the Civil War, and during the war itself, at age 77, became the oldest serving military chaplain. (His son, who had settled in Savannah, Ga., fought for the Confederacy and composed three popular Rebel songs, including “Our Battle Flag.”)

In 1857, “Jingle Bells” was titled “The One Horse Open Sleigh.” Legend holds that it was inspired by a boyhood sleigh ride in New Hampshire, which Pierpont told his mother about in a letter from boarding school in 1832. Legend also holds that it was written in Medford, where sleigh races were an antebellum holiday tradition. But it is more likely that this song — so nostalgic about snow — was written in sultry Savannah.

The same irony of weather was at play with Anderson’s “Sleigh Ride,” for which he gained inspiration during a July heat wave in 1946. The composition was completed the following February, and by 1949 this light orchestral celebration of the season was recorded by the Boston Pops Orchestra. The prominence of bells in the song hinted at Anderson’s later compositional experiments with novelty sounds, including typewriters and sandpaper.

“They are great tunes,” said Harvard choirmaster Edward E. Jones of “Jingle Bells” and “Sleigh Ride,” which “have become staples of the whole season.” (“Jingle Bells” has an added distinction: Nine days before Christmas in 1965, it became the first song performed in space. Astronauts Wally Schirra and Tom Stafford had smuggled aboard a set of bells and a harmonica.)

Jones is the Gund University Organist and Choirmaster in the Memorial Church. His Harvard University Choir just performed its 104th Annual Christmas Carols Service, an event billed as the oldest American carol service, on Sunday and Monday.

The other four works that have a Harvard connection “tie into a sense of nostalgia and remembrance of childhood that is such an important part of the Christmas season,” said Jones. “Whether real or imagined, the idea of a calm, silent, snow-dusted Christmas Eve is a very powerful memory.” All four, he added, “cross the secular-sacred divide.”

The durability of Christmas memories, traditions, and nostalgia “explains why carols with explicitly religious texts have life in a secular context,” said Carson Pierce Cooman ’04, composer in residence at Harvard’s Memorial Church. “What matters … has long transcended any meaning of the words.”

Arguably, there was no secular-sacred divide in 1849, when Sears wrote a poem for a December issue of the Christian Register in Boston. It became the carol we know as “It Came Upon the Midnight Clear.” A melody was added in 1850.

Like Longfellow writing on Christmas day in 1863, Sears, a pastor in Wayland, Mass., composed his poem with an underlay of melancholy. His skies were “cloven” and the “weary world” of the poem included “sad and lowly plains.” But in most modern versions of the carol, the melancholy is omitted. Certainly, too, we seldom hear Longfellow’s explicit reference to the Civil War, when “from each black, accursed mouth / The cannon thundered in the South.” (He wrote the poem while his teenage son Charles was home recovering from battle wounds.)

“Melancholy” is not the right word for the affecting English version of “O Holy Night,” whose lyrics are based on the 1855 Dwight translation of an 1847 French carol. The tone is redemptive. “A thrill of hope,” one line goes, “the weary world rejoices.” As with all these classics, generations of artists have recorded interpretations, including a 1916 Enrico Caruso version still in circulation. “O Holy Night” has the distinction of being the second piece of music and the first carol to be broadcast on the radio, on Christmas Eve, 1906.

When Brooks wrote the words to “O Little Town of Bethlehem” as a Sunday school carol in 1868, the religious-secular divide could not have been more absent. Brooks, who was then an Episcopal priest in Philadelphia, was inspired by an 1865 visit to Bethlehem. He reimagined the experience in the now-famous carol, a tossed-off number printed for Sunday school services:

O little town of Bethlehem,
How still we see thee lie.
Above thy deep and dreamless sleep
The silent stars go by. …

His church organist, Lewis H. Redner, had written the music barely hours before, in the middle of the night, after being awakened by “an angel-strain whispering in my ear,” he said in an interview decades later.

Redner added a note of surprise, one that any of the Harvard lyricists and composers might have seconded. “Neither Mr. Brooks nor I,” he said, “ever thought the carol or the music to it would live beyond that Christmas of 1868.”