‘Our spirit is waterproof’ 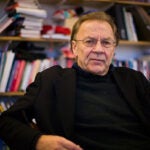 For Michelle Ferreol, the devastating effects of Typhoon Haiyan struck too close to home. A resident of Manila, the capital of the Philippines, Ferreol ’15 said she is thankful that her parents, siblings, and friends were relatively untouched by the massive storm. But she and fellow members of the Harvard Philippine Forum know that too many of their countrymen were not so lucky, and they are working to make sure their struggle is not forgotten.

“Being so far away, I feel that the distance makes it really difficult to fully comprehend what has happened and what is going on in terms of relief efforts,” said Ferreol, the forum co-president. “And because of the distance, I just feel somewhat helpless. But worse than the distance is the fact that the media is not talking about what is going on there as much, and it’s really not on people’s minds here.”

In an effort to continue raising awareness and funds, the forum, with support from the Harvard University Asia Center, is now selling T-shirts that can be purchased online and delivered in the Boston area or shipped across the country. The shirts, which sell for $15, incorporate the sun from the Filipino flag along with the slogan, “Our Spirit is Waterproof.” All of the proceeds from the T-shirt sales will go to UNICEF.

“We think it’s a slogan that captures the cheerfulness and optimism of the Filipino people,” said Michael George ’14, a member of the forum. “And the design plays off the Filipino flag, but it also symbolizes that there is light at the end of the tunnel.”

It’s been more than a month since Haiyan tore through the Philippines, killing more than 6,000 people and displacing 4 million. Relief work continues nonstop in the worst-hit areas as the country begins the slow, long process of rebuilding in the super-typhoon’s aftermath. Both Ferreol and George believe public attention has turned to other matters, such as the holidays, and support here in the United States is not as strong as it was in the immediate aftermath of the storm.

Ferreol and other College students rallied students in the immediate aftermath of the typhoon by organizing a benefit concert in the Quincy House dining hall. More than 20 acts from across Harvard and the greater Boston area came together for the event. The concert, subsequent donations, and a $5,000 pledge by the Harvard Foundation for Intercultural and Race Relations have so far generated $12,000 for relief efforts.

“There is always a big outpouring of support from the Harvard community when something like this happens, but then attention quickly goes away,” said George. “Our goal is to keep this fresh in people’s minds.”

George and Ferreol said they are used to typhoons, but nothing of this size and magnitude.

“The Philippines gets a lot of typhoons. I’d say we get about 15 a year,” George said. “Instead of snow days (off from school), we would get typhoon days. But this typhoon is the deadliest the country has ever faced.”

When exams are over, Ferreol said she will travel home to Manila and continue her work to bring relief to those hardest hit.

“A lot of the relief is being organized in and coming from the capital, so that is where I will be over break, helping with relief efforts. I know that my high school is collecting canned goods, putting together relief packages, and I will be there helping out with that,” she said. “We really wanted to launch the sale of the T-shirt before break, to keep this going. We knew from the beginning it would be a struggle to make sure the community does remember, but we’re not going to let them forget.”