How to speak American 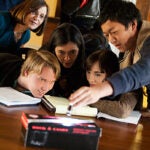 Guide traces how one language is refracted through many regional tongues

Don’t let that slick salesman honeyfuggle you: A fancy bombazine will never hold up in this toad-strangler.

Well, it’s certainly English, but few people these days refer to deceitful flattery as honeyfuggle. And unless you’re from Baltimore, you might not know that a bombazine is an umbrella, and only those from the Gulf region would call a sudden, heavy rainstorm a toad-strangler.

Just as in England the mother tongue sometimes bears little resemblance to what is spoken in the United States, the provincial vocabularies and dialects of America’s small towns and big cities can sometimes sound like foreign languages to the uninitiated.

Cataloging, decoding, and preserving the colorful idioms and terms used by regular folks before they’re lost to history, the Dictionary of American Regional English (DARE) is an acclaimed scholarly text widely referenced by everyone from teachers and librarians to forensic linguists and oral historians.

DARE, a project that took nearly 50 years to complete, includes 60,000 entries with not only the expected definitions and parts of speech, but alternate spellings and pronunciations, etymology, geographical origins, as well as synonyms from other areas of the country, quotations to illuminate word usage, and related bibliographies. Maps plot where a word is most often used, based upon the dictionary’s original field research.

DARE tape, 1965–70. Quotations from informants as recorded by DARE fieldworkers. Click “View track” above to see a written definition of each word.

This week, Harvard University Press (HUP), which publishes DARE, debuts a digital version of the six-volume dictionary, delivering the quirky treasures of our plainspoken language to the laptops of researchers and word nerds everywhere.

In addition to an array of advanced searches of the complete text entries, the online DARE offers 4,000 audio clips of words as spoken by those who used them, as well as detailed survey data, mapping functions, and broad demographic information compiled by dictionary researchers. Non-subscribers can sample 100 full entries, including maps and the relevant audio clips.

In many ways, the dictionary challenges the conventional wisdom that the gumbo of American English has lost much of its local tang.

“It’s a popular notion that American English has become ‘homogenized’ by the mobility of our population and the pervasiveness of national media, so I can understand why people like to believe it,” DARE’s editor in chief, Joan H. Hall, said in an email. “My view is that while language is always in the process of change, it doesn’t change in the same ways or at the same rate in all places. So yes, some local or regional terms may be displaced by terms that take hold nationwide, particularly through advertising, but thousands of others will continue to thrive in their localities, and new regional terms will appear as they fill particular niches.”

Hall believes the dictionary helps to legitimize regional terms by putting them in front of a national audience.

“DARE makes it clear that American English, while generally shared across the country, still has delightfully different flavors in different places, the result of differences in original settlement histories, later immigration patterns, economic and social differences, urban and rural character, etc. Their inclusion in a work like DARE can instill pride in the people who use them, knowing that they are reflections of our cultural history rather than indicators of backwardness or being out of step,” she said.

Assembling an authoritative dictionary of everyday vernacular was no easy task, and the idea dates back more than a century. In the late 1880s, the American Dialect Society sought to create a comprehensive compilation of dialects spoken across the United States, just as linguist Joseph Wright was developing the now-definitive English Dialect Dictionary in England.

But gathering information in a country vastly larger than England proved formidable, and the project languished for more than four decades until an English professor at the University of Wisconsin-Madison got tired of waiting. Professor Frederic G. Cassidy started his own trial effort to catalog native dialects and published his findings in the society’s journal in 1953. Jolted by his initiative, the society formally pushed ahead with the nascent Dictionary of American Regional English, naming Cassidy — who later was known to exhort his staffers with “On to Z!” — as its editor in chief in 1962.

Between 1965 and 1970, about 80 Wisconsin graduate students rumbled across the country in specially outfitted campers called “word wagons” to conduct face-to-face interviews with lifelong natives in roughly 1,000 communities about the everyday words they used for things such as food and household items and for concepts like money, religion, and marriage.

In all, surveyors talked to 2,777 people who answered a 1,600-item questionnaire that took a week to complete, generating 2.3 million responses. Many of those surveyed also agreed to have their voices recorded as they spoke informally with the interviewers and read aloud a passage from the story “Arthur the Rat,” providing a rich trove of audio materials that capture regional, local, and personal syntax, pronunciations, lexicons, and inflections and allow for broad, contrasting analyses.

HUP published the dictionary’s first volume, spanning entries A through C, in 1985. The final volume came out last year. A sixth, companion volume that includes supplementary maps that identify the words typifying a particular state or region and lists of the various responses that interviewees gave to survey questions was released last January.

Researchers at UW-Madison announced last week that they will start a new round of surveys in those same Wisconsin communities to see how language has changed since the original fieldwork was done there nearly 50 years ago. That effort, to be done online, will be completed in 2015.

More than two years in the planning, the digital DARE marks “a major new chapter” in the dictionary’s history and has been eagerly anticipated by readers and librarians, HUP Director William P. Sisler said in a statement. The press plans to present the finished project to the American Library Association at its midwinter meeting next month.

“We intellectually knew that they had a lot of great data and it would be really interesting to do this, but it’s really come out better than we could have hoped,” said Emily Arkin, HUP’s senior editor for digital publication development.

The appeal of argot is far broader than one might expect for a specialty dictionary.

“There’s certainly a more scholarly audience of people who are lexicographers, dictionary specialists, or linguists. But we also find that it’s really popular for the performing arts — the creative arts in general — and writing,” especially for playwrights, said Arkin.

Because of the emphasis on mapping word origins and capturing obscure terminology, Arkin said DARE has been employed for a host of inquiries, such as helping detectives decipher ransom notes or giving families a vivid picture of how their forebears lived and spoke earlier in the 20th century.

Even staffers long familiar with the project are frequently delighted by the rich distinctions of American speech.

“We never get bored of looking at it,” said Arkin. “It’s so full of really interesting and fun words. We’re always discovering new things in it. ”