Are U.S. students falling behind? 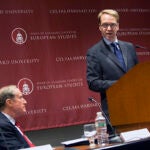 Massachusetts is doing well, but can’t say the same for rest of the country

The results of the latest Program for International Student Assessment tests have been released, and there is both good news and bad to report for U.S. students. Professor Paul Peterson, director of the Program on Education Policy and Governance at Harvard Kennedy School (HKS), puts it into perspective.

HKS: What are the most significant findings in this latest round of tests?

PETERSON: If you want to talk about the good news first, then you have to look at the state of Massachusetts because, once again, it’s showing that it’s doing very well on these tests. It’s comparable to the best countries around the world. We have put together a pretty good school system here in Massachusetts. It’s always been good, but it’s gotten better in recent years.

The bad news is that the country is not like Massachusetts. Only 2 percent of the students in the United States attend schools in Massachusetts. The other 98 percent aren’t doing so well, and the PISA [Program for International Student Assessment] results show us that … compared to three years ago, we’re down — down in math, down in science, down in reading. In reading, it’s not down by much, but it’s down, and the sad part is, is that we were moving up between 2006 and 2009 and that direction has now reversed itself.

HKS: The news is basically negative for American schoolkids?

PETERSON: Well, the Germans are doing well. The Germans are moving up year by year, and they were shocked at how bad they were performing back in the year 2000, and they have turned it around, and they are now No. 5 or 6 in the world. And the Canadians are doing very well. They’re right up there with the Germans in all three subjects, and the United States is way down the list. We are the lowest-performing OECD country — those are the industrialized countries — we’re the lowest other than Greece and Sweden. That’s, where we are now 28, 30 — way down the list, especially in math and science.

HKS: Are the trends for American schoolkids all negative?

PETERSON: We really need to pull up our socks and figure out how to do better.

HKS: To what do you attribute these negative results?

HKS: If you were to prescribe policy solutions, what would those be?

PETERSON: I think we have to tell our students what they need to learn and you can do that — like the Germans do — by having tests in very specific subjects, telling them that if you want to go on to university, you have to do well in these subjects. And they have a very good vocational program for those who are not going to go on to university, and so students have a choice.

But it’s a very definite program of studies that students are expected to follow in high school. We have a more ambiguous sense of what we want our high school students to learn in this country.

HKS: What are the consequences if we don’t find solutions for our education system?

PETERSON: Well, in the book that I’ve written with two colleagues, called “Endangering Prosperity: A Global View of the American School,” we point out that, unless we pull ourselves up to the level of the Canadians and the Germans, we are going to be foregoing about a half percent of GDP growth that we could otherwise enjoy, enough to pay 20 percent more to all of our workers over the course of the 21st century. So, this is not just a story about what’s happening in school. This is a story about what’s happening to the quality of our workforce. Our workforce has to be skilled in the 21st century, if we’re going to have a growing economy.