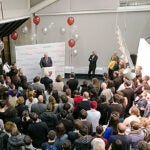 Those accepting will join Harvard College Class of 2018 in August

Admission notifications were sent today under the Early Action program to 992 prospective members of the Harvard College Class of 2018, which is scheduled to enter next August.  Last year, 892 were admitted early, and 774 the year before, when Early Action was restored after a four-year absence.

“This year’s applicants are remarkable by any standard.  Their academic and extracurricular strengths are impressive — as is their ethnic, economic, and geographic diversity,” said William R. Fitzsimmons, dean of admissions and financial aid.  “The larger number of admitted students is another indication that early admission is the ‘new normal,’ and that more of the nation’s and the world’s most promising students apply early to college.”

Early admission has a good deal of history at Harvard and in the Ivy League, beginning in the mid-1970s with the Class of 1981 when there were considerably smaller applicant pools at Harvard and peer institutions.  Various rules have governed early admission over the years.  In the decade prior to the suspension of Early Action, the numbers admitted early to Harvard College ranged from 813 to 1,186, with five years when 1,100 or more were admitted.

Harvard suspended Early Action beginning with the Class of 2012 due to concerns that such programs advantaged students who attended secondary schools that had more resources and better college counseling — while putting pressure on all students to make premature college choices.  Harvard restored Early Action for the Class of 2016 in the wake of the global financial crisis after it became clear that many students from low-income backgrounds were looking for the certainty provided by early financial aid awards.

“In restoring Early Action, we have emphasized the fact that applying early is not an advantage at Harvard, and that students should take the entire senior year to make the best possible college choice,” said Fitzsimmons. “When a student applies — either early or regular — has no bearing on whether he or she will ultimately be admitted.

“Given the large numbers applying to Harvard in recent years, over 35,000, the admissions committee is careful to admit only those who are certain to be admitted later,” he said.  “Last year, a significant number of students who were deferred in Early Action were admitted in the spring.”

Under Harvard’s Early Action program, admitted students are not obligated to attend.  Students applying under the Early Decision programs offered by many other colleges must attend if admitted.

This year, 4,692 students applied for Early Action, compared to 4,845 last year and 4,228 the year before.  “We are happy to see that Early Action numbers may be stabilizing after last year’s 15 percent increase.  The ‘early frenzy,’ as some have referred to it, adds pressure to a generation that is already stressed by high expectations and economic uncertainty,” said Fitzsimmons.

“Minority Early Action admissions increased once again this year,” said Marlyn E. McGrath, director of admissions.  “Latino admissions rose significantly from 70 last year to 104.  African-Americans rose from 77 to 98, and Asian-Americans from 193 to 209.  Native Hawaiians remained the same at 2, while Native Americans declined slightly from 14 to 9,” she said.

International numbers increased from 66 to 83, while U.S. dual citizens rose from 60 to 90.  “Three women in particular will add unusual diversity to the Class of 2018:  one from Afghanistan, another from Iran, and the third is a Syrian refugee who applied from Lebanon,” said McGrath.

It is still too early to determine precisely the socioeconomic composition of the admitted group because many students have not yet submitted financial information.  Nevertheless, preliminary data is encouraging.  “One hundred and twenty-two of this year’s admitted students requested application fee waivers, compared to 64 last year, a strong indication of substantial financial need,” said Sarah C. Donahue, director of financial aid.

Families with annual incomes of $65,000 or less are not required to contribute to their children’s educational expenses.  Those with incomes from $65,000 to $150,000 pay on a sliding scale up to 10 percent of annual income, and there is also need-based aid available to families with incomes greater than $150,000.  Families with significant assets in all income categories are asked to contribute more.  Home equity and retirement funds are not considered in the calculations, and students are no longer required to take out loans.  Close to 60 percent of Harvard students receive need-based financial aid and grants averaging more than $40,000.

“Harvard’s new Net Price Calculator, a simple one-page application available on both the admissions and financial aid websites, provides families with an estimate of their eligibility for assistance under Harvard’s generous need-based financial aid program,” she said.

Over the months ahead, faculty, staff, undergraduate recruiters, and alumni will use phone calls, emails, regular mailings, and social media to reach out to admitted students with information about Harvard.  Many Harvard clubs will host local parties during the winter holidays and in April.  All admitted students will be invited to Cambridge on April 26-28 for Visitas, a comprehensive program that enables students to experience life at Harvard firsthand.