Admissions, beyond a single test 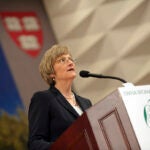 Harvard’s holistic model gets a tryout at Trinity College Dublin

In a few days, Harvard College will send out invitations to its newest prospective freshmen. Those emails, calls, and letters cap an arduous three-month, 40-person review of applicants — a record 35,023 this year. As with every new class, the search for the Class of 2017 was based not just on test scores, but on the activities, adversities, and other measures that reveal an applicant’s character, achievements, and talents.

Harvard has always been eager to share this “holistic admissions” model, even on academe’s world stage.

One case in point: On Jan. 14, William R. Fitzsimmons, dean of undergraduate admissions and financial aid, delivered a speech on admissions reform at the Royal Irish Academy — Ireland’s premier learning society — on behalf of Trinity College Dublin, the island nation’s flagship university.  Fitzsimmons was there at the invitation of Patrick Geoghegan, Trinity’s dean of undergraduate studies.  Their collaboration could lead to changes at Trinity and at institutions throughout Ireland.

The partnership between Trinity (founded in 1592) and Harvard (1636) is hardly new.  In the early 18th century, Trinity philosopher George Berkeley provided endowments for the library at Harvard, and during the 19th and 20th centuries the institutions enjoyed close educational and research collaborations.  Currently, Trinity faculty members have co-authored more papers with Harvard than with any other U.S. university.

Last summer, Geoghegan visited Fitzsimmons at Harvard to discuss admissions reform priorities expressed by Ruairi Quinn, Ireland’s minister for education and skills, and by Trinity Provost (the Irish title for President) Patrick Prendergast.  Traditionally, university admission in Ireland has depended on the Leaving Certificate Examination, a national test that is taken as the sole predictor of success in higher education. A centralized admissions system, started in the 1970s, underscored the importance of that single test Ireland-wide.

Trinity’s ongoing deliberations indicated that Harvard’s admissions process might provide a model for a feasibility study.  While testing and grades are considered in admissions at Harvard, the University takes a wide variety of factors into account.

The speech that Fitzsimmons gave was widely hailed in the Irish press.  The next day, The Irish Times published an abbreviated version.  It was an important moment in a national debate that that, off and on, had been churning in Ireland for 40 years, and it gave further impetus to admissions reform.

“His keynote address proved decisive,” said Geoghegan.  “Without it, there would have been a perception in Ireland that these proposed changes were unprecedented, dangerous, and reckless.”

Geoghegan pointed to one sign of Harvard’s admissions success: a 30 percent increase over the last decade in the number of applicants from “poor and modest backgrounds,” who now represent a quarter of Harvard undergraduates.  “We aspire to match these figures.”

“The battle for America’s moral and economic future will be won or lost in our classrooms, especially those serving less-affluent students in our inner cities and rural areas,” Fitzsimmons said in his speech.  “Perhaps one could say the same for Ireland.”

The January meeting launched a holistic admissions pilot program at Trinity that will admit its first freshmen in September 2014.  It’s a test of what may one day be a new, Ireland-wide norm for admissions.  The college will invite some applicants to supply “supplementary information” in addition to exam scores.

Fitzsimmons told his Irish audience it was “a pioneering program that could be transformative for Ireland,” one that would bring to Trinity and other universities “excellence in all its forms.”

For now, the pilot will focus on applicants for three Trinity undergraduate courses of study: history, law, and ancient and medieval history in culture.  Twenty-five places in the 2014 freshman class will be set aside for applicants admitted under the new process.

This summer, Geoghegan and a colleague will attend the Harvard Summer Institute on College Admissions. The weeklong program, directed by Fitzsimmons and now in its 53rd year, commonly draws 175 higher education and secondary school officials from around the United States and the world.

Anna Zimdars, a leading British academic authority on admissions, attended Harvard’s admissions institute and was present at the Royal Irish Academy for the launch of the feasibility study.  She noted to reporters the contribution of Harvard’s admissions procedures in shaping British policy.  During the past few years, there have been similar debates about admissions policies in the United Kingdom.

In 2011 Zimdars organized a major conference at the University of Manchester, at which Fitzsimmons was a keynote speaker.  His speech had far-reaching consequences, and its influence was noted last October in a major independent report produced for the British government called “University Challenge: How Higher Education Can Advance Social Mobility.”

Harvard President Drew Faust spoke in Ireland in June 2010 at an event co-organized by Trinity College Dublin.  The venue also was the Royal Irish Academy.

“I still remember her quoting a line from the great Irish poet Seamus Heaney, written in honor of Harvard’s 350th anniversary: ‘The books stand open and the gates unbarred,’” said Geoghegan.  “Trinity is Ireland’s oldest university, and Harvard is America’s.  We are proud that we have joined forces to ensure that for future generations of Irish students, the books will be open and the gates unbarred.”