Viral infections may have met their match 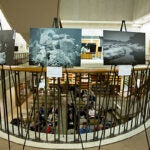 A Massachusetts General Hospital-led research team has identified an immune cell protein that is critical to setting off the body’s initial response against viral infection.

The report describes finding that a protein called GEF-H1 is essential to the ability of macrophages — major contributors to the innate immune system — to respond to viral infections such as influenza. The report will be published in an upcoming issue of Nature Immunology and is receiving early online release.

“The detection of viral genetic material inside an infected cell is critical to initiating the responses that signal the immune system to fight an infection and prevent its spread throughout the body,” said Hans-Christian Reinecker of the Center for the Study of Inflammatory Bowel Disease in the MGH Gastrointestinal Unit, senior author of the report. “Our findings indicate that GEF-H1 may control immune responses against a wide variety of RNA and DNA viruses that pose a threat to human health.”

The body’s first line of defense against infection, the innate immune system rapidly responds to invading pathogens by mobilizing white blood cells, chemical factors called cytokines, and antimicrobial peptides. When viruses invade cells, they often move toward the nucleus to replicate and sometimes to integrate their own genetic material into that of the host cell, traveling along structures called microtubules that cells use for internal protein transport. But how microtubule-based movement of viral components contributes to induction of the immune response has been unknown.

GEF-H1 is known to bind to microtubules, and previous research indicated that it has a role in immune recognition of bacteria. A series of experiments by Reinecker’s team found that GEF-H1 is expressed in macrophages — key components of the innate immune system — and activated in response to viral RNA, and that it controls the expression of beta interferon and other cytokines.  Mice in which expression of GEF-H1 was knocked out were unable to mount an effective immune response to influenza A and to encephalomyocarditis, a virus that causes several types of infection in animals.

“The sensing of intracellular viral nucleic acids for induction of interferons is so important that many viruses, including influenza A, have evolved specific strategies to interfere with activation of the interferon defense system,” said Reinecker, an associate professor of medicine at Harvard Medical School. “We are hopeful that this discovery will allow the development of new strategies to curtail viral mechanisms that impede the immune responses to infections that are often associated with high mortality rates.”