Underprepared for the next pandemic 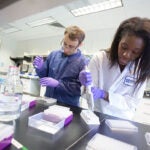 ‘Surge’ capacity lacking, even in Boston

Despite world-class hospitals and an army of highly trained medical personnel, the local health establishment doesn’t have the excess “surge” capacity to handle a flu pandemic outbreak.

And Boston isn’t alone. A panel of experts on pandemics and public health said Wednesday that not only is such capacity lacking in Boston, it is in short supply around the world and would affect everything from providing beds for the sick to the ability to make and distribute vaccines.

Barry spoke at the Harvard School of Public Health as part of a discussion about whether heath specialists are ready to handle the next pandemic. Though many people are thinking hard about the problem and keeping an eye on worrisome developments, such as a bird flu outbreak in China that has killed 45 and an outbreak of the SARS-like Middle East Respiratory Syndrome (MERS) that has killed 64, the global capacity to handle a major outbreak is still a work in progress.

The discussion, held by The Forum at Harvard School of Public Health, was presented in collaboration with Public Radio International’s “The World” and WGBH, and was part of the Forum’s Andelot Series on Current Science Controversies.

Joining Barry at the event were Marc Lipsitch, professor of epidemiology and director of HSPH’s Center for Communicable Disease Dynamics; Klaus Stohr, vice president and global head of influenza franchises for Novartis Vaccines and Diagnostics; and Robert Huebner, director of the Influenza Division of the U.S. Department of Health and Human Services’ Biomedical Advanced Research and Development Authority. The moderator was Peter Thomson, environment editor for PRI’s “The World.”

Lipsitch provided an overview on pandemics, saying that to qualify, a virus has to be both easily transmissible between humans and new to the human immune system. The last flu pandemic occurred in 2009, with the H1N1 virus. The 2002-2003 outbreak of severe acute respiratory syndrome (SARS) was caused by a coronavirus and killed more than 700.

Much of the event focused on flu, as past pandemics have killed millions. Vaccines are the best protection against a new flu virus. Though technology has improved production, it still takes weeks to create a new flu vaccine, months to get it to the public, and as long as a year to make it widely available around the world, Stohr said. Vaccine production remains dependent on the industrial capacity used to produce seasonal flu vaccine, and developing nations’ lack of capacity won’t change any time soon.

The news isn’t all bad, however. Stohr said there are new technologies on the horizon that can cut initial vaccine development to just a week from the current four to six weeks. It may take as long as a decade, but other production technologies are being developed that may make it affordable to build and maintain idle capacity in case of a pandemic.

Huebner, whose organization’s mission is to speed promising new technology to market in case of a pandemic, pointed to new ways to make vaccines and new types of medical devices, such as ventilators to help people in respiratory distress, as promising fields of research.

In addition to technological tools, public health officials are armed with low-tech options, such as surveillance of current threats and closing schools and other gathering places to stop the spread of disease.

Barry cautioned that such measures have to be implemented with an understanding of the potential effects — parents working jobs that don’t provide sick days may be forced to choose between staying home with their child and the income needed to provide for their families, she pointed out. In such a case, a child could be left home alone or sent to a day care where he or she would still be exposed to others or, worse, potentially carry infection to a new group of children.

Careful deliberation over implementation is important, she stressed. Recommendations that public health workers wear specific masks during the 2009 bird flu outbreak worked well in hospitals, for example, but in schools, health workers didn’t have masks and were still faced with lines of sick students. Such measures have to be communicated well or they’ll fail, Barry said. Communicators, in turn, have to strike the right balance between caution and panic.

Panelists agreed that national borders — whether closed in an emergency or not — are not a defense against a pandemic. Air transportation, for one, settles that. One study of closing borders in the United Kingdom estimated that it would slow the spread of a pandemic only by days.

“It’s a global problem, we have to face it,” Lipsitch said.

The event was covered via webcast.