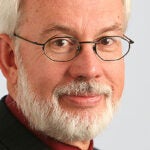 Getting the green light

How a professor went from his classroom at Harvard to the back rooms of Canadian national politics, and what he learned

It all started one night in 2004 over dinner at the Charles Hotel. Professor Michael Ignatieff and his wife, Zsuzsanna, sat down with three mysterious strangers, whom the couple later referred to as the “men in black.”

Their pitch to Ignatieff was as intriguing as it was audacious, given his background as an accomplished teacher, journalist, and novelist. Would he leave the Harvard Kennedy School (HKS) to run for leader of Canada’s beleaguered Liberal Party, and ultimately for prime minister?

“What didn’t well up inside me was laughter. It should have. The idea was preposterous,” Ignatieff writes in “Fire and Ashes: Success and Failure in Politics,” an elegant and unflinching memoir of his disastrous six-year flameout from the pillowy cocoon of academia into the foul trenches of modern politics. The book is out this month from Harvard University Press.

Ignatieff returned to his native Canada, winning election to the House of Commons in 2006. After losing a bid that year to become the Liberal Party leader, he was named deputy chief, a post he held until late 2008, when leader Stephane Dion resigned and “Iggy,” as he is known, was elevated to interim head. In 2009, he was elected leader, only to usher the party to its worst defeat in its history in 2011, winning just 34 seats in Parliament. Ignatieff, who even lost his own seat, resigned not long after that.

“But it’s not a book whose premise is ‘feel my pain.’ I feel good about having done it, I feel actually lucky to have done it, and I don’t regret doing it. I just think any honest account of politics has to talk about how bad it hurts the morning after you get clobbered. I think that’s important. It’s important to the truth of the experience.”

“Very few Harvard professors go straight from the classroom into the cold room of electoral politics — Elizabeth Warren’s done it and a few others … but rather few run for elective office,” he said. “So I thought, if you start from a classroom, what’s it like to do it? I thought it would be interesting to tell the story of what has to change inside your head, what has to change inside you, in order to do it.”

He currently teaches at the Munk School of Global Affairs at the University of Toronto, but will return to HKS in January to teach “Responsibility and Representation: Meeting the Demands of Public Office” and “Sovereignty and Intervention.”

In hindsight, it seems clear that his viability as a novice candidate — one best known as a public intellectual — who was running for national office in a country he hadn’t lived in for 30 years would be limited. But, Ignatieff said, when he decided to run, he was motivated by his family’s rich diplomatic history as well as by his belief in the nobility of public service and his faith in the egalitarianism and romance of democracy.

Ignatieff said writing the book was cathartic and clarifying in a way he had not expected. “It was important for me to realize that the one privilege of failure is that it gives you the right to speak well of a life that did not go so well for you. There’s a certain kind of authority that comes if you can praise politics despite the fact that you lost in politics.”

His Conservative Party opponents attacked him early as an elitist Cambridge carpetbagger. One damaging ad took a quote he had given the Harvard Crimson in 2005 — “If I am not elected, I imagine that I will ask Harvard to let me back” — to brand him as a globetrotter parachuting into Canadian national politics.

“I think I misunderstood the impact of Harvard. I’ve always been kind of proud I went to Harvard. I think most people who go to Harvard are,” said Ignatieff, Ph.D. ’76. “But it can be an electoral liability, let’s be frank, because people think, ‘Oh, he thinks he’s better than we are,’ and I never thought that.”

“Iggy was a strange mix,” said veteran journalist Peter C. Newman in an email. A caustic chronicler of Canadian politics, Newman wrote “When the Gods Changed: The Death of Liberal Canada,” a 2011 book about the party’s decline. “He was a trout out of water during his public appearances, lecturing instead of campaigning,” Newman said.

“He could have been prime minister if he had” taken “over before the Tories got their majority. The losses were not entirely his fault, but he acted as a catalyst on the road to ruin,” Newman said.

“I think there’s no question that I was a little detached from the realities of my party and didn’t understand how much trouble it was actually in,” Ignatieff said, adding that he accepts responsibility for the failures that occurred on his watch.

Ignatieff said he was shocked at how often his words were misunderstood by others, often by accident, but sometimes deliberately so, while he was out on the campaign trail.

“You fancy yourself as a communicator, and you suddenly discover you’re really not a good communicator in politics. Some of it has to do with understanding the distinction between expressive language and strategic language. All political language is strategic language. You’re trying to reach, convince, a certain audience and avoid trouble with other audiences. And every word counts. It’s not about expressing what you think and feel so much as making sure the message gets through to certain audiences.”

Ignatieff hopes “Fire and Ashes” will serve as a cautionary but inspiring tale for his students.

“I wanted to write a book that ended with a call to young people to step up because I teach public service, and I really do believe in the political life. So I didn’t want to lose sight of the faith that brought me into it in the first place. I don’t want to turn them off the one set of institutions that can make their lives, make a real difference to millions of peoples’ lives,” he said.