Technically, you are what you wear 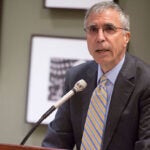 Ten years ago, the average American soldier on foot patrol carried roughly 100 pounds of gear. Though officials realized then they had to lighten the load, a recent follow-up study has shown that it has nonetheless increased to an average of 106 pounds.

Injuries — mainly to tendons, ligaments, and muscles — have become a serious problem, and a primary reason why soldiers are evacuated, given light duty, or even discharged, according to Lt. Col. Joseph Hitt, program manager of the Tactical Technology Office for the Defense Advanced Research Projects Agency (DARPA).

But help — designed in laboratories — may be coming soon. A new wave of wearable technology and enhanced, multifunctional clothing is being developed that can help U.S. soldiers and others whose needs range from the deadly seriousness of war-making to the frothy joys of entertainment.

From long john-like undergarments that help soldiers support back-bending loads to Google’s efforts to integrate the Internet and eyeglasses, pioneers in wearable technology and advanced, multifunctional clothing are making strides toward a new future that promises clothing that is not only smart but strong and fast as well.

Hitt described clothing and assistive gear that he expects will not only help foot soldiers shoulder heavy loads, but also help a team of Navy Seals — who already run six-minute miles — drop those times considerably.

Google is already demonstrating its hands-free, voice-activated Google Glass device, which bundles a smartphone’s functionality into a pair of eyeglasses. Google Glass developer Babak Parviz said the intent is to accelerate the device’s speed until it retrieves information almost as rapidly as thought itself, raising the question of what it really means to “know” something.

“What if you get the answer back so fast you feel you know it?” Parviz said. “We’re not where we want to be [with the device], but someday.”

Babak Parviz, creator of Google Glass and affiliate professor in the Department of Electrical Engineering at the University of Washington, discusses the origin and future of Google Glass.

Google and DARPA were among the highlights at an all-day symposium at Harvard’s Radcliffe Institute for Advanced Study last Friday that examined recent advances in “smart clothes.” Speakers at the event, held in Radcliffe’s Knafel Center, were experts in biology, design, materials science, engineering, medicine, and nanotechnology. They described products making their way through labs, as well as basic research to develop new materials that don’t just cover people, but give them advantages, potentially improving and protecting lives.

The event, Radcliffe’s annual science symposium, kicked off a series of lectures throughout the year on the topic of “smart clothes.”

The foot soldiers’ plight inspired DARPA’s Warrior Web program, described by Hitt. Involving laboratories around the country, including Harvard’s Wyss Institute for Biologically-Inspired Engineering, the work aims to create an undergarment that supports a soldier’s muscles, tendons, and ligaments, the soft tissue most often damaged.

Over the past 18 months, different laboratories have focused on creating assistive technology for different parts of the body. In the coming months, that technology will be tested on live subjects, and ultimately come together into a single garment. One important finding, Hitt said, is that a little assistance can provide large gains, but more can be counterproductive. A force equaling a 10 percent assist in running, for example, seems ideal, and can help an eight-minute mile runner reach five-minute miles, while a larger assist actually slows them down.

Hitt also provided a glimpse of DARPA’s work into robotics, which includes a voice-activated, four-legged machine that can follow a soldier into rough terrain while carrying hundreds of pounds of gear.

“Robotics is coming. There is a tsunami coming, and it’s going to hit you,” Hitt said.

Karen Gleason, a professor of chemical engineering at the Massachusetts Institute of Technology (MIT), described her work on vapor deposition, a method to lay down thin, even layers of materials on unconventional surfaces, such as rough cloth or flexible, foldable paper. Her research group has created functioning photovoltaic cells on paper, a substrate that would make them inexpensive as well as flexible while creating energy.

“You can really think about a lot of novel products and devices you can integrate these into,” Gleason said.

Christine Ortiz, an MIT professor of materials science and engineering, described her investigations into natural protective coverings, including those of an “armored fish,” Polypterus senegalus, whose scales are made of dentin, one of nature’s hardest substances. Despite this hard outer covering, the scales fit together in a way that allows the fish to be very flexible and capable of short bursts of speed.

Another speaker, Oren Milstein, president and chief scientific officer of StemRad Inc., described a new belt designed to protect first responders in a nuclear disaster or terrorist strike. Though it has long been known that some metals can block deadly gamma radiation, they are so heavy that protective suits incorporating them have been impractical, Milstein said.

By focusing on shielding just the areas of the body most vulnerable to the radiation — the pelvis, which holds the body’s largest reservoir of bone marrow — the belt allows first responders to extend the time they can spend in a radioactive hot zone.

“First responders count on mobility to save themselves and others,” Milstein said.