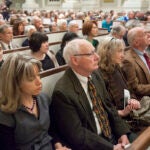 A poet’s own epitaphs

When is a garden more than a garden? When it combines art and science, unites theory and practice, incorporates experimentation and discovery, hosts a student competition, and is part of The Radcliffe Campaign’s launch.

A yearlong competition, creation, and construction project recently culminated in the unveiling of a dramatic work of public art. The inaugural Radcliffe Institute Public Art Competition began when Harvard students were invited to submit original design proposals for an open garden space in Radcliffe Yard.  More than 20 student teams offered ideas for how to use the space creatively.

A jury of six Harvard faculty members, including Dean Lizabeth Cohen of the Radcliffe Institute for Advanced Study, selected as winner “Saturate the Moment,” the work of Harvard Graduate School of Design (GSD) students Keojin Jin and Juhun Lee.

The artwork, explained Lee, is divided into two planes: one “representing the landscape” and another “representing moisture, air, and the environment.” Jin and Lee were inspired by the shell of the desert beetle, which collects condensation to survive. The surface of “Saturate the Moment” is designed to collect condensation, which will nourish plants below it and perpetuate a dynamic cycle.

Jin described the work as an opportunity to “think more deeply about our environment and how a physical, low-tech object can interact with the energy and vibrant atmosphere around it.”

The landscape sculpture consists of a resin composite framework whose parallel lines resemble a schematic of rippling radio waves that fold in on themselves. The structure is set atop a large swatch of lawn.

The ambitious project required the use of innovative materials. The undulating ribs of the piece were made at a boatyard, using marine construction products.

The project was built in a garden that has just been named in recognition of Susan S. Wallach ’68, J.D. ’71, and Kenneth L. Wallach ’68, J.D., ’72, who are involved with and champions of the Radcliffe Institute and Harvard University. The Susan S. and Kenneth L. Wallach Garden will host a new design competition every two years. The next cycle of the institute’s University-wide public art contest will begin later this month.

Click to see a time-lapse video of the construction of “Saturate the Moment” and its installation in Radcliffe Yard.

The artwork was revealed at a public event called Radcliffe Open Yard, which was an opportunity for the institute to share its people, programs, and collections.  In addition to the public art installation in the Wallach Garden, other student submissions to the competition were on display in Fay House.

In the gallery at Byerly Hall, Harvard students explained the simple toys and complex science at an exhibit created by mathematician and Radcliffe Fellow Tadashi Tokieda from the University of Cambridge, who is the 2013-2014 William and Flora Hewlett Foundation Fellow.  In the Schlesinger Library on the History of Women in America, select materials from the extensive Betty Friedan collection were exhibited to mark the 50th anniversary of her book “The Feminine Mystique” and the Presidential Report on American Women.

The Open Yard event was followed by a reception and dinner that officially kicked off The Radcliffe Campaign, “Invest in Ideas,” a $70 million component of The Harvard Campaign.  The campaign will build on the history of Radcliffe College and on the success of the ensuing Radcliffe Institute, founded in 1999, to create a future in which the institute can provide more ways to generate and share transformative ideas across Harvard and around the world.

At the launch, Harvard President Drew Faust, the founding dean of the institute, spoke about the ways her leadership there shaped her Harvard stewardship.  She said that the lessons learned at Radcliffe — including the importance of connecting people across disciplines, integrating the arts, and committing to a bold vision of inclusion — have been “critical for my presidency at Harvard and how I’ve thought about the broader University and what it could be, and what it should be.”

The evening events echoed those values and included brief presentations by John Huth, the Donner Professor of Physics who co-directs the science program at Radcliffe; author Gish Jen ’77, BI ’87, RI ’02; and composers Tarik O’Regan, RI ’05, and Augusta Read Thomas, BI ’91, all of whom have contributed to and benefited from Radcliffe’s commitment to providing support for individual pursuits in a multidisciplinary environment.

Susan Wallach, co-chair of The Radcliffe Campaign, introduced Faust, and relayed that good progress had been made toward the fundraising goal, with 37 percent of the $70 million already raised.

Cohen shared her vision for the institute and how to provide leading thinkers at all levels and in all fields with the time and support to be creative, focused, and exploratory, leading to more “original research, groundbreaking books, important public-policy recommendations, scientific discoveries, bold artistic work, and new technologies.”  Cohen said The Radcliffe Campaign is dedicated to “the future of ideas and ideas of the future.”

Campaign co-chair Sidney R. Knafel ’52, M.B.A. ’54, spoke to the guests gathered at the Knafel Center (formerly the Radcliffe Gymnasium) to celebrate and plan for the future.  “Each of us has had a discrete variety of connections to the Radcliffe Institute for Advanced Study,” he told the audience of engaged volunteers, University leaders, Harvard faculty, Radcliffe Fellows, researchers, and undergraduates working as Radcliffe Research Partners.  “We also have a few things in common.  We all care about the creation and sharing of knowledge.”

The public and private events of the day concluded with a new video about Radcliffe Institute and a rousing a capella performance by the Radcliffe Choral Society.