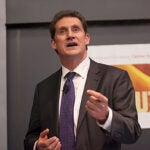 Tadashi Tokieda drops a small cedar ball into an empty soup bowl and begins swirling the bowl on a tabletop with his hand.

As the bowl moves in circles, so does the ball. Tokieda adds a second ball and a third, and they swirl, too. When he adds a fourth, the balls’ smooth movements become jerky. A fifth and sixth add to the confusion as the balls are influenced not just by the bowl’s movement, but also by their interactions with each other.

A seventh ball triggers something odd. The confusion subsides, and the balls, now influenced largely by their interactions with each other, begin to swirl in the opposite direction of the bowl’s motion. Tokieda explains that the change is analogous to the shift of particles moving freely in a gas to those crowded in a liquid.

“A transition takes place,” Tokieda tells the crowd watching his demonstration earlier this month at the Radcliffe Institute for Advanced Study’s Fay House. “It’s metaphorically like vapor condensing to water.”

Tokieda, director of studies in mathematics at Cambridge University’s Trinity Hall, is spending this academic year as a Radcliffe Fellow. His day job at Cambridge involves high-level geometry and the mathematics of Hamiltonian systems, a type of mechanics that describes the movement of planets.

Several years ago, Tokieda decided to use simple toys to demonstrate to family and friends the complex mathematical problems on which he works. As he searched for illuminating objects from everyday life, he came across surprising behavior — sometimes complex behavior — routinely exhibited by simple objects. Eventually, his search for objects with which to teach became a search for objects from which to learn.

To date, Tokieda has collected, invented, and analyzed more than 100 “toys,” ranging from spinning plastic tubes to small tops, a Slinky to illustrate tension and gravity, a mug and a spoon to tap out bell-like sounds, and glass jars partially filled with rice that roll down wooden ramps at varying speeds because of differences in how the rice moves inside the jars.

In this video, we see spinning toys with peculiar preferences for direction and orientation, a propeller that rotates by vibrations, and how to screw a nut on a bolt using an electric toothbrush. To learn more, view the “Toys in Applied Mathematics” video.

Tokieda is spending his year as the William and Flora Hewlett Foundation Fellow making his scientific toys widely available by developing durable models, Web-based presentations, texts, photos, and movies. He’s also discovering new toys, sharing his ideas with audiences, and developing an exhibition — which opened this month in Byerly Hall — to bring these concepts to the public.

Though the toys tend to be simple, the scientific concepts behind them often are not. It’s that combination of a simple object, surprising behavior, and sophisticated underlying principles that Tokieda is looking for, and that he hopes will draw in others from different scientific backgrounds.

Tokieda’s goal is to convince people that science isn’t just something performed in remote laboratories by formula-spouting specialists in white coats. Rather, it is alive, fascinating, and present all around.

“We have the impression of science as institutionalized and of scientists with thick glasses and lab coats,” Tokieda said. “If you believe science is all around us, as it is, you should be able to find science everywhere. It is in the daily life of everyone.”

Tokieda grew up in Japan thinking he would become an artist. When he was 14, he left home for high school in Bordeaux, France, where he began studying languages. He later returned to Tokyo to specialize in classics.

When he was in his 20s, he picked up a book about a Russian physicist who disdained people not proficient in calculus. Tokieda hadn’t even heard of calculus and set about remedying the situation. Learning first from books and then through formal lessons, he discovered he enjoyed math. He left the classics and continued his studies in mathematics, eventually earning a doctorate from Princeton University and joining the faculty at Cambridge.

To find new toys, Tokieda keeps his attitude playful and his eyes open. In the introduction to his Radcliffe exhibit, he describes the oft-cited scenario of a small child opening a present and, intrigued by the paper, playing with that instead of the toy.

Many scientists are like an older child opening the same package. They know what’s supposed to be interesting, so they focus on that, forgetting the potential magic of the unconventional: the crinkly paper.

“I am suggesting that in science,” Tokieda wrote, “we rediscover the eyes of the child.”

Tadashi Tokieda’s exhibit will have extended hours on Monday (Oct. 28) as part of Radcliffe Open Yard, a public event from 4:30 to 6 p.m. that will highlight his show, an exhibit of items from the Betty Friedan collection at the Schlesinger Library, and a new public art garden.  In the Byerly Hall Gallery, Harvard students will demonstrate and explain the toys and the scientific principles they illustrate.  The exhibit closes on Nov. 1.