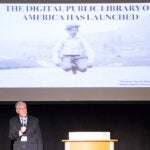 These days you can’t turn on the television without a zombie, a witch, or a vampire flashing or — in the case of the zombies — moving at a steady, 18-minute-mile pace across the screen.

Horror films regularly reign at the box office, like one of last summer’s biggest hits, “The Conjuring,” an old-fashioned ghost story made on a modest budget that pulled in close to $140 million in theaters. And horror master Stephen King’s “Doctor Sleep,” a sequel to his 1977 classic “The Shining,” has nabbed a top-five spot on The New York Times Best Sellers list for the past month.

So what’s behind the enduring fascination with horror? Several Harvard experts recently offered their insights into the powerful and lasting lure of the genre.

The psychology of fear

Psychiatrist Steven Schlozman, an assistant professor of psychiatry at Harvard Medical School, explained that those who seek out things like horror films do so not because “they can handle it,” but because they want to be scared out of their wits.

“You might think that people who enjoy the scary movies are the ones who walk in there and say ‘I’m not bothered.’ But if you do the measurement, not only ask them if they are scared, but measure signs of autonomic arousal that correlate with fear, things like increased heart rate and increased respiratory rate … you will see that people who come out of a movie saying ‘that was great’ … are also people who were really frightened.”

Schlozman said those individuals fall to one end of something called the “need for affect” scale, which ranks people based on how much they enjoy feeling powerful emotions. They are the daredevils who crave the rush they feel while riding roller coasters or parachuting out of planes. They are also people with a keen ability to analyze their fear.

Thrill seekers watching a scary movie are tapping into the primitive fight-or-flight response, but they are also engaged in a cognitive game of pattern recognition, said Schlozman, trying to figure out why they are scared, or where they may have seen the images on the screen before.

Schlozman used an image of a puppy to make his point. When you show a random group of people a picture of a puppy, he said, most respond by saying something like “that’s so cute.” But Photoshop a pair of cat’s eyes onto the puppy’s image, and everything changes. “Now you are messing with pattern recognition. You have two recognizable patterns that don’t belong in the same picture, and that freaks people out.”

Schlozman said it’s the people who enjoy the exercise of asking themselves, “What is it about this picture that I don’t like?” who have the most fun. “Each time you verge more toward the uncanny, [those] folks get the feeling in their gut that things aren’t right, and the more fun they have.”

Schlozman is himself a minor celebrity in horror circles. A longtime fan of the genre, he is the author of “The Zombie Autopsies: Secret Notebooks from the Apocalypse,” a work that grew out of a fake medical paper he wrote examining exactly what goes wrong with a zombie brain and “how do we fix it.” Famed director George Romero, creator of the iconic zombie film “Night of the Living Dead,” recently optioned the film rights for the book, and the two have been developing a script.

While he has loved horror movies since he was a kid, Schlozman said today he is drawn to films that are scary, fun, and offer some kind of redemption.

“The kind of horror I like, and the kind that I think has the most staying power, are less about the monsters and more about the way people band together to hold off the monsters; they are about friendships,” said Schlozman. “Stephen King’s secret, it feels like to me, has been less about what [the evil] is … and more about how these kids are drawn together, and somehow have to figure out how to fight this thing, and in doing that learn a whole lot about themselves and achieve a certain amount of redemption.”

For Schlozman, horror also has to be fun. Zombies at an ice skating rink, he said, referencing a classic scene in Romero’s “Dawn of the Dead,” from 1978, “that’s funny.”

A self-portrait of horror

Many experts argue that the horror genre allows viewers or readers to stare down their own monstrosity or mortality from a safe distance.

King himself made that point in his brief essay “Why We Crave Horror Movies.” “The mythic horror movie, like the sick joke, has a dirty job to do,” he wrote. “It deliberately appeals to all that is worst in us. It is morbidity unchained, our most base instincts let free, our nastiest fantasies realized.”

Such is the case with many a classic horror novel or Brothers Grimm fairy tale, said Maria Tatar, the John L. Loeb Professor of Germanic Languages and Literatures and of Folklore and Mythology. “We want to figure out what if,” said Tatar. “We use stories, storytelling, and literature, I think, just to explore the great unknowns … the worst-case possible scenarios.”

When it comes to the horror genre in literature, Tatar always returns to the “great landmarks of horror,” works like Mary Shelley’s “Frankenstein,” Bram Stoker’s “Dracula,” and Robert Louis Stevenson’s “Strange Case of Dr. Jekyll and Mr. Hyde.”

“Those are the stories that really remind us that the monsters are us in a way, because Frankenstein is actually the name of the doctor who creates the monster in his own image … [In] ‘Jekyll and Hyde’ the supposedly normal cohabits with the monstrous … [and] ‘Dracula,’ who is not an alien in any way, but belongs to the undead, is a human being who should be in the grave but isn’t.”

“It is sort of like death by proxy. … There’s a fascination, and then there’s repulsion, but also a little bit of a sense of triumph that we are survivors. We made it out alive … I think that is part of it.”
— Maria Tatar, the John L. Loeb Professor of Germanic Languages and Literatures and of Folklore and Mythology

In addition to the classics, Tatar, whose son-in-law runs the production company behind recent horror hits like “Paranormal Activity,” “Sinister,” and “The Purge,” includes a current cultural touchstone in the category: the megahit TV show “Breaking Bad” about a science teacher turned drug dealer.

Tatar, a big fan of the series, called watching bodies on the screen decomposing in acid, or seeing people being blown up “truly horror.” But such graphic content, she suggested, also allows viewers to face their own mortality.

“It is sort of like death by proxy. We get to see what happens, the horrors of decomposition, disintegration, being blown up. … There’s a fascination, and then there’s repulsion, but also a little bit of a sense of triumph that we are survivors. We made it out alive … I think that is part of it.”

Tapping an emotional and cultural nerve

At the Harvard Film Archive, a recent series titled “The Complete Alfred Hitchcock,” was a wild success.

“People keep coming back to him,” said the archive’s publicist and resident horror film expert Brittany Gravely, who studied film at the School of the Museum of Fine Arts and produced her own short experimental movie titled “Blood of the Earthworm.”

Hitchcock’s iconic horror classics are popular, she said, in large part because the director used pioneering techniques to heighten the suspense, creating images that “are just locked into our cultural psyche.”

Such movies tend to gain traction because they are playing out developments “happening globally, actual events, people actually getting tortured that we can’t do anything about, or our fears about privacy, technology, and surveillance,” said Gravely. “That is one thing that I’ve always liked about horror films. It allows all this stuff to get played out in this safe space.”

People who grew up in the ’80s will likely remember the horror comedy classic “Gremlins,” about a bunch of furry critters that multiply when wet, and turn vicious when overfed. Harvard lecturer on history and literature Wendy Lee recently screened the film in her College class “Zombies, Monsters, and Super Heroes: The Fantastic in 20th-Century America.”

Her course “examines how three fantastic figures — monsters, comic-book superheroes, and zombies — have played key roles in how Americans negotiate their relationships to the past, the present, and potential futures,” notes the course’s website. The syllabus includes texts like the zombie novel “Zone One” by Colson Whitehead and a video of the ’60s TV comedy “The Addams Family.”

“I try to explore with my students how the supernatural in general and horror and monsters especially are ways in which our cultural objects, or texts … are sort of exploring changing cultural norms and the boundaries of what is considered normal and deviant.”

After watching “Gremlins,” Lee and her students discussed how the gremlins, or “Mogwai” from Chinatown, represented a U.S. fear of Japan’s burgeoning economy at the time.

If you have one mogwai, Lee explained, it’s cute. But if you get them wet and they multiply, “then they take over your town and destroy it. So there is the way in which this is a parallel for the American town as a stand-in for the nation, and this fear of the Japanese economic miracle.”

Similarly, many horror TV shows today, like the vampire hit “True Blood,” push the traditional definition of relationships by pairing humans with vampires or otherworldly creatures. “The key to the supernatural,” said Lee, “is it’s a way to explore changes and anxieties about changes.”

Also on Lee’s required reading list is the Centers for Disease Control and Prevention’s zombie preparedness text, a tongue-in-cheek campaign that has turned into a valuable disaster-preparedness platform.

It’s interesting how fiction or fantasy or horror, said Lee, can shape “the way we talk about real things, and the way we understand the real world.”