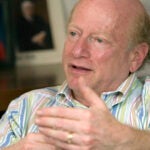 Schools champion, congresswoman honored for service to others

Jack Schlossberg, grandson of President John F. Kennedy, honored the founder of an online charity that supports public schools and a combat veteran who is now a congresswoman during the 2013 John F. Kennedy New Frontier Awards ceremony Monday evening.

A junior at Yale University and a member of the New Frontier Awards Committee, Schlossberg took over as presenter from his mother, Caroline Kennedy, who recently became U.S. ambassador to Japan.

Schlossberg noted that the New Frontier Awards reflect one of the most important qualities his grandfather possessed:  “As the youngest president elected, he embodied the soaring energy of a youthful spirit, and that enabled him to meet the challenges of his day with the intense energy that they required. Today, we remember that remarkable quality that defines his life, and we celebrate it in the achievements and promise of the two recipients of the New Frontier Awards.”

Charles Best, a former Bronx high school teacher, was recognized for creating in 2000 the website DonorsChoose.org, an online charity that allows people to provide direct support to public school teachers and students for classroom projects.  To date, more than a million donors have given a total of more than $200 million in support.

In accepting the award, Best noted the company is now embarking on an expanded mission by opening its data to governments to see where needs exist, and to interested people with ideas for improving education so they can reach teachers directly through the site.

“What your award is doing is shining a spotlight, lending legitimacy and authority and significance to this new frontier of impact that we are now exploring,” Best said.

U.S. Rep. Tulsi Gabbard, a Hawaiian Democrat and a combat veteran who served two tours in the Middle East, received the Fenn Award, which honors an elected official. The award is named in honor of Dan Fenn, the first director of the Kennedy Presidential Library and a member of President Kennedy’s staff, who now teaches at the Harvard Kennedy School.

At 21, Gabbard was elected to the Hawaii legislature. Last year, she was elected to the House. She pushed through her first piece of legislation with unanimous support, the Helping Heroes Fly Act, which streamlines airport security for injured and disabled veterans.

Referring to President Kennedy’s call to action, Gabbard said people serve by stepping outside of the “safe boxes that we have created in our own lives and looking outward.” Looking beyond ourselves, she said, “enables us to see past the boundaries that often set limitations in our own lives and creates opportunities to be impactful in ways we could never imagine.”

The New Frontier Awards were created in 2004 by the John F. Kennedy Library Foundation and the Institute of Politics to honor Americans under age 40 who have made special contributions through public service.  Past honorees have included U.S. Sen. Cory Booker in 2008 and Wendy Kopp, founder and CEO of Teach for America, in 2004.