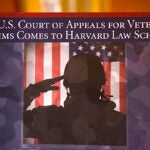 A case for veterans

If you know Peter Hart, it’s not hard to find him on the first Tuesday in November. For the last 48 years, Hart has spent every national election night working into the wee hours, first at CBS News and later at NBC News headquarters as one of the nation’s leading public opinion analysts.

“What I love about my profession is I get to go deep. I get to find out what’s on your mind and what you’re thinking and why it’s important,” said Hart, who is teaching public opinion techniques and strategies as the Visiting Murrow Lecturer of the Practice of Press and Public Policy at the Joan Shorenstein Center on the Press, Politics, and Public Policy this fall.

Good polling isn’t about the daily horse race of who’s up or down, but what moves voters.

“I certainly look at myself as someone who tries to understand what’s underneath,” he said in an interview. “It’s the ability to get at the guts of what people are thinking and where they’re coming from. If you get the visceral reactions, then you really get a sense of who they are and what they’re about.”

Hart, who regularly teaches at the University of California, Berkeley, said his course, “Polling in the Real World: Using Survey Research to Win Elections and Govern,” isn’t about training the next generation of pollsters or diving headlong into arcane subjects like regression analysis or statistical variations.

Students produce group projects that incorporate focus groups, surveys, tabulations, analyses, reports, and presentations, and they hear from political notables such as David Axelrod, a top adviser and strategist for President Obama’s 2008 and 2012 presidential campaigns.

One recent class featured a lively, candid talk with former Massachusetts Gov. Michael Dukakis, who admitted that his failure to gather the necessary information from the field and to grasp the significance of polling data on hand helped to derail his 1988 presidential run.

“I blew it, to tell you the truth,” Dukakis told students, noting that candidates then weren’t as absorbed with polling or as savvy about what the data revealed as they are today.

“My point to every one of them is: I have no idea what you’re going to do, but I will tell you personally and professionally, you will use polling the rest of your life,” said Hart. “And what I want you to get out of this is the ability to understand what is a good poll, what’s a bad poll, how do you construct a poll, and how do you analyze a poll, and what do you do with the information once you have it.”

Hart got his start in 1964 coding open-ended poll questions for the legendary Louis Harris, who had been President John F. Kennedy’s personal pollster. In 1971, the disciple opened Peter D. Hart Research Associates, where today he is chairman emeritus.

From interviews that were once conducted door-to-door and are now done via cellphone and online, Hart said survey research has changed dramatically since his earliest days in the business.

“What used to take us seven days to do — if we were just lightning-fast — can be done in seven hours or seven minutes, as the case may be,” he said. “The benefit of speed is that an event happens and you can get opinion very, very quickly. That has the advantage of obviously being in the loop or being in the cycle. The disadvantage is sometimes you need time to breathe in something.”

But even with faster results, technology hasn’t necessarily improved the accuracy of survey research across the board, Hart said. “In some respects, we’re being much more accurate. In other respects, we don’t have any accuracy at all because we assume all polls are equal. They aren’t equal. The methodology is so important, the questionnaire order, etc.”

With at least 90 organizations putting out poll numbers during the 2012 presidential election, Hart said that it has been “very difficult” for voters to gauge whether a poll is reliable, and that good information can get buried among the noise.

“It’s terrible. It hurts the industry, it hurts the credibility, but it’s also the problem of the journalists. The journalists think any two numbers followed by a percentage that add up to 100 means it’s a good poll. There are so many things that go into it,” he said.

Although he no longer represents candidates, Hart has worked with more than 40 U.S. senators and 30 governors on the Democratic side, including Edward Kennedy, John Glenn, Hubert Humphrey, and Bill Bradley.

“People think of it as just scientific. In reality, we care desperately. These people are family, and it’s not a paycheck. You’re trying to change democracy. You believe in something,” said Hart. “I don’t want to say that I agree with every stand all my candidates take, but my philosophy always was, ‘I believe in this person, and for the state that they’re working in, that’s the best person.’”

Hart’s firm, which co-produces the NBC News/Wall Street Journal poll with Republican pollster Bill McInturff of Public Opinion Strategies, jolted many in the political world recently with the results from two surveys.

An Oct. 10 poll showed that 53 percent of respondents blamed the Republican Party for the federal government shutdown over Obama (31 percent). And cumulatively, they gave Republicans their worst approval numbers since the poll began in 1989. An Oct. 31 poll found that only 42 percent approved of Obama’s job performance and just 22 percent viewed Republicans favorably; 63 percent said they wanted to replace their congressional representatives.

“And if we don’t pay attention to it, at some stage, people are going to wake up and say, ‘What happened?’”