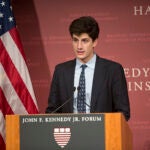 Blurring of roles distracts from inflation focus, he says

Central banks should focus more on fighting inflation and less on bailing out struggling governments and lagging economies, the head of Germany’s central bank said Monday during a talk at the Minda de Gunzburg Center for European Studies.

Several central banks, including the European Central Bank, have stepped in to help manage the global financial crisis in recent years, buying government bonds and keeping interest rates near zero in order to stimulate the economy. But Weidmann cautioned against asking too much of such institutions, saying they could lose sight of inflation if loaded with other priorities.

“By piling more and more stabilization tasks onto monetary policy, stability will prove ever more elusive,” he said.

To reinforce his point, Weidmann analogized church and state to politics and civil society, saying that just as the former allows for freedom of religion, the latter permits free markets to operate. The independence and freedom of central banks have allowed them to effectively fight inflation in the past, he said.

Tough times have blurred boundaries, with governments bailing out financial institutions and central banks gearing policy to support governments and the broader economy. The situation is fraught with risk, Weidmann said.

“By tearing down the walls between monetary, fiscal, and financial policy, the freedom of central banks to achieve different ends will diminish rather than flourish. Monetary policy runs the risk of becoming subject to financial and fiscal dominance.”

The potential of mixed responsibilities to cause imbalance is particularly acute in Europe, Weidmann said, where the monetary union that created the euro has taken monetary policy beyond national borders and made it a shared responsibility, while decisions on taxes and spending remain at the national level.

One way of addressing this imbalance would be for countries to hand budgeting power — and with it a measure of their sovereignty — to the European government. The idea has met with strong resistance, however.

Another possibility would be to de-link monetary policy from government fiscal policy and from the private financial world. Severing those ties would allow individual banks and even governments to fail, but reduce the risk to the broader financial system.

Experiences in Ireland, where stability was risked to bail out banks, and Greece, whose enormous debt hurt the broader economy, illustrate the both ends of the issue.

One idea for severing what Weidmann called the “sovereign-bank doom loop”: end the practice of assigning government bonds zero risk and cap the amount of sovereign debt held by non-central banks, as is already done with other kinds of investments. This would reduce banks’ exposure to government fiscal problems and insulate the broader financial system against government budget woes.

“With regard to the euro area, the assumption that all sovereign bonds are risk-free means that all bonds are treated alike, regardless of fundamentals. This calls into question market discipline and is, obviously, not in line with recent history,” he said.

In a question-and-answer session after the talk, some in the audience wondered whether such an approach might worsen the current situation, where the Eurozone has its highest unemployment on record (12.2 percent) even though inflation is at its lowest point in four years (0.8 percent). Weidmann allowed that it might, but predicted long-term benefits. Institutions hobbled by an accumulation of short-term crisis measures won’t work over time.

“We will be facing the same situation in a couple of years’ time, and people will ask us, ‘Why didn’t you do something?’”