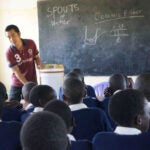 When Joanne Chang ’91 was approached by a cable TV network in 2006 to host a show about the science of sweets, she was thrilled. The owner of the landmark Flour Bakery and graduate of Harvard College, where she was an applied mathematics concentrator, Chang always enjoys discussing her pastries, but she loves talking about them at the molecular level best.

So she was disappointed when out jumped celebrity chef Bobby Flay, challenging her to a cook-off of her famous sticky buns for his show “Throwdown.” There would be no science TV show. It had all been a ruse.

But Chang got her moment in the sun Monday evening at the Science Center where, to a packed house, she delved into the basis of sweets as part of the Science and Cooking lecture series sponsored by the Harvard School of Engineering and Applied Sciences.

Reassuring the crowd that there was cake waiting to be had after the lecture, Chang whet the audience’s appetites with pictures of her breads, cakes, pies, and creampuffs.

“You start with a certain number of ingredients. But based on portion, temperature, time, you end up with fantastically different products,” she said.

Most recipes use the same ingredients, she said, meaning butter, sugar, and eggs — and of course flour, the night’s star ingredient. Chang explained the differences between all-purpose, pastry, and cake flours, which vary in their levels of gluten.

Gluten was the night’s buzzword. It’s responsible for really good bread because the gluten serves as food for the yeast that eats it and digests it, “making gas bubbles, causing bread to rise,” Chang explained. But gluten is also the culprit to blame for a tough cake.

Chang spent most of the night offering the scientific backdrop of baking, with helpful hints for novice chefs, and addressing common kitchen pitfalls. Calibrate your ovens, she warned the crowd, since most are 30 degrees off. Always weigh your measured ingredients for accuracy. Demonstrating a simple baking technique with caramelized sugar, Chang created a spun-sugar net on a tower of cream puffs, known as croquembouche.

Chang said her baking is inspired by other chefs, by travel, by magazines, by Instagram, and by her staffers, who are always making suggestions and coming to her with ideas.

“Every recipe has been created,” said Chang. “We just make permutations of it.”

Now at work on a cookbook of low-sugar/no-sugar desserts — she refuses to work with artificial sweeteners — Chang is constantly testing recipes.

“A lot of baking is patience,” she said.

And with that, the door flung open, and out came the cake — enough to feed the crowd twice. It was light, moist, and perfect.