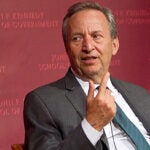 In Washington, two Harvard deans probe the public roles of religion and politics

Everyone knows the old saying that there are two subjects unfit for polite company: religion and politics. But both mixed peacefully during a panel discussion at the Newseum Institute in Washington, D.C. There was even a punch line: that public policies would benefit from understanding private faiths.

Within sight of the U.S. Capitol — the American symbol lately of dysfunction and division — two Harvard deans faced off in a discussion titled “Religion and Politics in a World of Conflict.” In both arenas, they said, leadership is vital to maintaining a steady, open, middle path to resolving differences.

“Peacemaking can sound like surrender,” said David N. Hempton, a historian of Protestant evangelical Christianity who is dean of the Harvard Divinity School (HDS). When conflict starts up, you need religious leaders with a sense of restraint, he said, drawing on lessons from his boyhood in divided Northern Ireland. And when conflict winds down, you need “real, imaginative leadership,” said Hempton, the Alonzo L. McDonald Family Professor of Evangelical Theological Studies and John Lord O’Brian Professor of Divinity.

The issue is close to Hempton’s heart. In his 2012 convocation address, he stood aside from the traditional topic of theological studies to deliver “The Fog of Religious Conflict,” a rumination on the religious war he witnessed as a youth.

In some regions of the world, religious leaders have the power either to incite or to calm civil conflict, said David T. Ellwood, dean and the Scott M. Black Professor of Political Economy at the Harvard Kennedy School (HKS). Knowing that can produce consequences, he said, because in many parts of the world “ethnic and religious violence have replaced traditional country-on-country violence.”

Wherever conflict involves clashing faiths, religious leaders are in a bind, said Hempton. “They have constituents they can’t stray too far from,” which means that any conciliatory gesture “takes inside courage.”

The same inside courage is required at conflict’s end, said Ellwood, a recent visitor to Myanmar. He called it “the happiest place in the world I’ve been in a long, long time” because of the prospect of national elections in 2015. And yet in the face of unfolding religious violence there, the presumptive heir to political power, opposition leader Aung San Suu Kyi, has not spoken out. “She’s made the transition from icon to political leader,” said Ellwood, “and that’s essential.”

Seated between the two deans was Shaun Casey, the special adviser heading the new Office of Faith-Based Community Initiatives at the U.S. State Department. He’s a professor of Christian ethics at Wesley Theological Seminary in Washington, and — the ideal moderator — a graduate of both HKS and HDS.

“It’s an astonishing high to be at the State Department,” he said, and brings a cultural perspective to the policy world. “You ignore religion at your peril.”

The two deans also had the benefit of an engaged audience, including many graduates of Harvard’s Schools of government and divinity working in the Washington, D.C., region. Allison Shapira, MC/MPA ’10, who spoke briefly, represented the Harvard Kennedy School D.C. Alumni Council and its 9,000 area HKS graduates, “the largest number in the world in one place.” The HDS Alumni/Alumnae Council was represented in the audience too, and has about 500 area members.

Casey said his gracious acceptance at the State Department was an acknowledgment that understanding religion matters to policymakers, and is a sign of something that might be fruitful in the academic realm, namely, “the opportunity to cross-train students” in both politics and “lived religion.”

But bringing issues of faith to the State Department leads some foreign observers to see that as “some kind of new soft American imperialism,” said Hempton. Casey agreed that the perception was out there, and saw the need for policymakers to avoid an acknowledgment of faith becoming an imposition of values. “We have to be humble,” he said.

At the same time, Americans and others have to see the power of “the fundamental values we have as a people,” said Ellwood, and how potent they can be in creating change.

Those values can be embodied and preserved by religious tradition. “We think most religious interference is for bad reasons,” said Hempton, but “a lot of good is being done. Religion isn’t always the bad actor.”

Religious leaders are not setting a good example at the moment, said Ellwood, though he held out Pope Francis as an example of the change-making power that faith leaders can have. Nations are not leading by example either, he said, adding, “It hasn’t been a great stretch for democracy.”

This all may be part of a cycle because “we get into these cul-de-sacs once in a while,” said Ellwood. Or these conditions may be a form of universalized dysfunction on the verge of becoming permanent and structural. “Not surprisingly,” he said of both religion and politics, “leadership really matters.”