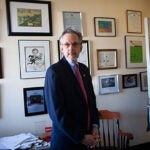 If “corporations are people,” can they also be religious people? The U.S. Supreme Court agreed Tuesday to hear two challenges to the Affordable Care Act involving for-profit companies that object on religious grounds to providing contraceptive coverage to their employees.

Sebelius v. Hobby Lobby Stores Inc. involves a family that operates an Oklahoma-based company of more than 500 arts and crafts shops in 41 states with 13,000 workers who would be eligible for health insurance coverage under the act, as well as an affiliated string of 35 Christian-themed bookstores. The suit argues that the company should not be forced to offer birth control services because that would violate their exercise of religious freedoms under the 1993 Religious Freedom Restoration Act.

To gain a sense of the issues involved, the Gazette spoke with Mark Tushnet, William Nelson Cromwell Professor of Law at Harvard Law School, about the cases and what’s at stake in them.

GAZETTE: What’s the significance of the court taking up these two particular cases?

TUSHNET: The two cases together present the whole range of issues that the contraceptive mandate for private businesses raises. There’s [an] issue about whether it’s constitutionally permissible to require private businesses to provide this kind of insurance. And then there’s a statutory issue about whether, even if it’s constitutionally permissible to require the coverage, there’s a statute, the Religious Freedom Restoration Act, that might make it unlawful … to require the coverage.

GAZETTE: How does the Religious Freedom Restoration Act factor into this debate?

TUSHNET: The act says that significant burdens on religious conscience have to be strongly justified. That’s a stronger standard, a more demanding standard than the constitutional standard. So, even if something is constitutionally permissible, it might be unlawful under the statute.

GAZETTE: What constitutes a significant burden?

TUSHNET: That’s what’s at issue. The statute just says a substantial burden on religious conscience. The statutory question is whether, first of all, for-profit corporations have religious consciences that can be burdened at all. And then second, if they do — for example, they are owned by a very small number of people who do have religious beliefs — if such corporations can be burdened. Is the requirement that they provide this kind of coverage a substantial burden on their conscience?

GAZETTE: Do companies already have a right to violate federal law simply by claiming religious objections?

TUSHNET: These are the first cases raising significant questions about for-profit corporations. There are some cases dealing with churches that have the corporate form, and they do have the right to assert religious [objections].

GAZETTE: Is this an opportunity for the court to expand the “rights” of corporations first recognized in the 2010 Citizens United decision?

TUSHNET: In some sense, yes. The corporations are arguing that, just as in Citizens United, they are persons with constitutional and statutory rights. It’s always been true that corporations have certain kind of rights, but there’s always a question of which rights they have. This would provide the court an opportunity to describe in more detail the kinds of rights corporations have.

GAZETTE: What are the arguments the court is likely to hear from both sides?

GAZETTE: Does the refusal to provide access to birth control violate the civil rights of affected employees?

GAZETTE: In the Hobby Lobby case, there appears to be some question about whether the company has adequately demonstrated that its refusal is entirely religiously based. What is the standard for what constitutes true religious objection versus, say, a personal distaste or political objection?

TUSHNET: The constitutional standard is that the objection has to be sincere. That is, when you say you have a religious objection, you have to be sincere in saying that. And the courts are rather generous in finding that objections are sincere because they don’t really like to try to go inside the heads of people who are saying something, even if they may have a financial interest in saying so as well. It’s a pretty low standard.

GAZETTE: If the court rules against the Obama administration, what are the potential repercussions for the Affordable Care Act?

TUSHNET: A lot will depend on how the ruling is formulated. If the ruling is confined to for-profit corporations that are privately held with a very small number of shareholders, it probably would not have that much impact. Hobby Lobby happens to be a really big corporation with a really small number of shareholders, but I think that’s unusual. My impression is, in the other case, it’s a much smaller operation. If the judges say all for-profit corporations are entitled to make this claim, it could have a much more substantial effect. One of the peculiarities of the situation is that … when you seek this exemption, you simultaneously are invoking your right of religious conscience, and doing something that has a financial benefit to you. If you have a broad ruling, lots of people would have an incentive financially to make this kind of claim, and that would force the courts to examine questions of sincerity that they’re not really happy about examining.

GAZETTE: Could the cases open up a Pandora’s box of future challenges to all sorts of things?

TUSHNET: What would happen then is that the standard would be: Is there a substantial burden on religious conscience, that is not adequately justified, in the employee’s interest? If the court says, in the contraceptive case, there’s a substantial burden and it’s not adequately justified, that doesn’t preclude later courts from saying that although [for example] Christian Scientists might have an objection to providing insurance for any medical treatment and that might burden their conscience, the interests of their employees in having access to medical care is a substantial justification. And my bet is that that’s what would happen were Christian Scientists to make that claim. My guess is that if the court rules in favor of the challengers here, the courts will be reluctant to expand the decision.