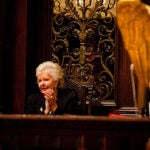 The death toll in the Philippines, reported by the Philippine government, is now estimated at about 2,500 people. Hundreds of thousands of residents are displaced and millions are still without food or water after Typhoon Haiyan made landfall on six Philippine islands on Nov. 8.

Due to the damaged infrastructure and debris, aid has been slow to reach those in need, particularly in the hardest hit city of Tacloban.

Herman “Dutch” Leonard, the George F. Baker Jr. Professor of Public Management, talks about relief efforts in the Philippines and the challenges facing those trying to help.

QUESTION: It has been [five] days since the typhoon ravaged the Philippines. What are the most significant challenges faced by government authorities and relief crews as they try to coordinate assistance?

LEONARD: As is common in massive disasters like Typhoon Haiyan, the most pressing problem is communications and transport within the affected region. Communications, because it is vital to know where help is most needed. Transport, because enormous volumes of rescue workers and equipment and relief aid need to be moved quickly to survivors.

Compounding the challenge, the typhoon will simultaneously have created critical and urgent needs, and at the same time have degraded the region’s capacity for communications and transport. The deficit that is thus created — the yawning gap between what is needed and what is available — is heartbreaking to witness.

QUESTION: Could authorities have done a more effective job preparing for this disaster? What should they have done?

LEONARD: Catastrophes of this sort result from a collision between enormous natural forces and human values — human beings and the communities and social fabric and physical assets they have constructed. In the aftermath, it is always clear that more could have been done to reduce the damaging impact of the storm. We may not be able to change the storm itself, but we can change what we have put in harm’s way in the face of the storm. In particular, we could be better about not allowing dense agglomerations of people and houses in low-lying areas that are subject to storm surge and flooding. But, in practice, this is very difficult to do. Most days are good days, and on good days the open low-lying land looks very attractive, and people who are struggling for day-to-day survival prove willing to run the risk of living in flood-prone areas.

QUESTION: What can and should the United States and U.S.-based agencies be doing now to help?

LEONARD: Sadly, for the most part, given the distances involved and the remote nature of the damaged areas and the shattering of transport and other infrastructure, the likelihood that much can be done in the way of rescuing remaining trapped survivors is low. While there are always a few miraculous rescues days after an event like this, the chances of survival for seriously injured survivors decline rapidly after the first few hours, and outside help is generally not available in time. This is one reason why the true “first responders” are the survivors themselves and the immediate bystanders.

The implication is that the role for external aid agencies and providers is to help stabilize the situation and then provide materials that allow the rebuilding of structures (both physical structures and social and community institutions). In the short run, this means providing ways of rapidly assessing the (widely varying) levels of destruction in different areas, and then moving relief aid to where it can be most valuable.

One critically important asset in circumstances like these is helicopter airlift. There are urgent needs to move people and materiel, and with roads, bridges, airports, and rail transport severely damaged, helicopters are a godsend.

The other vitally important asset is the ability to systematically survey and assess damage and then rapidly to develop plans for addressing the most urgent needs. The “Incident Management System” — a formalized organizational structure for responding to emergencies that is widely practiced in the U.S. and elsewhere — turns out to be a very useful organizational structure for developing and executing adaptive plans.

QUESTION: What are the most important lessons learned from this disaster?

LEONARD: It is too early to tell what specific lessons will emerge from this event — but there is always something that is surprising, and in surprise there is learning. Our research will continue to focus on what is unexpectedly good — and on what turned out to be unexpectedly difficult — so that we can provide better general advice to others facing large storms and other disasters in the future. This is one important act that we undertake in memory of those who perished or were injured or who lost friends and loved ones in this event — so that their great suffering will not have been in vain.