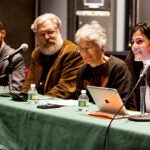 American philanthropists and entrepreneurs Eli and Edythe Broad announced on Thursday they are investing an additional $100 million into the Broad Institute of Harvard and MIT to launch a new decade of transformative work to harness recent biomedical discoveries to benefit patients.

This gift brings their total contributions to the institute to $700 million since its founding nearly a decade ago — and makes the Broads the second-largest donors ever to a university, hospital, or research institute for biomedical research.

“When we made our first investment to create the Broad Institute, we shared Eric Lander’s vision that discoveries in biomedical research held the key to beating devastating disease and improving people’s lives,” said Eli Broad, founder of The Broad Foundations. “As the Broad Institute nears its 10th anniversary, it has already made transformative discoveries, building on the successes of the Human Genome Project. Our latest investment is intended to catalyze the next decade of innovation and discovery. Our goal is to enable the Broad Institute community to continue to take bold risks, bring together the brightest minds in the field, and pursue game-changing breakthroughs that are needed to make a difference in science and medicine.”

“With their generous gift, the Broads are making possible an entirely new approach for understanding, diagnosing, and treating human disease,” said Drew Faust, president of Harvard University. “We are grateful for their continued support and for our extraordinary partnership with the Broad Institute.”

The Broad Institute was founded in 2003 as an unprecedented model of research collaboration, bringing together scientists from across the Harvard University and Massachusetts Institute of Technology communities, including the Harvard-affiliated teaching hospitals, and from diverse disciplines including biology, medicine, chemistry, and computer science.

“There is no place like the Broad Institute,” said Broad. “The legacy of collaboration across disciplines coupled with transformative talent, technology, and resources will endure far beyond the next decade. Edye and I can’t wait to see what they will tackle next.”

Through collaborations that span the Broad Institute’s partner institutions and other organizations across the globe, the Broad has pioneered scientific advances aimed at developing a deeper, more precise understanding of disease biology and opening up entirely new paradigms for diagnosis and treatment. These approaches include:

“Eli and Edye recognized before many others did the power of genomic information to revolutionize our understanding of human biology and disease,” said Lander, founding director of the Broad Institute. “Their foresight and generosity launched the institute. Their new gift will help us to use our discoveries to transform how we attack devastating disease and improve patients’ lives.”

Over the past decade, Broad researchers have led pioneering work in human biology that forms the cornerstone of its next decade of research. This includes the development and application of state-of-the-art genomic methods that have propelled the discovery of hundreds of genes at play in major human diseases, including common diseases such as type 2 diabetes and early-onset heart disease; psychiatric diseases such as autism and schizophrenia; autoimmune diseases such as inflammatory bowel disease and rheumatoid arthritis; infectious diseases such as malaria and tuberculosis; dozens of cancers; and many others.

In the next decade, Broad researchers will apply this knowledge to develop therapeutic roadmaps for a variety of human diseases, enabling a new world of more precise and effective treatment options for patients.

“Eli and Edye are true visionaries, and I am grateful for their support of such a critical, forward-looking effort,” said Rafael Reif, president of MIT. “The Broad Institute, the scientific community as well as society as a whole will reap the benefits of their generosity and vision for generations to come.”

The Broads’ $100 million gift is their fourth gift to the Broad Institute. In 2004, an initial $100 million investment launched the institute, and was followed a year later by a second $100 million. In 2008, the Broads pledged $400 million to endow and establish the Broad Institute as an independent nonprofit scientific research institution, making it a permanent part of the biomedical landscape. Their combined contributions make them the second-largest donors to a single organization for biomedical research

“I’m profoundly grateful to Eli and Edye for their partnership and support,” said Lander. “Their extraordinary philanthropy is enabling innovation in science and medicine that will directly impact human health for generations to come.”