A poet’s own epitaphs 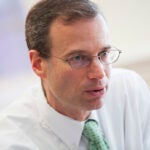 In late August, the world lost poet Seamus Heaney, who died in his native Ireland at age 74. Harvard also lost this modest, tender, ebullient man who first arrived to teach in 1979, setting off a series of academic appointments that officially ended in 2006.

In the midst of them, Heaney won the 1995 Nobel Prize in Literature.

His death was marked Thursday by a service of remembrances and readings sponsored by the Department of English. Heaney’s appointments were there, first as a visiting professor, then as the Boylston Professor of Rhetoric and Oratory (1985-1997), and then as the Ralph Waldo Emerson Poet in Residence (1998-2006).

It was a chilly, rainy late afternoon — Irish weather — and the pews at Memorial Church were nearly full. Present were those “who loved Seamus on and off the page,” said Peter Sacks, Harvard’s John P. Marquand Professor of English.

The eulogies were many, but nearly all were delivered by Heaney himself, in verse read by admirers who delivered the word-borne tremor, surprise, and power for which his work is known. He is “the person we loved,” said Sacks, “and love.”

“His poetry and his friendship were his greatest gifts,” said English Professor Nicholas Watson, who offered the memorial’s welcoming remarks.

In the audience were the poet’s widow, Marie, along with the three Heaney children, Christopher, Michael, and Catherine Ann.

The first poem read was “The Master,” which hints at Heaney’s modesty, hard work, and the prosaic tools he used to craft his timeless words:

a page at a time, and it was nothing
Arcane, just the old rules
We all had inscribed on our slates.

Last read was a selection from “Lightenings,” Heaney’s oblique elegy for his own father, whose death was both plain and powerful. The poem reflects the earthbound view of a poet who grew up proudly next to a farmyard, where life and death make their routine and resonant passages. “And after the commanded journey, what?” the poem asks. “Just old truth dawning: there is no next-time-round.”

Close friend Helen Vendler, Harvard’s A. Kingsley Porter University Professor, read that last poem, and the one before it, too, a selection from “Clearances,” the last of a series of elegies Heaney wrote for his mother. “He discovered,” Vendler said, that “an absence can be brighter than a presence.”

Deep planted and long gone, my coeval
Chestnut from a jam jar in a hole,
Its heft and hush become a bright nowhere,
A soul ramifying and forever
Silent, beyond silence listened for.

Heaney hewed to the reality of the deaths around him, and absorbed them into his poetry. But at the memorial service, the joyful man was present too — the one who climbed trees in Harvard Yard, who stood on chairs to recite poetry, who reveled in friends, and who, of an evening, would slip outside his lodgings at Adams House to enjoy a good cigar in solitude.

“Mourning does not easily become this poetry,” Watson told those assembled. “You will find it impossible not to rejoice.”

Starting in 1981, Heaney stayed at Adams as an associate during his Harvard teaching visits, where he happily made house in a plain and monkish room. “I think he liked the spare simplicity,” said former House Master Robert Kiely, whose remembrances of Heaney provided the memorial’s sole extended narrative. Such rooms, he said, “were only a step up from the founding fathers” of Puritan Harvard.

When Heaney’s wife visited, she would bring flowers for the single table. Kiely said the spare room “made them feel like newlyweds.”

Death and loss and transient life and what he called the ecstasy of childhood’s “illiterate solitude” all played a role in Heaney’s verse. Marriage did too, as a way to revive in poetry “the discarded myth of love lasting forever,” said Elaine Scarry, the Walter M. Cabot Professor of Aesthetics and General Theory of Value. In one of her courses, she devotes a week to what the culture at large might see as counterintuitive: “love poems to a married woman” from her husband.

She read “The Clothes Shrine,” a poem to the “whole new sweetness” of early marriage. It is also a testament to Heaney’s lifelong genius for seeing the moving in the mundane.

Poet Jorie Graham, Harvard’s present-day Boylston Professor of Oratory and Rhetoric, touched on the same celebration of married love. She read “The Underground.” “Honeymooning,” one line reads, “mooning around, late for the Proms.” The poem begins:

There we were in the vaulted tunnel running,
You in your going-away coat speeding ahead
And me, me then like a fleet god gaining
Upon you before you turned to a reed

The readings included a ninth century poem in Old Irish and a selection from “Beowulf” in Old English, complete in both cases with Heaney’s translations. Hearing the ancient languages the poet was tuned to was like hearing the magic of lost music.

But it was Kiely’s Adams House reminiscences that brought the gathered crowd back to much of the reason why there was a memorial service at Harvard: because Heaney loved the place, for both the solitude and the society it gave him.

Heaney loved words, wordplay, play, and music. So he would have loved the piano, violin, and voice pieces interspersed with the readings. Included was the premiere of “Kinship, IV,” written for the occasion by pianist, conductor, and composer Matthew Aucoin ’12 and sung by soprano Sol Kim-Bentley, an English Department faculty assistant. (In two other musical interludes, Keir GoGwilt ’13 was the violinist.)

Heaney loved telling a good story. Kiely remembered this one:

One night the poet was driving through the Irish countryside when a patrolman stopped him for speeding. Heaney fumbled for his license and could not find it. Impatient, the policeman shone his flashlight inside the car.

“Do you have any way of proving who you are?”

On the front seat, Heaney found an envelope addressed to him and handed it over. The patrolman looked at it and asked, “The poet?”

He got a nod. “Drive on,” said the patrolman.

“I love that story,” said Kiely. “Only in Ireland.”