When things changed for women 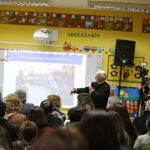 In Chile, a head start

After Gail Collins, now a New York Times columnist, was named the paper’s first female editorial page editor in 2001, she had a little ritual while heading into editorial board meetings. As she walked into the long, old-fashioned room, she’d look up at the paintings on the walls, and home in on the portraits of some of her predecessors who “had editorialized against women voting.”

“I used to like having them up there, and I would come in in the mornings sometimes and say ‘Hi, guys. I’ve got your job.’”

With her trademark wit firmly intact, Collins spoke at the Radcliffe Institute for Advanced Study on Tuesday, delivering the Schlesinger Library’s annual Maurine and Robert Rothschild Lecture. She based her talk on her 2009 book, “When Everything Changed: The Amazing Journey of American Women From 1960 to the Present,” which charts one of the nation’s most radical and rapid cultural shifts.

“When I was in college in the late ’60s in Milwaukee, we could not leave the dorm in slacks unless we were going bowling. So much bowling was signed out for … you would have thought there was a bowling alley on every corner.” — Gail Collins

To put things in perspective and to encourage her audience to remember just how far women have come, and how quickly, Collins offered a series of searing anecdotes involving pants, including the tale of the young woman who in 1960 “was evicted from traffic court for attempting to pay a parking ticket while wearing slacks,” and the saga of a woman working for the Postal Service who could travel to her job in the winter wearing pants, but had to “change into a skirt” before sorting the mail.

Collins even had her own trouser tale.

“When I was in college in the late ’60s in Milwaukee, we could not leave the dorm in slacks unless we were going bowling. So much bowling was signed out for … you would have thought there was a bowling alley on every corner.”

And if you tried to order a drink at a Boston hotel bar alone, said Collins, you might be escorted, like Betty Friedan, a young writer on assignment, to the ladies bathroom of the Ritz Carlton to finish your cocktail. It was simply assumed that a single woman at a bar must be a prostitute. Collins said that, for Friedan, the drink episode was likely “one of the last propelling moves that sent her over the edge into the movement heroine that she became.”

That basic vision of a woman’s place in society had been that way for centuries. It simply was understood that men were there “to run the public world … and women were there to run the household.”

Then, almost overnight, lots changed. The pivotal year 1963 saw the release of the report on the status of women commissioned by President John F. Kennedy that contained recommendations for ways to improve women’s legal, social, and economic conditions, and the publication of Friedan’s groundbreaking “The Feminine Mystique.” But above all, it was the Civil Rights Movement, said Collins, “and all the other movements followed in its wake,” that transformed the country.

Once the nation “digested the fact that it had been so extraordinarily unjust to such a large chunk of its population for such a prolonged period of time … the country became very sensitive to issues of fairness.”

In an interview before the lecture, Collins reflected on a range of topics, from her work at The Times, to the craft of writing, to the political situation in Washington, which she called “the worst I’ve ever seen.” (Only in the period before the Civil War, she said, was the nation more politically polarized than today.)

Asked how she maintains her sense of humor and her energy when the country is in such a dysfunctional stalemate, Collins said she stays true to a pledge she made to herself many years ago.

“I always swore that my goal was going to be, once I was a columnist and I had gotten used to doing it, that I was not going to write a column that was going to make people just want to bang their heads against the wall … that I wanted it to make them feel engaged and not just hysterically alienated and angry. So for the most part, that is still what I try to do. You just kind of want to keep people in it.”

During introductory remarks, Radcliffe Dean Lizabeth Cohen echoed that sentiment, saying that Collins “gives us brilliant commentary with humor that never dulls the sharp-edged sword, but makes it possible to still face the day ahead.”

And just where did Collins develop her finely tuned, trademark wit? It was during an early job in journalism covering the Connecticut legislature. Trying to get people to read her stories about the state’s inner workings, and issues such as the guaranteed tax base, was “just impossible,” said Collins. “Really, humor was the only hope. … I just got used to the idea that the best way to bring people in when you were writing about stuff like politics and government issues was to try to make it funny.”

Even though she broke the gender barrier at The Times’ editorial page, Collins said she never felt like she was leading the way for women. That, she said, happened just before her time.

“The whole thing about being trailblazers and suffering because of your sex and having to overcome things, it never happened to me. I got all the advantages of being a woman and none of the disadvantages because the people who were one second ahead of me historically were the ones who filed all the suits.”

But Collins did notice a charged atmosphere at the paper.

“I could just tell that women were really happy when I got to be editorial page editor. It wasn’t because of me in particular. They just really liked the idea that there would be a woman in that job.”

Collins thinks the great challenge facing the nation today doesn’t break down along gender lines, but instead is about economic equality.

One audience member, concerned that women are still on the fringes of many American boardrooms today, asked Collins how women can try to advance their careers in male-dominated fields. Collins said the best thing women can do is support one another.

“You help other women. You support other women in your group. You work together.”