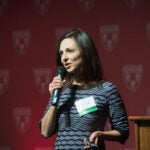 Women in the law

In the spring, the U.S. Supreme Court saved a trio of critical rulings involving same-sex marriage, voting rights, and affirmative action for the final days of its term, and the repercussions from those decisions are still playing out.

During a luncheon discussion Thursday at Harvard Law School (HLS) moderated by Dean Martha Minow, four of the School’s constitutional experts deconstructed the decisions and offered the student crowd their thoughts on those rulings.

“It was a good term for the Red Sox, a bad term for the Yankees, and a so-so term for gay marriage,” said Kirkland & Ellis Professor of Law Michael Klarman, referring (in addition to baseball’s summer) to both the Defense of Marriage Act (DOMA) that was overturned by the court, thereby allowing same-sex married couples access to federal benefits, and the court’s decision to hand the California case banning same-sex marriage back to the U.S. Court of Appeals for further ruling.

“I think the majority is ducking,” said Klarman of the California case in which the court decided that the proponents of a ban on same-sex marriage, known as Proposition 8, did not have the legal right to defend the law in federal courts. “I think the reason why they are ducking is because they are concerned about the possible backlash effect of a decision imposing same-sex marriage on the states.”

The California decision “isn’t a huge loss” for the gay rights movement, said Klarman, the author of “From the Closet to the Altar: Courts, Backlash, and the Struggle for Same-Sex Marriage.” He cited national polls that say a majority of Americans now consider same-sex marriage inevitable, and he referenced the work of prediction guru Nate Silver, whose recent statistical model suggests that in three years 31 states will have a voting majority in support of gay marriage. By 2020, that voting majority will be the norm in every state except for six in the Deep South, according to Silver.

“It’s not a big victory for the gay rights movement that the court ducked,” Klarman said, “but I don’t think it’s a big defeat either. Gay marriage is inevitable. I think people are recognizing that.”

While Beneficial Professor of Law Charles Fried said he had always believed the court’s decisions were “determined by the force of legal argument,” he thought the rulings in both the DOMA and Proposition 8 cases were driven instead by the nation’s shifting stance on gay marriage.

Fried described Associate Justice Anthony M. Kennedy’s majority opinion in the DOMA ruling as a case of “the more you explain it, the less I understand it.”

“It had this absolute, full-throated aria about dignity, and the dignity of gay couples … but he did not emit an opinion which unqualifiedly, unreservedly would mean that to preclude gay marriage anywhere, in any jurisdiction, would be unconstitutional. He had this complicated view about how it was a denial of dignity, which the state has conferred, suggesting that if the state has not conferred this dignity, the dignity has not been denied.”

The court’s move to send the Proposition 8 case back to the lower courts shocked Fried.

“I would have thought that the [argument] for saying that case was properly there, and there was jurisdiction, was stronger in Prop 8 than in DOMA. However, it went the other way, and the two cases lined up exactly as public opinion would have wanted.”

While Kennedy’s DOMA opinion was “incredibly progressive,” it was also conservative in an important way, said Justin Driver, Sullivan & Cromwell Visiting Assistant Professor of Law for the fall term. “It elevates marriage to the pinnacle of society … at a time when marriage is being moved away from by many citizens. People of all different races are deciding that marriage is effectively not for them.”

In reviewing Fisher v. the University of Texas at Austin, the case involving the constitutionality of race in university admissions, Tomiko Brown-Nagin, the Daniel P.S. Paul Professor of Constitutional Law, said the decision to have a federal court of appeals take a harder look at affirmative-action policies in public colleges and universities puts those institutions “on the defensive as never before.”

That the court agreed to hear the case surprised many observers and seemed to signal its readiness to narrow or even overrule previous decisions upholding affirmative-action programs in university admissions, said Brown-Nagin. Its subsequent ruling requiring the lower courts to use a tougher review process for admissions programs indicates “the court is suggesting, subtly, a preference for the race-neutral alternatives and its disfavor of explicitly race-conscious, holistic review.”

“There was no … radical doctrinal change. But nevertheless, the court is nudging the law in a different direction,” said Brown-Nagin. The long-term impact, she added, is a “whittling away of affirmative action in higher education.”

The court also invalidated a key section of the Voting Rights Act of 1965. In discussing that case, Klarman called the original law one of the “crown jewels of the Civil Rights Movement.” It was enacted, he said, to counter massive disenfranchisement of African-Americans in the South.

Klarman said the complicated issue in the recent case was preclearance provisions — the geographic formula that determined which jurisdictions required approval from the U.S. Justice Department or a federal court before they could change their voting laws. The preclearance formula, he said, was based on voting numbers from the 1964 presidential election, and was aimed at jurisdictions that had a voting literacy test and a voter turnout of less than 50 percent.

“Preclearance was an extraordinary remedy that Congress used in 1965 to address this extraordinary problem of almost universal black disenfranchisement in the rural, Deep South,” he said.

The act was renewed in 1970, 1975, 1982, and in 2006, but the coverage formula never changed. With its 5–4 decision, the court was saying “times have changed,” said Klarman. The court was sending the message that “if Congress wants to continue with this extra imposition on what it says is state sovereignty … you can’t do it based on a rule that you adopted almost 50 years ago. You have to come up with a geographic coverage formula that’s not geared to voter turnout in 1964. It has to be geared to some sort of problem today.”