The queen and the sculptor 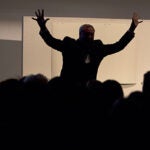 When all turn right, go left

For those of us aging fast, it is nice to know that one the most beautiful faces in the world is more than 3,300 years old.

That face is on the bust of Queen Nefertiti, the wife of Pharaoh Akhenaten, whose reign in Egypt spanned 1353–1336 BCE. This famous artifact, 44 pounds and life-size, has a layer of painted gypsum stucco over a full-featured limestone core. It was discovered a century ago in the ruins of an ancient artist’s studio in Amarna, south of Cairo. First made public in 1924, it fast became an icon of feminine beauty.

A slender, smooth neck gives way to skin the color of golden sand. Then come full, red lips; a dramatic, sloping nose; almond eyes; and arching, dark eyebrows. Above the face is a colorful, back-sweeping, cylindrical crown. It’s a lot for the eye to take in, especially since the work was likely just an artist’s model, and never intended for display.

Found scattered through the same studio were 22 plaster casts of faces. Some depict older women with every wrinkle and sag, an artistic anomaly in a culture that stylized women as slender and beautiful. (Nefertiti’s image beneath the stucco, recent CT scans show, was more realistic: a woman with lesser cheekbones, wrinkled cheeks, and a bump on the nose.)

But the world sees just the surface. The face “is part of our culture,” said French Egyptologist Alain Zivie in a Harvard lecture last Thursday, “like a picture of Che Guevara or Einstein or the Mona Lisa in Paris.”

The discovery of the bust in Amarna in 1912 is one of archaeology’s signature moments. A famous photograph depicts German Egyptologist Ludwig Borchardt getting a first look at the life-size bust. “Suddenly we had the most alive Egyptian artwork in our hands,” he wrote in his diary. “You cannot describe it with words. You can only see it.” (He kept the bust in his Berlin home for 11 years before moving it to Berlin’s Neues Museum.)

Yet who created the famous bust, and sculpted and painted the famous face? It was Thutmose, who in his day styled himself “the king’s favorite and master of works.”

The lecture, “Discovering the Egyptian Queen Nefertiti’s Artist,” reminded the audience of Pharaoh Akhenaten’s official court sculptor, a man whom Zivie has styled “the Michelangelo of ancient Egypt.” The talk was a testament to Egyptology’s durable drawing power (or perhaps Nefertiti’s). Fong Auditorium was full, from the front row to the top tier. (Co-sponsoring the event were the Semitic Museum and Harvard’s Standing Committee on Archaeology.)

The lecture was also a testament to Zivie’s current academic interest: to prove that the Thutmose of the studio in Amarna is the same as the Thutmose whose tomb he discovered farther north in Saqqara. Zivie was nearly 33 minutes into his 51-minute talk before he mentioned Nefertiti. “Of course, we come to the lady, the icon,” he said, teasing the audience first with a picture of the bust from behind.

It was Zivie who discovered Thutmose’s presumptive tomb in 1996 while helping to excavate what initially were believed to be just subterranean galleries for mummified cats and dogs. (Egyptian animal cults had flourished in Saqqara.) Tombs, he said, “are sometimes small holes,” and may be hard to identify for what they are. Thutmose’s was small and it stank, said Zivie, and was “not very attractive at first.”

The area of the Thutmose tomb is called Bubasteion, which is now less about mummified pets (thought to number in the millions) and “more and more a New Kingdom necropolis,” said Zivie, the director of the French Archaeological Mission of the Bubasteion and this year a visiting scholar at Harvard’s Semitic Museum.

Zivie made his case for the historical Thutmose, a man he called “an exceptional artist who made his own tomb.” He showed his audience the inside. To the left are three preserved painted walls that form a sort of autobiographical triptych. “It’s a lifetime passing by,” he said of the pictures, which include Thutmose, his wife, and children.

Zivie showed one slide that was a detail of “the wife of the master, painted by himself,” which “is so moving.” So was the depiction of the artist and his wife, in full face and figure, painted together on a double coffin. “It’s moving because we know it is Thutmose himself,” said Zivie. “He painted himself dead.”

Central to the triptych is what Zivie called a metaphor of the artist’s life, a small horizontal palette of many colors, similar to the one of ivory found in the studio in Amarna. It was with paint, he said, that the master gave to sculptures “the final touch of life.”

Is it truly the tomb of Thutmose, the artist whose name hovers behind Nefertiti’s memorable face? At lecture’s end, Zivie admitted “the story is unfinished.” The jury of scholars is still out, later agreed Peter Der Manuelian, Harvard’s Phillip J. King Professor of Egyptology and director of the Semitic Museum. “More evidence would be nice, but the contemporaneity works.”

From the audience, Egyptologist Jacquelyn Williamson said during a lively question-and-answer period that, “You have me 98 percent convinced.” Williamson is a Harvard Divinity School affiliate and a specialist in the Amarna Period, when Nefertiti lived. She is a visiting lecturer in Women’s Studies and Near Eastern Studies and in spring will teach a course on gender and sexuality in cultures pre-dating the Bible.

Zivie made his last trip to the Saqqara site last November. It was cut short by Egypt’s political turmoil. But he made the audience an offer. “You are welcome when you pass [by] in Egypt,” said Zivie of the artist’s tomb, “to see with your own eyes.”