The case for blockbusters 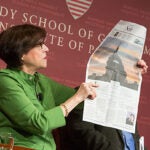 Seeds of a shutdown

They are the perennial complaints of pop-culture connoisseurs: Why are so many Hollywood movies lowest-common-denominator mash-ups of comic book heroes and pricey special effects? Why do radio stations only play the “top” 40 songs, half of which seem to involve Taylor Swift or Jay-Z? And why do some European soccer clubs such as Manchester United and Real Madrid tend to dominate year after year?

The answer, says Harvard Business School (HBS) Professor Anita Elberse, is a strategy by successful executives across the entertainment world to place high-stakes bets on a handful of high-priced projects with top-tier talent — the blockbusters — rather than distributing resources over an array of lower-cost vehicles.

The “idea of taking this huge risk is actually the best way to go and, in fact, is the safest approach,” Elberse, the Lincoln Filene Professor of Business Administration, said in a recent interview. “For many people, this is counterintuitive. They say, ‘You want to take as many shots at goal and hope one goes in.’ Actually no: You want to put yourself in the best position, really swing for the fences, and go all out in that one shot you’re taking.”

Elberse’s debut book, “Blockbusters: Hit-Making, Risk-Taking, and the Big Business of Entertainment,” due out Oct. 15, builds on her pioneering research over the last decade into why some businesses and star-driven brands seem to thrive in the highly speculative and competitive marketplaces of film, music, sports, book publishing, and even nightclubs.

Through her work developing HBS case studies, Elberse had rare, close-up looks at the operations and decision-making philosophies of top executives in those fields, including Sir Alex Ferguson, the recently retired, longtime manager of Manchester United; Warner Bros. studio head Alan Horn; and Troy Carter, the manager of musician-performer Lady Gaga. All offered closely held information about why they do what they do, insights rarely shared with the public.

Elberse said the resurgence of Netflix from the success of “House of Cards” is the best example of her findings. “The moment they really broke through … was when they said … ‘We’re going to produce a $100 million show.’ This was a bet HBO walked away from. The sheer fact that Netflix is this nontelevision entity producing television, making a blockbuster bet on a handful of shows in a given year now in the hopes of making their business model work, is almost the best proof you could have that the blockbuster strategy works,” she said.

Because most entertainment businesses rely primarily on the unpredictable tastes of consumers, inevitably what looks like a surefire winner on paper sometimes turns out to be a dud. But those big failures are not necessarily a reason to scale back.

“You want to pick the right projects to bet on, and that’s still an inexact science. You need to spend it on the right things, but spending it on the right things costs money,” Elberse said. “In fact, it’s the very uncertainty that exists in the marketplace that makes this such an attractive strategy — because no one knows exactly what’s going to hit.

Time and again, Elberse found, companies that go “all-in” on a few choice projects with A-list stars and blockbuster potential tend to fare better than those that are more risk-averse.

“It seems really sensible, but if you look at the results, it usually backfires and makes business results even worse,” said Elberse of taking a cautious approach. But spending less means getting less in critical areas that ultimately affect the bottom line.

That dynamic also holds true in major sports. Elberse studied Real Madrid’s assembly of a premier soccer team by acquiring a roster of superstar players such Cristiano Ronaldo and David Beckham — which is quite different from clubs that can’t afford to spend millions and therefore must build talent from within.

While a team of all-stars is no guarantee of success, and can sometimes even inhibit team chemistry, Elberse said that status gives clubs “tremendous marketing advantages.”

“I see it almost as an assurance against losses,” she said. “Because the on-the-field results sometimes are just based on luck or what happens in that last minute or an injury. But betting on stars … brings you sustainability in the long run. If you manage that well and if you build an infrastructure around it, it sets the club up for a much longer time, [where] they can afford these types of investments.”

One outgrowth of the blockbuster strategy is that it gives creative talent more leverage over businesses, which puts pressure on firms to up the ante. Savvy headliners, such as Lady Gaga or NBA star LeBron James, recognize the growing influence their names have in driving sales and are now demanding — and getting — a piece of the action from sponsors, not just an endorsement check.

“It’s not a coincidence that it’s the biggest stars with the most star power who are making those moves,” she said, “because they realize they’re bringing a lot of value to these partnerships. If you already have sufficient wealth, then you can afford to take that risk on yourself.”

Contrary to the popular notion that digital technology will democratize the market for musicians, filmmakers, and authors, giving everyone an equal shot at being recognized, Elberse said in reality, that’s not likely because of the increasingly high cost to break through the clutter.

“In fact, digital technology will probably create bigger blockbusters and bigger superstars,” she said. “In many ways, everyone has a shot, but only so many people will win, and it tends to be the ones that have the biggest resources behind them. Reaching the top is probably going to be even harder.”