Seeds of a shutdown 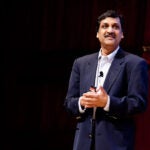 On the frontiers of learning

Speaking at an Institute of Politics (IOP) forum, Time magazine columnist Joe Klein connected the shutdown of the federal government to a toxic political culture created by Baby Boomers.

“My generation has reached its sell-by date,” Klein said Wednesday at Harvard Kennedy School. “The way to get past this is for those who are millennials to get past us.”

The author of the Bill Clinton-inspired novel “Primary Colors” and a writer for Time’s Swampland blog, Klein, 67, is a fellow at the Joan Shorenstein Center on the Press, Politics and Public Policy. He spent his early career as a writer for Boston’s Real Paper, a counterculture weekly. Decades later, he sees a harmful legacy in Boomer attempts to transform culture and politics in the 1960s and ’70s.

Fractured coalitions were united into conservatives and liberals, but the middle was left unrepresented, he said. Gerrymandered redistricting and the 1965 Voting Rights Act gave blacks the power they had been promised after the Civil War, but deprived lawmakers of the ability to respond to districts with broad ideological and social needs. Finally, Boomers bred a media cynicism that now passes as insight, and extremists on both sides of the ideological spectrum have undercut civility in debate.

“This is a consequence of my Baby Boom generation,” Klein said. “We came into political consequence by distrusting authority. The reaction to those of us involved in the antiwar and Civil Rights Movement of the 1960s was to use those same confrontational tactics we now see in the Tea Party.”

Klein is at work on a book exploring the leadership skills of Afghanistan and Iraq war veterans, a project he called “the greatest joy in my life” in an interview following the forum.

At the heart of the stalemate is House Republicans’ demand for concessions on President Obama’s Affordable Care Act in exchange for action on federal spending. Linda J. Bilmes, the Daniel Patrick Moynihan Senior Lecturer in Public Policy, veered away from cultural interpretation and pointed to a badly designed appropriations process as the root of the problem.

Instead, “Congress lurches from crisis to crisis,” she said, noting that heading into the shutdown no spending bills had been passed.

Maralee Schwartz, a longtime Washington Post political reporter and now supervisor of the Institute of Politics’ Washington summer internship program, moderated the discussion. She covered the 1995 federal shutdown, and recalled how Sen. Robert Dole brokered an agreement with House Speaker Newt Gingrich to reopen the government, even though he was then preparing for his presidential campaign. She wondered who the “grown-ups” would be today.

The IOP had planned to welcome U.S. Secretary of Agriculture Tom Vilsack on Wednesday, but the shutdown forced him to remain in Washington, prompting the institute to organize a panel on the issue, according to Director Trey Grayson ’94.