Lessons in an unappealing law 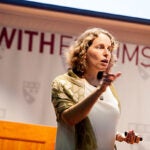 Can a room full of Harvard professors and scholars from a range of disciplines find merit in the reasoning underlying a 1927 Supreme Court decision that upheld the forced sterilization of “mental defectives?”

Harvard Law School (HLS) Professor Noah Feldman engaged a master class at the Mahindra Humanities Center Wednesday night in Socratic prodding to dig beneath the ruling’s objectionable findings. Feldman led art history professors, psychiatrists, law students, and humanities scholars through a thicket of conundrums to peel away their subjectivity in exchange for the rigor of appellate logic.

The case was brought by Carrie Buck, a “feeble-minded woman” committed to Virginia’s state colony and sterilized under court orders. Buck was intelligent enough to write clear letters. Her mother, also deemed feeble-minded by authorities, had similar reading and writing abilities, and Buck’s 9-month-old child, who was deemed to be mentally unfit, went on to be an honor student.

But the deck was stacked against Buck. Her lawyer was a founding member of a eugenics association handpicked by the head of the hospital where Buck resided. The lower court decision was affirmed 8-1, with only the lone Catholic member of the court, Justice Pierce Butler, dissenting. And in upholding the Virginia statute that permitted compulsory sterilization, Justice Oliver Wendell Holmes Jr. famously wrote: “Three generations of imbeciles are enough.”

Holmes, Feldman said, was “one of the greatest justices of all time,” but Buck’s was “not a case about which to be terribly proud.”

Despite widespread criticism, Buck v. Bell has never been overturned, but reasoned coolly by legal scholars and angrily by humanitarians. As third-year law student Lina Kaisey said, “Lawyers in general and Holmes in particular believe we need to comb away the discriminatory, to remove human dimensions from the case.”

Indeed, Feldman pointed out, the facts were not before the Supreme Court, only whether Virginia’s compulsory sterilization statute violated Buck’s 14th Amendment rights to life and liberty without due process.

The only group the law so protected at that time was property owners, said Feldman, who is the Bemis Professor of International Law, a contributing writer for The New York Times Magazine, and a columnist for Bloomberg View. “What are we to make of this?” he asked, noting that Holmes used almost a humorous tone in the decision, “a confidence in his own superiority.”

“Like most people who read the decision, I experienced it as a moral outrage,’’ Feldman said. But in the 1920s, he said, eugenics was considered a progressive cause in the United States. Six years after the decision, Germany took eugenics to a mass scale and only then, Feldman said, did the practice lose favor.

For Holmes, a veteran who had been the first Massachusetts man wounded in the Civil War and had been injured in battle twice more, giving up the right to bear children was secondary to the hardships of conscription. He even called compulsory sterilizations “lesser sacrifices … in order to prevent our being swamped with incompetence.”

Feldman said that hundreds of thousands of people were sterilized under the statute, the reach of which was reduced by subsequent case law. Still, the sterilization law was still cited in Roe v. Wade as a boundary on rights over people’s bodies.

Substantive due process has been a key feature in more recent rulings on abortion, contraception, and gay marriage.

But Feldman noted that studying the text and context of Buck v. Bell offers lessons not just for legal scholars, but for humanists. “It is valuable to get under our moral outrage,” he said.