In Chile, a head start 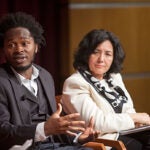 This is the 10th in a series of stories about Harvard’s engagement in Latin America.

COBQUECURA, Chile — “We’ve got to break the horrible cycle of poverty and the huge disparities between the rich and the poor,” said Judith Palfrey, Harvard’s T. Berry Brazelton Professor of Pediatrics, speaking on a sunny afternoon in this coastal town that is still recovering from a massive earthquake and tsunami in 2010.

Palfrey was visiting the area as part of an ongoing Harvard collaboration aimed at boosting economic equality through a comprehensive early education program.

The stakes are sobering. According to the results of a long-term U.S. study published in 1995 by psychologists Betty Hart and Todd Risley, by age 4 the average child from a high-income family had heard 32,000,000 more words than a child from a welfare home. Hart and Risley knew that offering children early exposure to an expanded vocabulary was key. Likewise, UBC has developed a comprehensive language and literacy intervention program for roughly 100 schools in the greater Santiago area.

Supported by the interdisciplinary project Recupera Chile, a coalition of academic, nonprofit, private, and public organizations focused on community-based recovery, UBC is being implemented in the coastal towns of Dichato, Perales, and Cobquecura, all devastated by the quake and tsunami. Recupera Chile is based at Harvard’s David Rockefeller Center for Latin American Studies,

“Many people believe that one of the ways to deal with social inequity and to bring this gap together is to invest heavily in early childhood education,” said Palfrey, who has been closely linked to the UBC project since she visited Chile in 2006, when she worked with DRCLAS colleagues, the Chilean Ministries of Education and Health, and HGSE to launch the program.  “We are convinced that language and early literacy and the ability to engage [with] a book and engage [with] stories, and the process of thinking about stories … these are tools for life. The thinking tool is language.”

On this brisk August afternoon in Cobquecura, several area preschool teachers attended a UBC training session focused on vocabulary. In a classroom flooded with winter sunlight, the participants arranged their chairs in a small semicircle and read “El festín de Augustín” (“Augustin’s birthday”), about a young pudú, a Chilean deer, preparing for a special day. They stopped frequently to discuss a particular word, or to explore the importance of offering children both a definition and the context around a challenging word with various meanings. Instructor Carolina Díaz carefully explained the importance of dividing words into categories depending on their levels of difficulty.

Lilian Narvaez, a professor in the University of Concepcion’s school of education, was also in class. In the future, Un Buen Comienzo officials hope to turn their training efforts over to students from the ed school.

“As education professionals, we know the impact of early childhood education is supported by the evidence,” said Narvaez. “And as teachers of teachers, we know how important it is to be involved in this kind of initiative. We also share the view that if you help children learn step by step, they will never be limited.”

The following day in Dichato, Palfrey discussed the benefits of the UBC program with another group of teachers and administrators. The initiative, she explained, involves teaching students songs and rhyming skills to help them remember words, encouraging them to write as much as possible, and showing them how letters relate to sounds. The work also calls for making books accessible, and making sure parents understand the importance of having their children read at home.

“This literacy program is focusing on language development as a fundamental for education,” said Palfrey.

Camren Gloria Vasquez, a teacher who has worked in a temporary building since her school was destroyed in 2010, urged UBC officials to expand the program as soon as possible.

“I have students in my school who can’t even read,” said Vasquez, who teaches 7- and 8-year-olds. “It’s important that this program reaches all schools.”