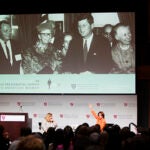 The measure of a woman

Professor explains the mystery and magic of team chemistry

The Boston Red Sox, who last year finished at the bottom of their division, retooled during the offseason, deftly combining a motley crew of free agents, rookies, castoffs from other teams, and battered veterans to rejuvenate the team, a process that surprisingly culminated with a World Series title Wednesday night. Most analysts suggest that the team, which played well for the entire six-month season and through the playoffs, somehow grew to become more than the sum of its parts. To gain some understanding of why these bearded Red Sox succeeded so well, the Gazette spoke with Jeffrey T. Polzer, Harvard Business School’s UPS Foundation Professor of Human Resource Management, about the aspects of team chemistry that separate champions from cellar dwellers in sports, business, and elsewhere.

GAZETTE: What defines group or team chemistry, and what are the key elements to it?

We saw these team spirals with the Red Sox in the past couple of years. When things go well, confidence builds — both self-confidence within individuals and confidence in one another, and that helps players perform even better as a virtuous cycle takes hold.

In baseball, for example, when you gain confidence, it might help you relax at the plate or deliver a key pitch.

The opposite is also true. In the last couple of seasons, we saw that dynamic. People start pointing fingers, pressure builds, and it becomes harder to perform, leading to even more finger-pointing. We saw spirals in both directions with the Red Sox.

GAZETTE: How do you measure whether a group has chemistry or not?

POLZER: There are lots of indicators of team chemistry. When you see team members helping each other and having fun together, that’s a good sign. Do they support one another even when they make mistakes? A sense of identity can help a team: Do they have a shared sense of what makes them distinctive?

The Red Sox beards were wacky but set them apart. It was a little thing, but it gave players a way to publicly demonstrate their solidarity and camaraderie.

GAZETTE: Who gets to decide whether a group or team has chemistry?

POLZER: Ultimately, it’s up to team members themselves to create chemistry. It usually includes a sense of cohesiveness, shared identity, trust and respect, efficacy — do they have a shared belief in their ability to succeed? Team chemistry is probably a combination of these things, but pinning it down exactly is elusive.

For baseball, it includes helping teammates do well. If you learn things about an opposing pitcher, do you share that with a teammate to help him do well, even if he plays your position and might take your place? Are teammates willing to make sacrifices for the good of the team? Lots of little things can contribute to team chemistry.

GAZETTE: What is at work when a group performs better together than they would as individuals, this idea of the sum being greater than its parts?

POLZER: In most business teams, to be greater than the sum of the parts is to combine expertise in order to make higher-quality decisions than if you were acting individually. Good teamwork is an investment. It takes time to work through decisions to integrate your work activities, and help your teammates. What do you get for that investment? When you succeed, the collective performance is better than anything people could accomplish alone and could pay off in a championship, good decisions, creating a great product, or other goals teams aim to accomplish.

Lots of teams are less than the sum of their parts. They spend time together, which is costly, but they have too much conflict, point fingers, or take credit for others’ work. They don’t share information or cooperate; they act in their own interest, but the team goes downhill because of dysfunctional team processes.

GAZETTE: Can you create chemistry?

POLZER: Leadership comes into play. Having a good clear goal helps, as does giving team members a sense of ownership in deciding how to reach that goal, and making sure they have the resources they need and clear accountability for individual roles and responsibilities. Having fun together always helps, as you could see with the Red Sox.

POLZER: When things are going poorly, an obvious way to try to reverse a downward spiral is to get some new players. If you think of [2012 manager] Bobby Valentine and how the previous season ended in a negative way, shaking up the roster helped. Most importantly, Cherington looked for players who wanted to play in Boston and were motivated to be good teammates, not just talented individuals.

They also had a new manager who helped to give them a fresh start, informing a new identity as a team. Like a lot of managers, John Farrell deflected criticism along the way and publicly supported his players, giving them a buffer as they redefined their relationships and their image.

They also got off on the right foot by winning early in the season. That’s critical when you are trying to reverse a downward spiral. The best way to increase confidence is to see some positive results.

POLZER: It’s hard to maintain chemistry during extended stretches of poor performance, especially if team members start to blame each other. Trust and respect can take a long time to build and a short time to destroy. If one or two players start to act selfishly by doing things that are good for their individual stats or careers but bad for the team, it can become contagious as teammates lose respect for one another. Teams can unravel quickly when a few players put their own interests ahead of the team.

It’s easy to have good chemistry when you’re performing well. The test is whether a team can maintain those dynamics when they hit a rough stretch. Those who do become more resilient as a result. Having strong leadership from within the team helps a lot, especially when high-profile players set a good example. You see this dynamic whether it’s a senior executive team or a pick-up basketball game. On the Sox, veterans like Dustin Pedroia and David Ortiz are great role models of the behavior you want the whole team to exhibit.

GAZETTE: Lots of companies focus on “teamwork” and try to get their employees to operate like a sports franchise. But given that most workplaces don’t function like athletic competitions, is that a worthy, achievable goal?

POLZER: There are parallels. If you have a small team — say a dozen or fewer people — you can build a strong sense of team identity, and the people can really bond together. They support and trust each other, push each other to perform better, and the team becomes a source of pride. All sorts of good things can happen when you have strong teams in an organization, including healthy levels of competition.

GAZETTE: Why do you think sports teams tend to be so effective at community building both inside their organizations and outside? Are there lessons they can teach companies?

POLZER: Sports teams are inherently tied to specific cities or regions, often wearing the city or state name on their uniform, which bonds them to the community. Far-flung companies have a harder time becoming a source of pride for any one specific location. That said, many teams build local support by doing community service outreach activities that companies could emulate.