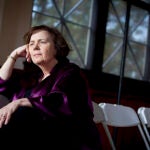 When things changed for women

Make no mistake: Although the 2016 Iowa caucuses are still 27 months away, the machinery for would-be candidates in both political parties is busily cranking away behind the scenes.

For those who make their living working and watching electoral politics, it’s not too early to consider who might be the next president. Trey Grayson, director of the Institute of Politics (IOP) at the Harvard Kennedy School, gathered a panel of experts Tuesday evening at the John F. Kennedy Jr. Forum to ponder the field of likely Democratic and Republican contenders and to assess their chances.

The panelists included Paul Begala, a Democratic strategist and CNN contributor; Robert Costa, a rising young media star as Washington editor for the National Review and a CNBC political analyst; Karen Finney, a former director of communications for the Democratic National Committee and an MSNBC host; and CNN/CNN Espanol political contributor Ana Navarro, who is a 2013 fall fellow at the IOP.

Here’s how the panelists handicapped the possible contenders at this point:

Both Begala and Finney, who have extensive ties to both Bill and Hillary Clinton, say that despite speculation that Hillary is playing coy about her true intentions, she hasn’t decided if she will run in 2016.

“I really don’t think she knows. But if she does decide to run, the seeds are there and ready if she does do it,” said Finney, who worked on Clinton’s 2000 U.S. Senate run.

Although she is the best-known political figure out there, the problem for the Democratic Party if she does run, Begala said, is that Democrats have a tendency to like new faces, and the party in power has only won three consecutive elections once in the post-World War II era.

“I think the Democrats’ best shot by far, maybe their only shot, is if Hillary does run,” said Begala. “It can happen,” given the historic nature of her candidacy as a woman, “but she’s running against the culture and tradition of her own party.”

Outside of the rank and file who still lean on the old caricature of Hillary Clinton as a left-leaning first lady with a “failed” stint as secretary of state because of the Libyan attack at Benghazi, high-level strategists on the right see her as a formidable but not insurmountable opponent, said Costa.

“Republicans say it’s going to be very hard to beat her if she runs. They assume she’s a presumptive Democratic nominee if she runs, but they don’t think she’s unbeatable,” he said.

The only real challenge for Clinton would be if a dark horse candidate came in as the anti-Hillary or anti-establishment candidate, a prospect that would be “good” for her, the panel concurred.

“I like tough, mean, rough primaries,” Begala said. “It helped Barack Obama, that death march with Hillary. It was the best thing to happen to the Democratic Party. Nevada alone became a Democratic state because of the Hillary-Barack death march.”

“And it hurt John McCain not to have it and to be sitting there for three months,” said Navarro. “[Clinton has] been out of politics for a long time. She’s rusty. …  I think politically she would benefit from having a primary.”

The panel agreed that there’s little chance Biden will take on Clinton for the nomination if she runs. But should she opt out, he has the experience and desire to make him the likely early front-runner.

“Running for president is like having sex: You don’t do it once and then stop,” said Begala of Biden’s two-plus decades of often running for president. Biden has the ability to “stitch together” a coalition of young people, African-Americans, and Latinos that defines the nation’s shifting electorate, and he would likely bring in more white, working-class voters than Obama did.

Navarro said that if Biden can overcome his persona as a gaffe-prone “Uncle Joe,” he has a good shot given that he is actively organizing and has been showing up at events in Iowa and South Carolina that suggest he’s gearing up for another run.

“I don’t see anybody working as hard right now to put together a coalition. I can tell you anytime there’s three Democratic Hispanics in the room, Joe Biden shows up. He’s like the Holy Spirit.”

While the panelists agreed that former Florida Gov. Jeb Bush would be the most “formidable” Republican candidate if he ran, Christie is still in the early front-runner mix. Costa said the complaints about Christie’s so-called embrace of Obama during Hurricane Sandy last year haven’t permanently damaged his brand.

“He doesn’t have a [Mitt] Romney hair on his back in terms of policy. Look, he may have to let [Sen. Ted] Cruz win Iowa, maybe let someone like Rand Paul or Cruz win South Carolina. But if you’ve ever seen Gov. Christie do a town hall, he wins hands down. And he can go into New Hampshire and win New Hampshire, do well in Florida,” Costa said. “The Romney donors love this guy, and that’s going to be important. That’s still an important bloc within the party, as much as Cruz is getting all the attention.”

“He’s going to get strong numbers from all the people that Republicans need in order to broaden the base and win a national election,” Navarro said. “I think that’s going to be his most persuasive card.”

In order to secure the nomination, Begala said Christie would have to disavow core positions, as Romney did. “He’s going to have to pretend he doesn’t believe in evolution or gravity or photosynthesis or electromagnetism. He’s going to have to say that ‘The Flintstones’ [is] a documentary. He has no idea how crazy the base of his party is.”

It’s not likely he’ll disavow such positions, said Navarro. “What Chris Christie brings to the table is Chris Christie. The fact is that he’s so genuine that he is this anti-Romney in his authenticity and his emotion, and just being bigger than life, larger than life, louder than life — he just can’t do that,” she said.

“He’s one of the few winners in this [recent government] shutdown because he really effectively knows how to straddle the middle,” Navarro said. “He was the guy talking about compromise, and getting away with talking about that, and still having the support with the base.”

Costa said given the 20-plus years that Paul and his father Ron have been active in politics, he’s in a strong position right now. “Rand Paul knows how to play politics. He knows it, he has a strong strategic staff around him, he’s already working all the Romney donors. He’s trying to cast himself in a new light.”

“He had the perfect position staked out,” Finney said of Paul’s recent effort to tone down Tea Party rhetoric and to appear conciliatory but still principled during the federal government shutdown. “It definitely shows you he’s consciously trying to build a persona.”

Costa noted that Bush hasn’t been on a ballot since 2002. “I don’t see the hunger to run. [Despite] the clamor among the elite donor class, people don’t think of him in Iowa; they don’t talk about him in New Hampshire and South Carolina.”

“Rubio seems to be nowhere right now. Immigration was going to be his thing, and then that didn’t quite work out,” Finney said. “It doesn’t feel like he has a vision like ‘This is going to be my pathway’ like Cruz [does].”

“He’s got to find a way to thread the needle on immigration,” Costa said. “He seems almost skittish now about where he fits on the right spectrum. He just doesn’t have a comfort level with his politics that’s settled and is going to drive him forward.”

“I want him almost as much as I want Hillary,” Begala joked. “I love, love, love Ted Cruz. This is what Republican primary voters want.”

Navarro suggested that Cruz’s hard-line tactics and his failed bid to defund the Affordable Care Act would be a mixed blessing for him come election time. “I think Ted Cruz is making a lot of friends in the base, but he’s also making a lot of enemies on the right because he has no problem going after other Republicans — something Rand Paul is not doing, something Marco Rubio is not doing,” she said.

In an effort to build his brand, Cruz has made strategy and tactics the battlefront, Costa said. “As Cruz heads into 2016 now, he’s going to out-conservative anyone on tactics. And if you disagree with his approach, suddenly you’re a ‘Republican in name only.’ That’s going to set him up for the primaries, regardless of whether he’s taken a bold policy position. It’s all tactics. That’s the civil war. That’s what Cruz thinks he can win. That’s the stakes.”