Catching up on health care 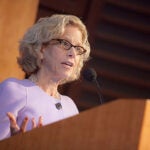 New test for Down syndrome

Amid intense political controversy, a federal government shutdown, and technical challenges, health insurance exchanges opened across the country on Oct. 1, a key step in implementing the Affordable Care Act.

John McDonough, a professor of the practice of public health at the Harvard School of Public Health (HSPH) and director of the School’s Center for Public Health Leadership, played an important role in the passage and implementation of Massachusetts’ 2006 health care overhaul, and from 2008 to 2010 advised the U.S. Senate Committee on Health, Education, Labor, and Pensions on health care reform.

He spoke to the Gazette about the exchanges, and about even more sweeping changes to the U.S. health care landscape set for January.

GAZETTE: What happened on Oct. 1 with respect to health care reform and why was it an important step in the implementation of this law?

McDONOUGH: On Oct. 1, the state and federal health exchanges opened up for the first time in all 50 states for uninsured individuals to begin to enroll in coverage, beginning on Jan. 1.

GAZETTE: Can you describe the exchanges a little more? Are they the main mechanism by which this law extends insurance to those who are not covered?

McDONOUGH: The law extends insurance in two ways. One way is by expanding eligibility for Medicaid enrollment to all low-income individuals with incomes below 138 percent of the federal poverty line in those states that chose to adopt the expansion.

Currently, there are about 26 states that are choosing not to adopt the Medicaid expansion, though some are negotiating with the federal government. So that is the first way for lower-income individuals to get coverage.

Individuals with incomes between 139 and 400 percent of the federal poverty line are eligible for subsidies to keep the cost of premiums and the potential cost-sharing affordable for those individuals.

GAZETTE: What is the next major part of this law to go into effect?

McDONOUGH: On Jan. 1, probably the most extensive set of changes in the entire implementation of the law goes into effect. So on Jan. 1, every state that opts to expand Medicaid will expand coverage for everyone who signs up for it. And also on Jan. 1, every individual who signed up by Dec. 15 to enroll in private health insurance coverage — whether subsidized or not — will see their coverage period begin.

Also on Jan. 1, the tax subsidies for premiums and cost-sharing protection for consumers launch. Also, Jan. 1 is the first day that all Americans who can afford to do so are required to buy insurance or else they will pay a tax penalty when they file their taxes.

Jan. 1 is the day when health insurance and health coverage in the United States fully launches its fundamental transformation.

GAZETTE: What is the most important thing for a member of the public watching this grand drama to know?

McDONOUGH: Of all of the leading industrial nations in the world, the top 30 — let’s say the OECD [Organization for Economic Cooperation and Development] nations — there is only one of those advanced, affluent nations that permits its citizens to suffer financial ruin because they or a member of their family gets sick. And that is the United States.

And beginning on Jan. 1, we pass a fundamental marker toward ending that human tragedy and travesty. It will take a little bit longer to achieve that for all Americans because of the Supreme Court’s [July 2012] decision to make Medicaid expansion a state option, but I would say within five years, we will join every nation that presumes to call itself advanced in providing a basic level of health protection to all of our citizens and legal residents.

GAZETTE: Is there anything else you think is important to know about the ACA?

McDONOUGH: I think the other thing to keep in mind is that while most of the public focus around the ACA involves insurance coverage, there is much more in the law that will improve the U.S. health care system.

The ACA includes a robust set of initiatives to improve the efficiency, effectiveness, and quality of medical care delivery in the United States. That’s hugely important and has been going through implementation for some time…. For example, hospitals in the U.S. with very high rates of readmission of Medicare patients and [high rates of] hospital infections are now paying a penalty back to the federal government.

There are a host of other kinds of initiatives, all attempting to change the fundamentally illogical incentives in our health care system toward smarter and more effective care for everybody. There’s a lot on public health and prevention, on the health care workforce. There is so much there.

The last thing I would say is that a lot of people say, “I don’t understand Obamacare.” But I think it’s fair to say most Americans have only a vague familiarity with the underlying U.S. health care system because we have the most complex and the most difficult to understand system in the industrialized world.

So it shouldn’t be that much of a surprise that a comprehensive reform of that system will be pretty darn complicated as well. That’s one of the primary reasons people find the ACA difficult to understand.