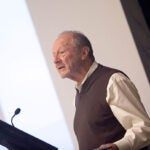 A farewell to arms

This is the eighth in a series of stories about Harvard’s engagement in Latin America.

COBQUECURA, Chile — First there was only gentle sleep, but suddenly and horrifyingly it was shattered by tremors, and confusion, and destruction, and floods, and flight, all leading toward tragedy.

An 8.8-magnitude earthquake struck Chile on a February night in 2010, toppling buildings and driving thousands into the streets. The quake, the sixth largest recorded by a seismograph, triggered a tsunami that ripped houses from their foundations and hurled fishing boats into downtowns. Nature’s powerful one-two punch killed hundreds and changed the lives of millions of Chileans.

“We thought the sea was going to swallow us,” said Gladys Ulloa Ortiz, a resident of the small southern coastal town of Perales. She fled through the dark with her husband and two children to higher ground just ahead of the rushing wave.

After the disaster, Ulloa Ortiz, who made her living harvesting shellfish from the shore, was too frightened to return to her work. She is one of thousands whose lives and livelihoods were upended by the calamity. And she is one of many who have been getting back on their financial feet with support from the Harvard initiative Recupera Chile.

To support her family, Ulloa Ortiz eventually opened a small kiosk in town, a kind of variety store that sells items ranging from candy to empanadas.

“Thanks to Recupera Chile … I’ve got my little business. It’s not very big, but all the same,” she said while smiling on a recent rainy morning, “I went forward.”

Helping people to move forward is the guiding ethos of Recupera Chile, an initiative based at Harvard’s David Rockefeller Center for Latin American Studies (DRCLAS). The program helps to connect researchers and students from Harvard institutions — including the Kennedy School (HKS), the Graduate School of Design (GSD), the Graduate School of Education (HGSE), the Medical School (HMS), and the School of Public Health (HSPH) — with Chilean academicians, government officials, community leaders, and local residents to work toward long-term, community-based recovery.

Doug Ahlers, who teaches courses on disaster recovery and community development at HKS, directs Recupera Chile, which is modeled after the School’s Broadmoor Project, an initiative begun in 2006 to help the New Orleans Broadmoor neighborhood recover from Hurricane Katrina. Harvard students have long been a critical part of the New Orleans effort.

The same is now true for the Recupera area. Last year, 20 of Ahlers’ students traveled to the country’s southern coast, helping inhabitants of the severely damaged communities of Perales, Dichato, and Cobquecura.

“So much recovery is beyond the public sector,” said Ahlers, an adjunct lecturer at HKS. Government agencies are effective in the immediate aftermath of a tragedy, he said, providing leadership and rebuilding critical infrastructure. But helping families and communities piece their social and economic fabric back together takes much more.

Helping communities to help themselves

Central to that slow, multiyear process is helping communities to develop themselves. Ahlers and the leaders of Recupera Chile are quick to stress that they aren’t direct service providers. Instead, they help residents to solve their own problems.

Thousands of lives were shattered in Cobquecura, a small town about 260 miles from Santiago. With its long stretches of pristine shoreline and rugged surf, the scenic town is both a hot spot for summer beach lovers and wave riders. Though the tsunami spared Cobquecura, the massive earthquake that shook the ground for close to three minutes destroyed nearly 80 percent of its structures.

These days, the town is rebounding. In its commercial center, there are few piles of bricks and stone that were once shops or houses among the rows of new construction. The staccato whack of hammers fills the air as residents build and rebuild amid lively new markets made up of small stalls that offer shoppers everything from kitchen cabinets to bulbs of fresh garlic.

Residents hope that the village, a national heritage site because of its profusion of traditional adobe construction, will again become a symbol of Chilean pride.

Producing adobe is a labor-intensive process using brick composed of a combination of water, clay, and straw, which is then dried in the sun. While government officials argue that traditional adobe is unable to resist seismic waves, Ivan Cartes, a professor of architecture at the University of Bío-Bío and a close partner of Recupera Chile, is hoping to come up with a machine that will create bricks that are better able to withstand earthquakes.

Cobquecura’s extensive damage left hundreds of residents in small, wooden shelters with zinc-coated roofs called mediaguas. When reconstruction efforts at one point stalled, “the mediaguas became the anti-icons of reconstruction,” said Cartes. But through Recupera Chile, Cartes connected with former GSD professor Miho Mazereeuw, and her student, GSD graduate Melissa How, who worked to transform temporary homes from a symbol of despair into a sign of hope.

For years Fernando Ortiz, a self-taught surfer with a baseball cap and earnest public-spirited concerns, advertised his surfing lessons on a small sign attached to a roadside post. After the earthquake, Ortiz converted a mediagua near the ocean into a makeshift office and surf school. But the low-slung building, well hidden by a straw-covered fence, looked more like a house to passers-by than a surf shop. Its design discouraged potential customers from stopping.

“The layout of the existing structure was hurting his business,” emailed How, who worked with Cartes and Ortiz, the winner of a contest for entrepreneurs backed by Recupera Chile, to develop a new plan for the building. They raised the roof to make room for long surfboards and let more sunlight in, and introduced a window with a counter that opens onto an expanded front porch with log benches and a fire pit. The new design draws in curious passers-by, said How, and offers surfers a gathering place to “share the stories that are such a large part of surf culture.”

Inside the little shop, colihue, a type of bamboo, covers the walls, along with a vibrant mural painted by a local artist that depicts a surfer tucked into the curl of a giant wave. In addition to offering surf classes to tourists, Ortiz volunteers at a local school teaching young students to swim and surf.

As the sun slipped past the horizon, and Ortiz’s wolfish dog nuzzled the hand of a stranger, he explained that teaching local youths not only to surf but also to protect and respect their natural resources will make a lasting difference in the community.

“Through surfing,” he said, “we can make a change.”

Farther south, in Dichato, another small town tied to the sea for survival, Jessica Cabrera Torres drove her oars through a dark green bay, trying to outrace the approaching rain and choppy seas. With a mix of ease and determination, she guided a small group to her fishing boat “Acuimarc” for the short ride to her sliver of ocean, a watery rectangle marked by blue plastic barrels where she farms mussels and oysters. Her work is the result of an ongoing aquaculture research project supported by the University of Concepcion and Recupera Chile.

Cabrera Torres said she is eager to bring her livelihood back to an area that was ruined by overfishing long before the tsunami devastated Dichato.

“The challenge is to change the mentality in the fishing community. If you catch a fish and you sell it, you have money in your hand. But what we are trying to do takes a different kind of understanding, and a long time.”

That extensive plan, explained Judith Palfrey, Harvard’s T. Berry Brazelton Professor of Pediatrics, involves the proposed reconstruction and revitalization of the local fish hatchery destroyed in the tsunami, and creation of an adjoining marine biology center for aquaculture and education. Palfrey has been closely linked with Recupera Chile since she first visited the area right after the disaster to help with medical and mental health support.

On a raw afternoon, Palfrey laughed and chatted with local residents and professors from nearby universities, who work on health, social, and economic projects supported by Recupera Chile. Several visitors enjoyed bowls of steaming seafood stew as a cold winter rain drummed on the roof of one of Dichato’s reconstructed restaurants.

“It’s important,” said Palfrey, “that the marine biology department at the University of Concepcion tell the local government: ‘This hatchery project is important.’ It’s also important to have Harvard say: ‘This is important.’

What Dichato’s residents need more than anything, Palfrey said, “is hope and spirit and things to look forward to. We are looking for ways to build the community’s capacity, and this project could be a beautiful way to do that.”

To move the project forward, several HKS students from Ahlers’ course will visit Dichato in January, tasked with developing a business case for fisheries and aquaculture under the guidance of HKS graduate Matt Stolhandske.

A tall, energetic Texan, Stolhandske traveled to Chile as the teaching fellow for Ahlers’ 2012 course to help nascent small-business people in the three towns apply for government assistance. After graduation, he returned several times, living in the region for months at a time. Today, he divides his time between Cambridge, where he works as a senior research and teaching fellow at DRCLAS, and Chile, where he is the program manager of Recupera Chile.

“I have fallen in love with these communities and feel very strongly about the progress that we are making and the impact that we are having,” said Stolhandske. “Real recovery work looks like an ongoing, sustained presence accompanied by deep relationships fueled by trust. It’s a demonstration of our commitment to help people and local leadership to solve critical problems.”