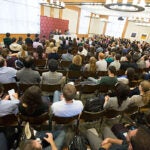 Never let it be said that a U.S. Supreme Court justice doesn’t keep his work close to his heart. During a lunchtime question-and-answer session at Harvard Law School (HLS) on Tuesday, Associate Justice Stephen Breyer reached into his jacket pocket and pulled out a small white booklet.

“This a great document, the Constitution of the United States,” said Breyer. “It’s a fabulous document. I don’t know they how they wrote it. It’s brief. It has general principles. Fabulous.”

Breyer visited his alma mater and former employer for an informal chat with HLS Dean Martha Minow and to take a handful of questions from students. Back on campus to celebrate the 20th anniversary of his appointment to the high court, he also took part in a panel discussion later in the day with several HLS professors who examined his tenure and some of his most notable opinions.

During the afternoon session, one young woman asked a question many students in the crowd were likely wondering: “What does it take to become a Supreme Court clerk?” The answer is: a lot of work.

There are roughly 8,000 cases pointed toward the court each year, said Breyer, who broke down some of the court’s internal workings. Four law clerks for each justice review the cases and write detailed memos about each petition. The justices then review those memos and choose which ones to hear in a process that requires four votes to grant a writ of certiorari, or judicial review.

The final list typically includes about 80 cases. Contrary to what some people think, the justices’ decisions on which cases to hear aren’t based on how much “fun” they think a case might be, said Breyer.

“Our real object is to decide in those cases that require a uniform federal decision, which almost always is where the lower courts have come to different conclusions on the same question of federal law,” he said.

“Mechanics play an important role” in the selection of cases and the decision process, said Breyer. “We’re not there to make some theory about something. We’re there to decide cases. That’s the job.”

Throughout the hourlong talk, Breyer was as quick with an easy joke as he was with a complicated legal argument. When describing his job to his teenage son several years ago, Breyer said: “I read and I write. … So if you do your homework really well, you get a job, and you can do homework for the rest of your life.”

“Yes, absolutely,” said Breyer, saying that the Roman statesman Cicero’s argument that in an emergency people “forget the law” is never the right approach. Instead, Breyer argued for using due process in this age of terrorism to address complicated cases involving enemy combatants. But with such cases, he added, the guiding principle should be the understanding that “the Constitution does not write the president a blank check.”

Asked by one student what the judge’s job meant to him, Breyer responded that it was both a source of fear and enormous pride.

“In the first three years, you are frightened to death. You think, ‘I don’t know what’s going to happen; how do I know I can do this?’ And then after three years, you think, ‘Well, maybe I can, maybe I can’t, but this is the best I can do.’ … It’s a very, very interesting job. But more than that, it matters to people, and that is a tremendous source of satisfaction if you can continuously recognize that and just do your best.”

The dynamic on the nine-member court changes with each new justice, said Breyer, who has seen several new faces beside him on the bench since President Bill Clinton nominated him and the U.S. Senate confirmed his nomination in 1994. But the mood, he added, is always the same.

“In that [weekly] conference, it’s still true, I have never heard a voice raised in anger, and I have never heard someone say something mean about somebody else, not even as a joke. It’s professional. We go around the table and we state our views and listen to the others.”