Women in the law 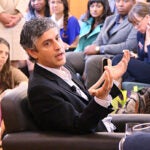 A scholar’s brush with religious ire

600 return to HLS to celebrate 60 years of participation

But on Friday night, beneath a long white tent that stretched almost the entire the length of the gray building next to Holmes Field, women were the focus of attention. Close to 600 of them, and a few men, gathered to celebrate 60 years of women at the School.

On several video screens, images of alumnae appeared side-by-side with photos of their daughters, all HLS attendees. The shots included pictures of Jane Ginsburg, class of 1980, next to her mother, Supreme Court Associate Justice Ruth Bader Ginsburg, who enrolled at Harvard in 1956 but ultimately finished her law degree at Columbia University.

“We’re all sisters in law,” said HLS Dean Martha Minow, who mingled with the crowd for close to an hour before opening the speaking portion of the dinner celebration.

The weekend event, “Celebration 60,” was developed around the theme of women’s leadership and included three days of panel discussions and addresses on topics ranging from women in the judiciary to women as entrepreneurs outside the field of law.

One of those entrepreneurs, who transitioned to a life in letters, was writer and lecturer Susan Cain. The 1993 HLS graduate and author of the best-selling “Quiet: The Power of Introverts in a World That Can’t Stop Talking,” delivered Friday’s keynote address, and discussed how society needs both the skills and expertise of those more comfortable in the spotlight and the strengths and talents of those who describe themselves as introverts.

“This is the next great diversity issue of our time,” said Cain.

While introverts tend to be more comfortable spending a quiet night at home instead of mingling at a bustling party, the phenomenon goes “way beyond socializing,” said Cain, and has major implications for innovation and leadership.

According to Cain, the key factor that distinguishes the two personality types involves stimulation. Introverts, she said, feel most alive when there is “less stuff” coming at them. Great innovators such as designer Philippe Starck, investor Warren Buffett, writer J.K. Rowling, and scientist Albert Einstein all shared an important trait: the need for solitude as a way to engage in serious reflection.

Einstein, said Cain, was famous for his admission that he wasn’t smarter than everyone else, he was simply willing to “stay with problems longer.” The same is true for Rowling, who was on a train staring out at a field of grazing cows when she the idea of a boy wizard suddenly struck her. Instead of rushing home to churn out a book, Rowling spent five years carefully developing the story.

“It was that kind of a process, the process that is often maligned in our … ‘think-fast, act-fast’ type of culture,” said Cain, “that brought us ‘Harry Potter.’ ”

Introverts also make great leaders, said Cain. People naturally gravitate to introverts because of their passion for handling one or two things, she said, and introverts know how to push themselves out of their comfort zones and “draw on their natural strengths.”

Cain emphasized that there is no “one-size-fits-all” environment, with extroverts and introverts alike capable of making critical contributions in boardrooms and beyond. She encouraged introverts in the crowd to be well prepared ahead of meetings, be ready to speak up early, and be sure to schedule the quiet, reflective time they need. Respect that time, Cain said, “as intensely as you would a business meeting.”

Extroverts, Cain suggested, should do things like schedule one-on-one meetings with introverts, and make an effort to reserve their own solo time.

In closing, Cain urged her listeners to join the quiet revolution and “think a little bit differently about what it means to be quiet.”

In collaboration with the celebration, the Harvard Law School Library is hosting the exhibit “Women at HLS: 60 Years of Transformation” in the library’s Caspersen Room. The show is on view through Dec. 13.