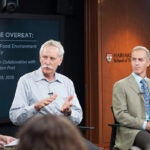 The whys of rising obesity

Pushing the boundaries of regenerative medicine, Howard Green helped save two young burn victims in the summer of '83

His young body ravaged by fire, the boy looked at the nurse wheeling him into the operating room.

The words have echoed through the decades, from a Boston operating room in the summer of 1983 to similar places around the world where similar sentiments have accompanied similar operations, and lost none of their power. In a neat house on a quiet Brookline street a Harvard Medical School (HMS) professor’s wife tells the story.

Those words changed everything, she adds.

It was either 5-year-old Jamie Selby or his brother, 6-year-old Glen, who spoke on that summer day. The plea’s power rather than who said it struck the doctors and nurses caring for them.

The adults were attempting what they deemed the boys’ only hope: transplanting laboratory-grown skin created through a new procedure pioneered by Professor Howard Green. It had been tried in small test cases before, but in those, the patient could have been treated with traditional skin grafts, where skin from another part of the body is taken to cover a burned area. Cases like that of the Selbys, where there was little unburned skin left to graft, had left doctors with few options. They could provide medication for the constant pain and wait for death. The new procedure offered hope where there had been none.

“He basically turned his whole lab to the effort to save those boys.”

The boys had been burned when flammable solvent caught fire while they were playing in a vacant house near their Wyoming home. A friend died in the fire; the Selbys were flown to burn specialists in Denver, who had heard of the work being done in Boston.

From a small patch of unburned skin, Green and the fellows and students in his lab on HMS’s quadrangle had grown healthy skin that, once transplanted, would develop and thicken until it became nearly indistinguishable from normal skin.

But the doctors and nurses treating the boys still had their concerns. They questioned the wisdom of attempting unproven measures on little boys in constant pain, with bodies difficult to look at, so scorched that the only patches of healthy skin were on the soles of their feet and the crease at the top of their thighs. But the words banished any lingering doubt.

“There’s no question they would have died [without the treatment],” said Nicholas O’Connor, then-chief of the burn unit at the Shriners Burns Institute of Boston, who conducted the transplant operations. “[But] they were game to live. . . . Taking care of burn patients is difficult sometimes. You do all this for them but they may not make it out of the hospital.”

The Selby boys survived to leave the hospital and lived for decades. The treatment proved the power of lab-grown human skin, and provided hope for victims of severe burns. Green’s method was the first to harness the power of stem cells to regenerate a patient’s tissues, ushering in an era of regenerative medicine that continues to develop today.

“It’s really the first stem cell therapy. It was way ahead of its time,” O’Connor said.

In 1974, neither Howard Green nor graduate student James Rheinwald was thinking of burns and skin transplants. In Green’s lab, then at the Massachusetts Institute of Technology, the focus was on embryos and embryonic development.

To gain insight into how a few cells can develop into the body’s diverse array of tissues, they were studying teratomas, tumors that, like embryos, are made up of many different tissues, including teeth, bone, and hair.

While examining a mouse teratoma, Rheinwald noticed a smooth patch of what looked like skin. It was made up of cells called keratinocytes, a skin building block. Prior attempts to culture keratinocytes had failed, but the key observation from the teratoma was that the keratinocytes were growing together with structural cells called fibroblasts.

Green, who had successfully cultured fibroblast cells years earlier, had a ready supply. He and Rheinwald first irradiated the fibroblasts to stop them from crowding out the keratinocytes, and then incubated the two cell types together.

The keratinocytes grew readily, so Green and Rheinwald tried the same experiment on human keratinocytes and got the same result. Green, realizing that the advance had the potential to help burn victims, contacted O’Connor, who before moving to Shriners was head of the burn unit at what was then the Peter Bent Brigham Hospital.

“[Green] was unusual in having both extraordinary scientific instinct and rigor … while, with his medical training, he always had a good sense of when something might be applied to a clinical problem,” said Rheinwald, today an associate professor of dermatology at HMS and at Harvard-affiliated Brigham and Women’s Hospital.

O’Connor, working with physicians at the Brigham and, later, at Shriners, began experimenting using Green’s lab-grown skin for transplants. The pair did the first human transplant in 1980 — the same year Green moved to HMS — on two patients, growing skin patches from biopsies of the patients’ healthy skin and transplanting them.

“Once we learned how to grow the cells, it was obvious what we were going to do,” Green said. “Use them for people with third-degree burns.”

The effort to treat the Selbys consumed Green’s lab. To provide enough skin to help the boys, it had to be converted overnight from a research operation to one dedicated to manufacturing grafts of their skin.

“He basically turned his whole lab to the effort to save those boys,” said O’Connor.

Green realized that research was incompatible with growing large amounts of skin for grafts, so he founded a company, Biosurface Technology — bought by Genzyme in 1994 — to handle commercialization of the process.

Licensing the process to an outside company allowed Green to return his focus to research. Later work in his lab showed that the keratinocytes in the skin grafts consisted of three cell types, one of which is an adult stem cell that provides most of the grafts’ proliferative capacity. The presence of stem cells explains why the grafts, transplanted as thin sheets mainly made up of the skin’s upper layer, the epidermis, continue to grow and thicken, adding a deeper layer, the dermis, over ensuing months.

In the decades since, stem cell research has grown rapidly. Today, researchers are generating new knowledge about how our bodies function and making advances in regeneration of damaged tissue — as Green did in the early 1980s.

Green, now the George Higginson Professor of Cell Biology, has won accolades for his efforts, including the 2010 Warren Alpert Foundation Prize, which recognized his work with skin stem cells, and the 2012 March of Dimes Prize in Developmental Biology, which went to Green and a former fellow, Elaine Fuchs of Rockefeller University, for their insights into skin stem cells and skin diseases.

“There’s always the basic question of how it’s made.”

Last year, Green and his wife, Rosine, were having dinner at home when the phone rang. It was Anice Kruger, a South African mother whose daughter, 3-year-old Pippie, had sustained burns over 80 percent of her body — “everywhere but her bum” — in an accident at a family barbecue. Anice had found the Greens’ number on the Internet.

Green referred Anice to Genzyme, which is still using his technique to grow skin for badly burned patients. Samples of Pippie’s skin were flown to Boston, where technicians grew grafts and handed them to a medical courier for a race against the clock. The grafts are viable for 24 hours; the long flight to South Africa left little time to spare. When the plane landed, an ambulance was waiting and sped the grafts through Johannesburg’s rush-hour traffic to surgeons ready to operate. A week later, the procedure was declared a success, with 90 percent of the 41 grafts taking hold. Anice spoke to a local newspaper after the operation.

HMS Professor Howard Green developed the first therapeutic use of cells grown in the lab. Before stem cells gained fame, he cultivated them to generate skin grafts for burn patients.